HOGAN, DEL. GOV UNITE AGAINST POWER COST HIKES: Maryland Gov. Larry Hogan is joining forces with Delaware Gov. Jack Markell (D) to fight an increase in electricity rates to cover the cost of a power line that will connect Delaware to a nuclear power complex that sits off its shores, Ovetta Wiggins reports for the Post. The director of the Maryland Energy Administration said that at least 385,000 Maryland residents would be affected by the rate increases. She estimated that the average customer would pay $2 to $3 more a month.

UM CHIEFS GET RAISES: It may be lonely at the top, but there are some perks, writes Daniel Leaderman for the Daily Record. Leadership at 11 of the 12 University System of Maryland institutions will be getting raises in the coming fiscal year, most of no more than 3.5%. University of Maryland, College Park President Wallace Loh is getting the largest increase of $73,723, or 14%, bringing his total fiscal 2017 salary up to $600,314, according to data provided by the university system.

OD DEATHS IN MARYLAND UP: Data released Wednesday by the state Department of Health and Mental Hygiene show the number of drug and alcohol overdose deaths within the first quarter of the year rose more in Anne Arundel County than in any other jurisdiction in the state. There were 383 overdose fatalities in Maryland within the first three months of the year — with 45 reported in Anne Arundel, the statistics show, Lauren Loricchio reports in the Annapolis Capital.

NEW LAWS TAKE EFFECT: From the AP at WTOP-AM, here are the laws that are set to go into effect tomorrow, July 1, in Maryland, including a minimum wage hike.

DEM LAWMAKERS SEEK TOUGHER GUN LAWS: Democratic members of Maryland’s congressional delegation gather in an attempt to maintain pressure on the issue of gun safety legislation. Maryland gun-safety advocates met in Baltimore to support tougher laws connected to gun violence, setting up what could be an interesting debate next week on Capitol Hill. After last week’s sit-in on the House floor, many of Maryland’s Democratic members of Congress, along with gun violence prevention advocates and victims of gun violence, made an attempt to keep up the pressure on the issue, addressing a crowd in north Baltimore, reports Lowell Melser for WBAL-TV. 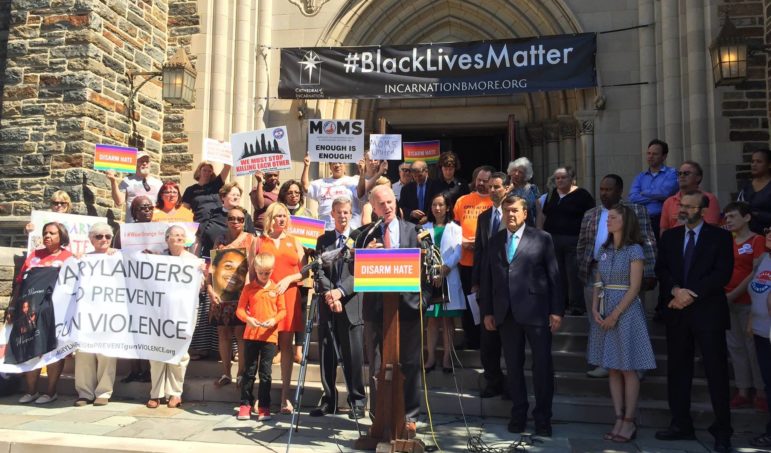 At Cathedral of the Incarnation in Baltimore, Rep. Chris Van Hollen at the podium and other Maryland congressmen and officials gather to support push for congressional action on gun laws. From Chris Van Hollen’s Facebook page.

UK SHOULD INVEST IN MARYLAND: Britons voted to leave the European Union last week. The United Kingdom’s departure from the EU could spell opportunity for Maryland. Nervous UK investors seeking new homes for their capital should find one in Maryland, Richard Douglas writes in an opinion piece in MarylandReporter.com.

NEW MO CO SCHOOL CHIEF: Jack Smith is not flashy. He describes himself as calm and persistent, a 58-year-old onetime English teacher who steps into the top schools job in Montgomery County on Friday with plans to parse data and listen as he sorts out how learning can be improved in the high-achieving district, Donna St. George writes in this profile for the Post. “I’m much more of a rock than a rock star,” said Smith, whose career in education spans more than three decades and includes recent high-level state posts.

CARROLL SCHOOL CLOSINGS OK’D: The Maryland State Board of Education on Tuesday upheld the Carroll County school board’s decision to close three schools, reports Jeremy Bauer-Wolf for the Frederick News Post. Appeals came before the state board to save Charles Carroll Elementary School, New Windsor Middle School and North Carroll High School. The Carroll County Board of Education voted in December to close them.

PUGH HOLDS DEBT-PAYING FUND-RAISER: The Democratic nominee for Baltimore City mayor, Catherine E. Pugh, was set to hold a fundraiser last night at the Baltimore Convention Center to try to pay off the substantial debts she incurred during the primary race, including a last-minute loan from Jim Smith, the two-term Baltimore County executive and former Maryland Secretary of Transportation, Mark Reutter reports for Baltimore Brew.

A CONSERVATIVE’S DILEMMA: A question has confronted him daily for months, writes Towson professor Richard Vatz in the Sun.  Am I going to vote for Donald Trump? Vatz looks a the dilemma facing conservatives as November approaches.

BEZOS AND THE POST: There is a very long and fairly interesting story in New York magazine about The Washington Post under the ownership of Jeff Bezos. Yet entirely missing from the story, much of which can be skipped by readers familiar with the background, is any mention of local news and its place in the new scheme of things. First mention comes in a comment on the story.