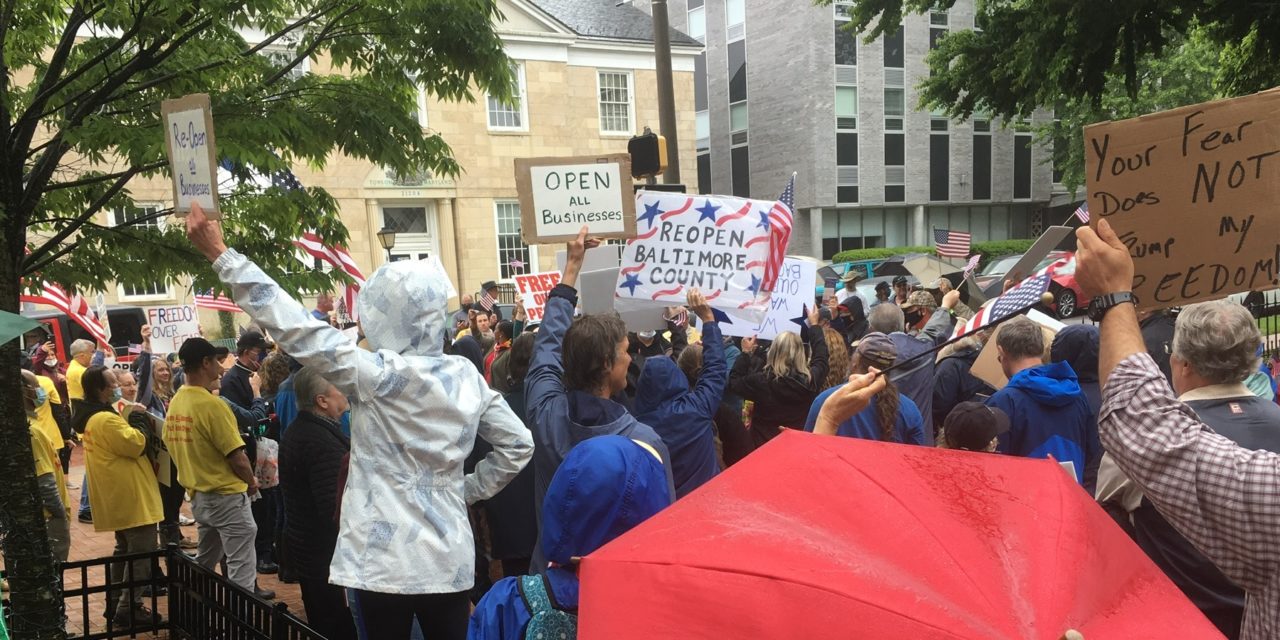 The corner of Washington and Chesapeake in central Towson by the old courthouse is not very busy in these days of pandemic. But Friday afternoon, passing motorists made it a noisy intersection as they honked their horns in support of the 150 or so demonstrators demanding that Baltimore County reopen. County Executive Johnny Olszewski is one of several Maryland executives who has placed more restrictions on local businesses than Gov. Larry Hogan. MarylandReporter.com photo by Len Lazarick

63% OF MARYLAND AGREE WITH RESTRICTIONS: Patrick Gonzales of the Gonzales Poll writes for MarylandReporter that his company’s latest poll finds that statewide, the majority of Maryland voters – 63% – think the restrictions that have been put in place to prevent the coronavirus from spreading “have been about right.”

COUNTY LEADERS DECRY HOGAN INACTION: Leaders in Maryland’s largest jurisdictions say they were left high and dry when Gov. Larry Hogan (R) allowed them to decide when they “felt ready” to ease pandemic-related social distancing restrictions that have crippled the economy and paralyzed daily life since mid-March, Erin Cox of the Post reports.

WITH 349,300 JOBS LOST, RECOVERY TO BE LONG: The numbers in Maryland’s latest labor report are troubling with 349,300 jobs lost and business leaders say it is going to be a long road to recovery, Bryan Renbaum of MarylandReporter is reporting.

CROWDS FLOCK TO AREA BEACHES: In this regional roundup of Memorial Day weekend activity, Joe Heim, Rebecca Tan, Laura Vozzella and Julie Zauzmer of the Post report that social media images of a crowded Ocean City boardwalk and an unmasked Virginia governor mingling with beachgoers had many wondering whether safety guidelines meant to contain the disease were being taken seriously enough.

2nd WAVE POSSIBLE, RESEARCH SAYS: Maryland is at risk of a second wave of coronavirus infections if the state reopens too quickly or without proper precautions, according to new research from Imperial College London, Wilborn Nobles of the Sun reports. Assuming states will see increased mobility after relaxing restrictions, researchers created a model to estimate the virus’ spread over the next eight weeks from May 17.

CASES UP BY 839: Maryland added 839 confirmed cases of coronavirus to its tally Monday as hospitalizations due to the virus continued to decline slightly, reports John-John Williams for the Sun.

PLAINTIFFS APPEAL TO STRIKE DOWN STAY- AT-HOME ORDER: Several state lawmakers, religious leaders and other plaintiffs are appealing a federal judge’s refusal to strike down a stay-at-home order and other restrictions that Gov. Larry Hogan imposed in response to the coronavirus pandemic, the AP is reporting.

OPINION: WHY THE LAWSUIT FAILED: In a column for the Frederick News -Post, Walter Olsen writes about why the lawsuit failed, beginning with the fact that the “U.S. Constitution does not generally bar restrictive state public health measures. … such laws fail only if they have ‘no real or substantial relation’ to preventing disease.”

SOME FAMILIES HIT TWICE AS HARD: Paige Leckie of Capital News Service writes about the impact that Covid-19 has had on already financially and health-stressed families in Maryland, in particular one family in Salisbury. The article appears in MarylandReporter.

RESTAURANT INDUSTRY SUFFERS HEAVY LOSSES: The Maryland Restaurant Association estimates that roughly 45% of Maryland restaurants have closed since the pandemic, 25% of whom will likely close permanently. The industry statewide lost $1.4 billion in March and April alone, a figure that will likely continue to increase as the lockdown lingers, Samantha J. Subin writes for the Daily Record.

ANNAPOLIS TO CREATE RESTAURANT ‘RECOVERY ZONES:’ Annapolis Mayor Gavin Buckley, who is a restaurant owner himself, is planning to create recovery zones, where streets would be shut down, tables would be set up and outdoor dining would be allowed, Jeff Abell of WBFF-TV reports. He wants to establish one zone in every business district throughout the city.

INDEPENDENT VOTERS SHUT OUT OF JUDGE RACES: This primary election, Howard County has one of the most competitive races for circuit court judge in recent decades. Three lawyers are trying to defeat a sitting judge. Yet, more than 42,000 unaffiliated and third-party voters – 20% of registered voters – get no say on who sits on the bench. The disenfranchisement is even worse in Montgomery County, reports Len Lazarick for MarylandReporter.

TELEMEDICINE POISED TO CHANGE HEALTH CARE: Thanks to recent changes in insurance law and an urgent need to reduce social interaction, the use of telemedicine — medical care delivered online — is in the midst of an historic spike, in Maryland and around the U.S., Bruce DePuyt of Maryland Matters reports.

HARRIS IN ARGUMENT WITH WH STAFFER? U.S. Andy Harris is alleged to have gotten into an argument with a White House staffer at the event, using a curse word. It’s not the first time that Harris’ anger has been public, according to Ryan Miner of a Miner Detail blog.

20% OF VOTERS UNDECIDED: More than a fifth of voters surveyed recently were still undecided about who to support in the June 2 Democratic primary, the election expected to determine who will become Baltimore mayor, Luke Broadwater and Talia Richman of the Sun report. Candidates are flooding mailboxes and TV screens with ads, but many traditional ways of winning over voters have been rendered irrelevant by the coronavirus pandemic that has taken more than 200 lives in the city.

SUN ENDORSEMENTS: The The Sun editorial board endorsed Nick Mosby for City Council President and Bill Henry for comptroller.

MO CO SUPER DECLINES $25,000 RAISE: Montgomery County Public Schools Superintendent Jack Smith has declined a $25,000 raise he was to get soon as part of his new employment contract, as county officials face a budget crunch due to the economic fallout of the coronavirus pandemic, Caitlynn Peetz of Bethesda Beat.

DEMS SEEK WAYS TO ENGAGE VOTERS: With the Maryland primary quickly approaching and Democratic leaders casting about for ways to engage voters in the months leading up to the November election, the Maryland Democratic Party and former vice president Joe Biden’s White House campaign have a series of events scheduled for this week that are designed to be building blocks for the general election push, Josh Kurtz reports for Maryland Matters.