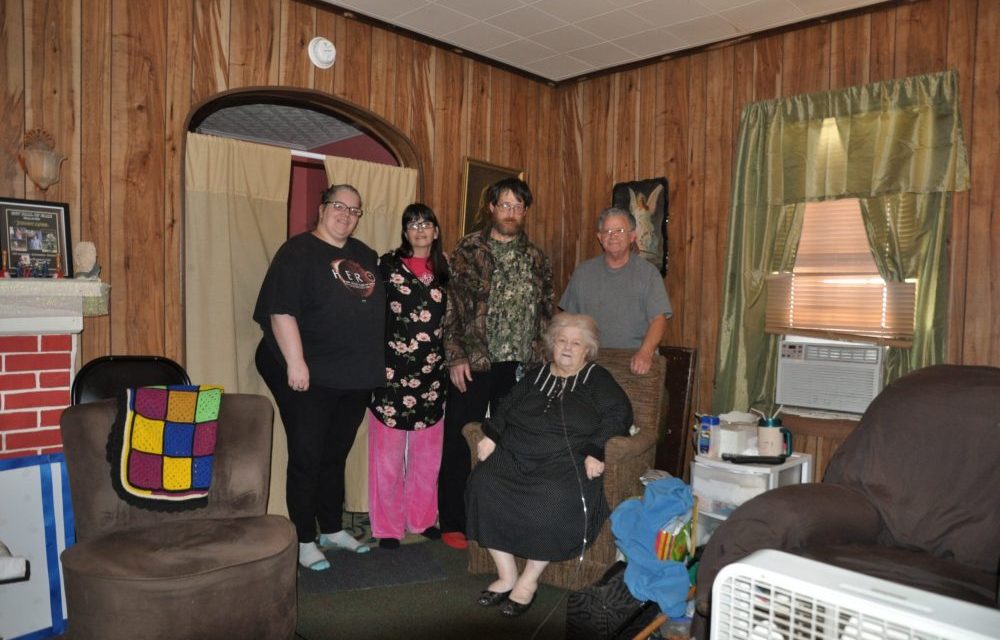 John Peters (gray shirt) and Sheryl Peters (seated), share their house with friends but are worried they will not be able to refinance their mortgage, which is more than their house is worth. (Paige Leckie/Capital News Service)

Listen to this article
By PAIGE LECKIE
SALISBURY, Maryland – Each week, John Peters does yard work for neighbors, shuttles friends to doctors’ appointments and works as a janitor at Crossroads Church of God. The jobs bring in extra money used to keep the family afloat while he and his wife, Sheryl, scramble to find a lender willing to refinance their troubled mortgage.

Both senior citizens in their 70s, the Peterses owe $72,000 on the small powder-blue bungalow that they have owned since 2002. But the house is worth just $48,000, meaning they are “underwater” and owe more on the home than it’s worth.

It’s a situation that has roiled the Peters family ever since John was laid off from his job as a store clerk in 2017 after 44 years of employment. Unable to sell the house or refinance the 10% mortgage rate to a more affordable level, the couple is stuck in a quagmire that shows few signs of being resolved anytime soon.

“We have outstanding debt…that we can’t pay and legal aid is helping us with that and we still may end up having to file bankruptcy,” said Sheryl Peters, who has been house-ridden since a bout of pneumonia last summer.  “We’re just trying to do the best we can.”

More than a decade after the financial crisis upended the housing market, values in most of the nation have bounced back thanks to a strong economy and rising demand.

Nationwide, the percentage of homes that were underwater, also called negative equity, at the end of last year was 3.5%, down sharply from a peak of 26% in the fourth quarter of 2009,  according to CoreLogic, a company based in Irvine, California, that tracks mortgage data.

But it’s a different story here on Maryland’s Eastern Shore as well as several other mostly rural or poor communities across the state.

In Wicomico County, where Salisbury is located, the percentage of underwater mortgages was 9.14% at the end of last year, according to an analysis of CoreLogic data by Capital News Service.

While that’s down from 18% at the height of the financial crisis in 2009, it’s still considerably higher than the national average. It’s also much higher than in some of Maryland’s wealthier counties, where home values now exceed pre-recession levels due to strong demand and high household incomes.

The percentage of underwater mortgages in Howard County, which has one of the highest median household incomes in the United States, was 2.98% at the end of last year.

The coronavirus crisis could push home values even lower in the areas already struggling with underwater mortgages, according to economists, as unemployment rises and puts even more downward pressure on home values.

While many homeowners across the country are likely to see their home values erode, those who are already underwater are especially vulnerable, said Frank Nothaft, CoreLogic’s chief economist. “Given that they have no equity,” he said, “they may fall off the precipice” and into foreclosure.

It’s a part-rural and part-urban county that is best known as the headquarters of Perdue Farms Inc., the giant poultry company. It’s a have-not region with a relatively older population and lower income levels, which means that change happens slower in Wicomico, as it does in many Eastern Shore counties, according to Salisbury University economics professor Memo Diriker.

“We’ve always seen that both good times and bad times nationally manifest themselves here on the shore later and slower,” Diriker said. “This region, especially during the recession and in the long recovery period that followed, has lost a number of jobs.”

Many of the lost jobs were in manufacturing, at companies such as Labinal Power Systems, a unit of Safran Technologies, which closed its Salisbury plant in 2016, laid off 650 workers and moved operations to Texas.

In 2007, boat maker Brunswick Corp. moved production of its Bayliner and Maxum boats out of Salisbury to a plant in North Carolina. The move resulted in the loss of almost 200 jobs in production and other related positions.

Most of the non-farming jobs that remain are either low-wage jobs in retail and services or in healthcare and education, which require higher skills than many long-time local residents possess.

“People either have to take jobs that pay less than they used to, or they have to be completely reeducated or retooled,” Diriker said. “That inevitably leaves some people out of the workforce.”

The sour job market reduces the number of people who can buy homes, which in turn puts downward pressure on prices and hurts existing homeowners.

“Families are stuck. They can’t refinance, they can’t take advantage of the current market rates which are so low, so they’re stuck paying a monthly payment based on an old probably inflated home value,” said Leah Dyson, a former housing adviser at Salisbury Neighborhood Housing Services, a non-profit affiliated with NeighborWorks America, an organization that assists families on housing-related issues and community development.

“Our families that are underwater are ten times more likely to fall behind on their mortgage, so it’s just a problem that keeps on snowballing,” she said.

Dyson has worked closely with the Peterses and their mortgage servicing company, Fay Servicing LLC, to try to modify the terms of the mortgage or refinance and lower the couple’s high-interest rate. So far, negotiations have been unsuccessful.

Members of the Salisbury community since the mid-1960s, the Peterses have owned their home since 2002, when Sheryl’s mother died and passed the home to her free of debt.

At some point the loan was converted to a mortgage and the couple fell behind on the payments, which caused fees to accumulate and the principal to grow. According to Sheryl Peters, the mortgage is no longer past due.

As their mortgage grew, home values in their community dropped. When older homeowners began to pass away or move to senior-housing, some homes in the Peterses’ neighborhood were purchased by investors and turned into rental properties, according to Sheryl.

What was once a middle-class neighborhood turned “transient,” with college students and others moving into the rentals. “The properties were not kept up like homeowners would keep up their own properties, so the values went down” Sheryl said.

The Peters couple’s two-bedroom house was also home to their only son, who died last year from complications of hypertension, and his finance, who remains in the house.

The couple has also taken in a young unemployed couple, James Morrow and Karen Oplinger, who helped care for their son in exchange for housing. The couple pays rent to live in the Peterses’ front room and help with household chores.

“I used to call this the Harbor House because everybody came to our house,” said Sheryl.

For the Peterses, the shifting job market had a devastating impact on their financial well-being.

In 2009, Sheryl was laid off as an office manager at Maple Shade Youth and Family Services. She filed for unemployment and tried to find more work, but few were willing to hire a then-62-year-old, she said.

Then in 2017, John was let go from Keen Compressed Gas (formerly Keen Welding Supply), where he had been working for more than 40 years.

It’s not clear why Fay Servicing declined to modify the Peters mortgage.

After collecting the couple’s financial information and reviewing the facts of the situation, Dyson and the Salisbury NHS put together a loan modification application, which was sent to Fay Servicing. But the company, according to Dyson, was unwilling to consider changing the terms of the mortgage.

“There was a lot of room for (the Peterses) to receive assistance,” Dyson said, “and the company refused to do anything.” Fay Servicing declined to comment.

Guy Cecala, the publisher of Inside Mortgage Finance, said this issue isn’t uncommon with mortgages handled by Fay Servicing, which is a so-called special servicer that handles high-risk mortgages.

Borrowers dealing with special servicers generally have less power than they would with other servicers when requesting a modified mortgage, he said.

“With a special servicer (like Fay Servicing), they get more money if they can reclaim the property for an investor than they do in a loan modification,” Cecala said. “That’s the bad news for borrowers in this case.”

But Fay Chief Marketing Officer Mike Wojcik said his company doesn’t seek foreclosure because such a move is time-consuming and costly.

“There are no winners when a default results in foreclosure,” he said, adding that 70% of Fay’s customers have received or are currently receiving assistance with their mortgages.

Unfortunately, the Peterses are not in that group. Unable to modify their mortgage, the family remains underwater with seemingly no options and at the mercy of the economy.

“I just have to be able to have the low enough payment,” Sheryl said, “so that we can at least go to the grocery store and not have to wonder, you know, are we going to buy the tuna fish or are we going to get the toilet paper?”

Now, the couple is left to conquer life one day at a time, making ends barely meet and relying on those they previously assisted to come to their aid.

Japan recognizes new ties to Maryland — and drivers licenses too

Coalition backs tax hikes for roads, transit, along with a “lockbox” to protect the money