Gansler: Trump doesn’t have the authority to order states to reopen their economies 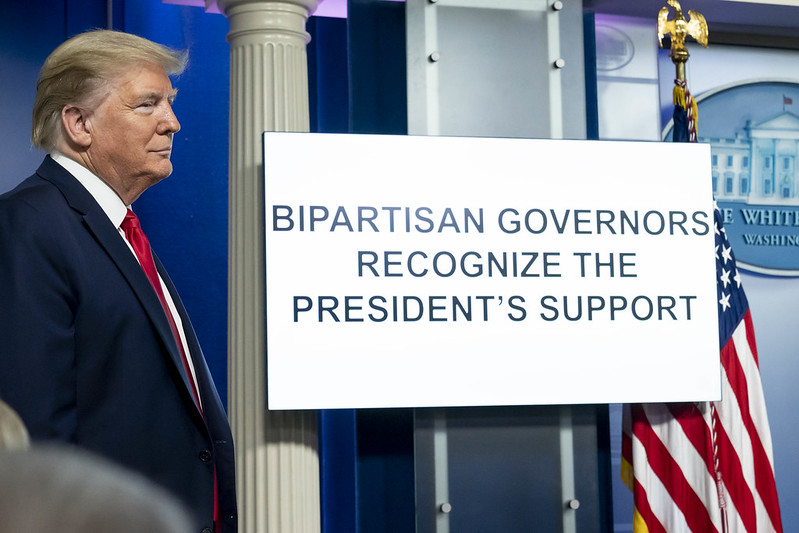 At the Coronavirus Task Force briefing at the White House on Monday, President Donald Trump said had been very helpful to governors during the Covid-19 response and said he -- not the governors -- will decide when the states reopen their economies. (White House photo)

Former Maryland Attorney General Doug Gansler poured cold water on President Donald Trump’s recent suggestion that he alone has the power to decide when state economies shuttered by restrictions aimed at preventing the spread of the coronavirus will reopen.

“There is absolutely no authority whatsoever to suggest that the president has total power in our country. That is why the Federalist Papers were written. That is why the Constitution was written,” Gansler told MarylandReporter.com in a phone interview on Tuesday.

“There is no question about that. And, so, in practical terms here — given that there is no argument in his favor to suggest that he is, in fact, a dictator or a king, and that we do have the Constitution of the United States — the states themselves took the initiative individually, independently and sequentially over time to decide to close down their states. They will also do the same thing in terms of when to reopen their states and how to do so…The president does not have that power.” 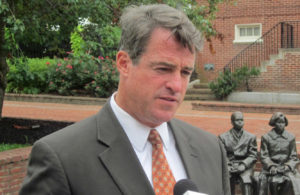 “That has nothing to do with this. The Constitution itself does not give the president ultimate power and unfettered and unqualified power. That’s a different thing.

“So, the supremacy clause would only kick in if there were two different laws. The opening and shutting down of the government and the economy is not a law. It is a policy decision.”

But Gansler said he does not think Trump would actually issue such an order.

Former federal prosecutor Steven H. Levin, like Gansler, said Trump does not have the authority to force states to reopen for business.

“As every governor will tell you, that is a decision made by the executive of each state. And certainly he is entitled to discuss the issue with them and make recommendations. But he alone is not in a position to order states to reopen churches, reopen businesses, reopen health fitness clubs — and he is ignoring the Constitution when he says otherwise.”

Trump made his assertion in response to a question at a White House press briefing on Monday evening. “When somebody is president of the United States, your authority is total,” he said. “The governors know that.”

….It is the decision of the President, and for many good reasons. With that being said, the Administration and I are working closely with the Governors, and this will continue. A decision by me, in conjunction with the Governors and input from others, will be made shortly!

Gov. Larry Hogan is one of several state chief executives who voiced disagreement with the president. Hogan, who is chair of the National Governors Association, said of Trump’s claim in an interview with CNN’s Anderson Cooper on Monday afternoon: “Well, it’s not my understanding of the Constitution.”

Hogan elaborated on that point later in the interview.

“Governors made decisions to take various actions in their states based on what they thought was right for their state, based on the facts on the ground, talking with doctors and scientists. And I think individual governors who made those decisions will have the ultimate decision about what to do with their states.”

New York Gov. Andrew Cuomo said during his daily news briefing on Tuesday morning that the  president is “”clearly spoiling for a fight on this issue.”

Cuomo acknowledged that Trump had been responsive to the governor’s request for more equipment and supplies, and he stressed that everyone needs to work together. But when it comes to deciding when the economy will reopen, Cuomo said, “I will not engage him. … If he wants a fight, he’s not going to get it from me.”

Cuomo said that since the governors are the ones who closed down the states, they will be the ones who decide when to reopen them.

Cuomo and the governors of New Jersey, Connecticut, Rhode Island, Massachusetts, Delaware and Pennsylvania announced on Monday that they have formed a council aimed at coming up with a plan to gradually reopen their states’ economies. The council will include health and economic experts from each of the states.

There are 9,472 confirmed cases of the virus in Maryland as Tuesday morning, according to the state’s Department of Health, while 302 people in Maryland have died from the virus.