LIMITED IN-PERSON VOTING OK’d: With 15 days remaining until the special general election for the 7th Congressional District, the Maryland Board of Elections of reversed itself yet again Monday, clearing the way for limited in-person voting on April 28 in spite of the coronavirus outbreak, Emily Opilo of the Sun reports.

COURT MOVES TO PROTECT YOUNG OFFENDERS: The state’s highest court took sweeping actions late Monday to protect juveniles already behind bars and to keep more youth from being detained unless absolutely necessary, the state justice system’s strongest response yet to the growing threat of the coronavirus, by McKenna Oxenden and Phillip Jackson report in the Sun. 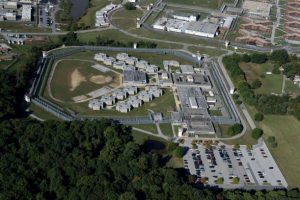 FIRST MD INMATE DIES OF COVID-19: A man in his 60s became the first inmate to die in the Maryland prison system as the total number of prisoners and staff to contract the coronavirus neared 100, Phillip Jackson of the Sun writes.

HOGAN PUSHES PENCE FOR AID TO STATES: Gov. Larry Hogan took his argument for $500 billion in aid for state governments to the White House on Monday, making a pitch to Vice President Mike Pence during a conference call, Pamela Wood of the Sun reports. Hogan, head of the National Governors Association, said in a statement afterward: “The COVID-19 response is resulting in catastrophic damage to state economies.”

HOGAN SAYS STATES WILL DECIDE ON REOPENING: Gov. Hogan pushed back on President Donald Trump’s suggestion that it was Trump’s decision alone about when states will reopen for business, saying that governors made the decisions to take action in their states and they will be the ones to make the ultimate decision on when to reopen sectors within their borders, Danielle Gaines writes in Maryland Matters.

MD COLLEGES, STUDENTS TO GET $170M IN FED AID: Maryland colleges and universities are set to receive more than $170 million as part of a federal relief package aimed at helping schools and students struggling during the coronavirus pandemic, Jessica Iannetta of the Baltimore Business Journal reports. Fifty percent will be set aside to assist students facing emergency expenses.

SMALL BIZ FARING OK: Maryland ranks near the bottom among states whose small businesses are most affected by the coronavirus, according to a study released on Monday. The WalletHub study found that Maryland ranked 40th among 51 jurisdictions in terms of small businesses most affected due to the virus. Hawaii ranked first and the District of Columbia ranked last, writes Bryan Renbaum of MarylandReporter.

NEW TYPES OF OPEN MEETINGS ON THE FLY: A spot-check of a dozen recent council and commission meetings across the state found elected leaders and government attorneys adopting new policies — and explaining changes in procedures to their viewer-constituents — on the fly, writes Bruce DePuyt for Maryland Matters.

CARROLL LOGS 30th DEATH: One month since the first case of coronavirus was announced in Carroll County, there have been 30 deaths out of 250 confirmed cases according to data released by the Carroll County Health Department late Monday afternoon, Mary Grace Keller of the Carroll County Times reports.

MOST NEW HARFORD CASES IN CENTRAL COUNTY: Most of Harford County’s 142 confirmed cases of the new coronavirus reported Monday have been concentrated in the central part of the county, according to ZIP code data released by the state this week, the Aegis is reporting.

IN FREDERICK, RESIDENTS OUT OF ISOLATION: For the first time, more Frederick County residents were released from isolation than new cases of COVID-19 were reported, Heather Mongilio of the Frederick News-Post reports.

B’MORE COUNCIL PUSHES FOR MASKS AND MOTELS: The Baltimore City Council pressed the mayor on Monday to require all residents to wear a face covering when they go out in public to help limit the spread of the coronavirus, reports Talia Richman of the Sun.

ARUNDEL COUNCIL HOLDS EMERGENCY SESSION: The Anne Arundel County Council will meet virtually at 9 a.m. Tuesday in an emergency session to introduce legislation that will create a mechanism to handle federal coronavirus funds, Olivia Sanchez of the Capital Gazette reports.

OPINION: PRIVACY VS. RIGHT TO KNOW: In a column for the Cumberland Times-News, Teresa McMinn asks if the names and locations of nursing homes infected by COVID-19 should be made public. Some folks answer “no,” while others believe the information is vital to track the spread of the virus.

FICKER RUNNING FOR GOVERNOR: Brian Griffiths notes in Red Maryland that it looks like Republican activist and perennial candidate Robin Ficker is running for governor, if the one sign in Western Maryland and an uninformative website are indications. Griffiths says Ficker, an attorney who served as a state delegate from 1979 to 1983, “will start this race as a major underdog.”