In a floor speech on Friday, Maryland Senate President Bill Ferguson lamented the new changes the states is undergoing in response to the global outbreak of the coronavirus. He stressed that lawmakers will continue their work and that every precaution will be taken to keep both staff and members of the public safe.

“Today kids are in school. On Monday they won’t be. Today families and individuals across the state of Maryland are going to work. So is the Maryland Senate.

“The objective here is to bend the curve on contamination. The single best thing that each and every one of us can do is lower our own risk and lower the risk of spreading a contagion.

Ferguson said he is confident the state will get through the current crisis.

“We do have a job down here to get done. Our caucus has been meeting this morning — talking about priorities to get things done for the benefit of this state and the citizens —to get us through to the other side. We’ve seen these pandemics over the last century…and we do as you say —get out on the right side of this — and that’s where we’re gonna be.” 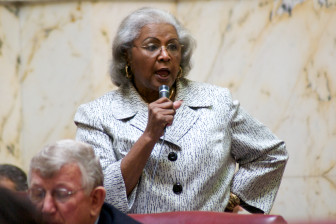 Sen. Joanne Benson (D-Prince George’s) expressed concern that the capitol complex’s janitorial workers and police officers have been left out of the loop. Benson said members of both groups have approached her and said they are not sure what their added responsibilities are under the new rules and restrictions. Benson asked Ferguson to help.

“I would ask that you all include those …. workers in the mix so they will know what they are supposed to be doing. They are some of the finest people that you could ever meet…and I am concerned” about them, she said.

Ferguson said the matter will be taken care of.

“We are going to make sure that we are absolutely in contact with them.”

On Thursday evening, Ferguson and House Speaker Adrienne Jones (D) announced new rules that restrict access to the State House as well as the House and Senate office complexes. The rules limit entry to those who possess a state-issued identification badge such as lawmakers, their staff, other state employees and credentialed members of the media. The move temporarily curtails public access to the legislative buildings. That means members of the public cannot come to Annapolis to testify on bills, although they can submit their testimony in writing.

There are three weeks left in the legislative session. Ferguson and Jones said lawmakers will work through the weekend on priority legislation just in case a decision is made to end the session early. They stressed that the restrictions are not permanent. By law, the General Assembly must approve a budget by March 30. Ferguson said Friday that currently there are no plans to end the session early although he did not rule out the possibility.

At a news conference on Thursday afternoon with Gov. Larry Hogan, State Superintendent of Schools Karen Salmon announced that as of Monday the state’s public schools will be closed for two weeks. Hogan has signed executive orders that activate the state’s national guard, close the cruise terminal at the Port of Baltimore and prohibit mass gatherings of more than 250 people. Last week Hogan declared a state of emergency in response to the virus.

As of Friday afternoon, there are now 17 confirmed cases of the virus in Maryland — a 42% increase from the state’s tally of 12 on Thursday.

Miller announces his retirement from the Senate