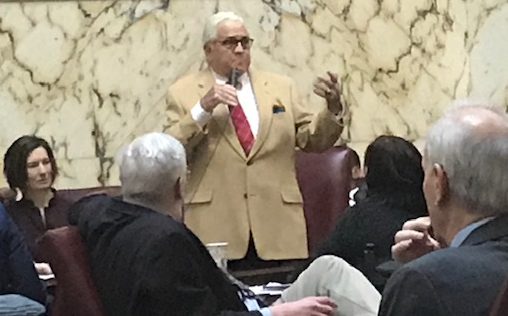 On his first full day as a common legislator, Sen. Mike Miller, D-Calvert, emphasized the need to address violent crime in Baltimore City and in the process touched off a conversation that attracted bipartisan enthusiasm.

“We’re sitting here while Rome is burning,” Miller said in a speech on the Senate floor on Thursday.

The governor has put forth this plan. I don’t know if it’s a good plan or not –assign 25 assistant attorney generals to the city or what have you – – but this is a problem we need to address. We really need to address it. And honestly and truly it’s crying out for help.”

Miller said helping Baltimore should be a key focus of the legislative session. The city reported a record-breaking number of homicides (348) and a clearance rate of less than 40%.

“If there’s anything we can do on the second day of a 90-day session — we’re only here for three months — we need to address it. We really need to focus on it.”

Miller said the impetus for his speech came from recent comments former deputy attorney general Rod Rosenstein tweeted about how the murder rate in Baltimore drastically declined during his 12-year tenure (2005-17) as U.S. Attorney for the District of Maryland. Rosenstein attributed the decline in the murders to cooperation by city prosecutors with state officials and the Justice Department. Rosenstein posted the tweet on Jan. 1. He did an interview with the Baltimore Sun on Wednesday in which he discussed the issue further.

Miller said he agreed with the spirit of Rosenstein’s remarks.

“Mr. Rosenstein was right on the mark… He was able to do it and we’re able to do it too if we work with the governor and make things happen.”

Sen. Antonio Hayes, D-Baltimore, who is chair of the city’s Senate delegation, asked his colleagues to work together to help the city.

“We recognize that we have some challenges in the city. We encourage each and every one of you to reach out to the members of the Baltimore City Senate delegation if you are interested in helping our city.”

He added: “Last year there were a lot of comments as it relates to the city, a lot of them from folks outside of the city. We encourage … that you leave the subject matter to experts that live and transport every day to the city of Baltimore.”

Sen. Johnny Salling, R-Baltimore County, said many of the problems present in Baltimore City have crossed over into the county.

“We do have major problems and we need to work together because we see the problems in Baltimore County that we’re having there now.”

“We need to find good measures so that we can really rescue this problem. It really comes down to ‘what are we?’ And I think putting our heads together we have the knowledge here and we have the people here…to make the right decisions.”

Last month the Hogan administration unveiled a series of legislative proposals aimed at reducing violent crime. They include $21 million in additional funding for Baltimore City prosecutors and funds for the state attorney general’s office to hire 25 new prosecutors and personnel to assist in prosecution. Hogan claimed overwhelming popular support for the proposals at a news conference at the State House on Tuesday.

The office of Baltimore Mayor Jack Young has not responded to multiple requests by MarylandReporter.com for comment about Hogan’s claim that more than 90 percent of Baltimore City residents support the proposals.

Miller served as senate president from Jan. 21, 1987 until Wednesday afternoon, when Sen. Bill Ferguson D-Baltimore City, was sworn-in as his successor.