The good news, according to the results of the 2018 aerial survey, is that underwater grass acreage increased overall from 2017 in areas where the survey was completed.

But the full story is far from clear. Most of that survey was finished before unrelenting rains began in late July. The continual downpours flushed huge amounts of water-clouding sediment and nutrients into the Bay, which can be lethal to grass beds.

Scientists say grasses stressed by poor conditions last year may not bounce back this summer. As a result, the impact of those high river flows may not be known until after the 2019 survey is complete.

“Everyone is wondering what will happen in 2019 and how these plants will react,” said Bob Orth, the Virginia Institute of Marine Science researcher who has been overseeing the aerial survey since its inception in 1984.

The survey is normally conducted by airplane, but poor weather conditions and flight restrictions around military bases made it impossible to fly much of last summer and fall. Still, satellite images and anecdotal information from last fall and this spring suggest that, while loss occurred, plants persisted in some hard-hit areas. Based on this, Orth characterized his outlook for underwater grass beds as “guarded.”

Grasses are considered one of the most important indictors of Bay health because they require clear water to survive. They are important habitat for waterfowl (ducks and such), juvenile blue crabs and many types of fish. They are also a critical component of the ecosystem in their own right, pumping oxygen into the water, trapping sediment and buffering shorelines from the erosive impact of waves.

Observations of grass beds made late last year showed cause for both concern and optimism. Portions of the Upper Bay, mostly in Maryland, showed evidence of diebacks, yet satellite images showed that the large underwater meadow at Susquehanna flats, near the mouth of the Bay’s largest tributary, survived.

“The flats were turbid for months, and yet that bed persisted over time,” Orth said.

Scientists caution that plants may have tapped into their energy reserves to survive poor conditions last year, which could cause additional losses this year.

“This summer will be the real test to see the impact of last summer’s high flows,” said Brooke Landry, a biologist with the Maryland Department of Natural Resources and chair of the state-federal Bay Program’s Submerged Aquatic Vegetation Workgroup.

But underwater grasses appear to have avoided a catastrophic setback. Landry said many beds in the Bay may have become robust enough to tolerate longer periods of poor water quality.

“It’s resilience at work,” Landry said. “We had gotten to a point where we had a lot of nice, dense grass beds, and we put them through the wringer last year. I think we’ll see some loss this summer, but it appears as though we have gotten them to some point of resilience where they do withstand more stress.”

Overall, last year’s survey looked at 78% of the Chesapeake and found 91,559 acres of underwater grasses. That represented a roughly 5% increase over the previous year for that area.

Had the survey been completed before conditions turned bad, scientists say it likely would have revealed a record year for underwater grasses — possibly more than 108,000 acres, surpassing the record-setting 104,843 acres observed in 2017.

“I think we would have been well on our way to surpassing the 2017 levels if the last year hadn’t turned into such a muddy mess,” Landry said.

The regional restoration goal for Bay grasses is 185,000 acres.

Bay grasses have been steadily recovering since Hurricane Irene and Tropical Storm Lee struck in late summer 2011, knocking them back to 48,195 acres in the 2012 survey. 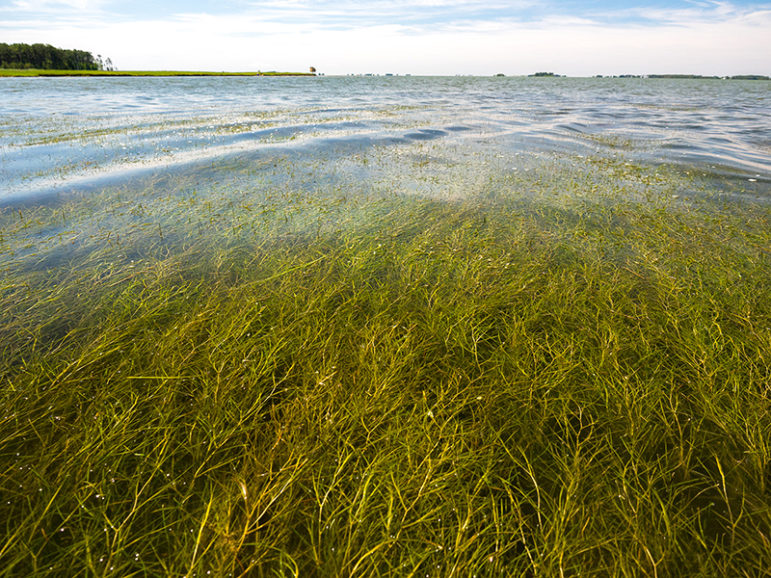 Widgeon grass floats on the surface at low tide on the Honga River. Hoopers Island is in the background. Bay Journal photo by Dave Harp

The strongest increases last year were in the mid– and high-salinity regions of the Bay. Most were due to the expansion of widgeon grass, which showed up in areas where it had never been previously reported.

“Bay wide, the story is still really the huge expansion we’ve had in widgeon grass,” said Dave Wilcox, a VIMS scientist who works on the annual survey. “That’s what is driving our numbers in the last several years.”

But widgeon grass is notorious for being a boom-and-bust species that can quickly disappear when water quality declines. Biologists said that early signs of its reaction to last year’s flows have been mixed. Beds have persisted but shrunk in some areas, and in other places they were gone, Orth said.

“That is really good news,” she said. “In areas where there may have been a little horned pondweed here and there in earlier years, there’s a lot of it out there now.”

And citizens monitoring grasses as part of the recently created Chesapeake Bay SAV Watchers program have reported robust beds in areas such as the Severn River in Maryland.

The fate of eelgrass crucial

A major concern, though, involves the fate of eelgrass, the dominant underwater grass found in high-salinity areas toward the southern end of the Bay. Last year’s survey found robust beds there, but then hot temperatures — possibly compounded by an influx of low-salinity water — caused the mass defoliation in late fall. If that happens again, it could leave large areas of the lower Bay, where beds are especially important for juvenile crabs, denuded of vegetation.

Eelgrass has rootlike structures called rhizomes, which produce new shoots that spread over the bottom. If the plant is killed in late summer, when water temperatures are at their warmest, the rhizomes die, too.

Before they died late last year, though, the plants produced a robust amount of seeds that have sprouted in many areas this spring, helping to maintain the beds. But this year’s seedlings will not produce seeds of their own until next year. Therefore, if a plant-killing hot spell hits for a second year in a row, neither the seeds nor the rhizomes would be available to spur a comeback.

“If we had another bad year, we would have no seeds, and we would have a total loss of eelgrass in many of these areas,” Orth said.

Eelgrass can tolerate somewhat higher temperatures if it has clear water, which causes less stress to the plants. But continued high flows early this year have clouded the water in many beds, Orth said. “If the clarity doesn’t improve, this could be a bad year for eelgrass.” 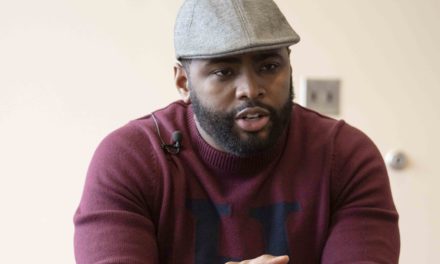