“Maryland’s problem of being an unfriendly state for business is a state problem,” Wit told an MBRG gathering. “We need the state to take charge of this,” and bring everyone to the table, business, nonprofits and state officials.

The Greater Baltimore Committee announced two weeks ago it was going to create an independent private-sector commission “to study Maryland’s tax structure and fiscal appropriations and make recommendations to achieve a more competitive tax structure and improved state spending efficiency.”

But Wit said he did not just want to see another study that the state could put on a shelf. Instead, he asked for a commission that had the full involvement of state officials.

“We would like Maryland to take the lead in fixing it,” he said.

Changing the perception of MBRG

As the new chair, taking over from co-chairs Republican Ellen Sauerbrey and former Democratic Gov. Marvin Mandel, Wit recognized that he also needed to change the perception of MBRG.

When he was nominated for the post, his wife told him that he needed to change the name of the group from Maryland Business for “Republican” Government.

“I think a nonpolitical business person can move the needle,” Wit said.

Wit’s boss, Edward St. John through the company and separate LLC corporations it establishes for each of its buildings, has been a major political donor to members of both parties throughout Maryland.

Former Anne Arundel County Executive Janet Owens, a Democrat who attended the event, said, “Anyone who thinks the concern about the economy is only a Republican issue is out to lunch.”

She once brought Wit to New York with her to meet with the bond rating firms and talk about economic success in Anne Arundel. Wit, Owens said, is “stable, moderate, centrist, knowledgeable and fair.”

Besides the business executives, the event at Arundel Preserve Hotel was attended by several Democratic legislators, including Senate President Mike Miller and Sen. James Ed DeGrange, who represents the district and gets some of the top grades in MBRG’s annual Roll Call report.  DeGrange has a cumulative score of 71%, tops among Senate Democrats, and Miller’s cumulative is 56%.

Attorney Carville Collins, who heads the committee that selects the votes for the report card, said any legislator who gets 70% “deserves our support.”

But any business which contributes to a lawmaker with a low score, “you’re effectively supporting someone who’s voting against you,” Collins said. 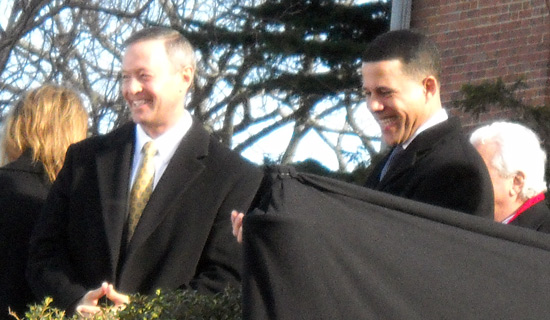 O’Malley’s “luck of the Irish” brings sun for inauguration