HOGAN CRITICIZES TRUMP, SLAMS RNC: Speaking to an influential crowd of about 100 business and political leaders in New Hampshire, Hogan said a “growing” number of Republicans are urging him to launch a primary challenge to the president — and he plans to visit 16 states while gauging interest in his potential candidacy, Luke Broadwater of the Sun reports.

ANALYSIS: HOGAN MASTERING DETAILS: In an analysis of Gov. Hogan’s Saint Anselm speech and the current political climate, Bruce DePuyt of Maryland Matters writes that “Hogan displayed the mastery of details that a man contemplating a run for president in 2020 would need to have at his fingertips — the political standing of the current occupant of the Oval Office, the mood of the electorate, and candidate filing deadlines in important states like New Hampshire, home to the nation’s first presidential primary. He also made conspicuous note of the number of states — 23, by his count— that have open primaries.”

GOP DELEGATES SEEK LEVERAGE OVER SPEAKER PICK: Outnumbered more than 2-1 in the House of Delegates, Maryland’s Republican delegates could leverage a divided Democratic Party to help push one candidate for Speaker of the House to replace the late Speaker Michael Busch, Danielle Gaines reports in Maryland Matters. Todd Eberly, a political science professor at St. Mary’s College of Maryland, said that, “It’s obvious there’s a speaker they’d be unhappy with and a speaker they’d be less unhappy with.”

PROGRESSIVE GROUPS URGE DEMS TO UNIFY OVER SPEAKER: A coalition of progressive groups is preparing to urge the 98 Democratic members of the House of Delegates to commit to voting for the selection of the Democratic caucus when the full House convenes next week to choose a replacement for the late Speaker Michael E. Busch (D), who died on April 7, Josh Kurtz reports for Maryland Matters. Whether it’s delivered overtly or implicitly, that request is expected to be accompanied by a warning that the Democratic lawmakers could suffer political consequences if they vote for a candidate for speaker of the House next week who enjoys substantial support from Republicans.

STATE OF THE STATE HOUSE PRESS CORPS: Len Lazarick of MarylandReporter writes about the importance and quality of State House in Maryland and bemoans the lack of Annapolis news coverage in the state’s two largest jurisdictions in Montgomery and Prince George’s counties.

PLANNED PARENTHOOD GOES ON OFFENSIVE: It’s time for states with leaders who support abortion rights to go on the offensive against Trump administration attempts to restrict abortion that would reduce access to health care, Dr. Leana Wen, the president of Planned Parenthood said Tuesday. Wen cited Maryland as a leader among states opposing the Trump plans. Earlier this month, Maryland became the first state to pass a measure that would end participation in the program if the rule takes effect, Brian Witte of the Associated Press reports.

YOUNG WANTS PUGH OUT: Ian Duncan of the Sun writes that acting Baltimore Mayor Jack Young said Tuesday he is frustrated he doesn’t know more about Mayor Catherine Pugh’s plans to return from a leave of absence — and when asked what it would look like if Pugh returned to her duties, he said, “I would hate to see it.”

FREDERICK EYES FARM PRESERVATION: Frederick County has preserved nearly 65,000 acres of farmland, but it’s just land unless there’s a profitable farm on it. Samantha Hogan of the Frederick News-Post reports that it has become a priority of County Executive Jan Gardner to ensure there is — and continues to be — an agricultural industry in Frederick County that can productively use the farmland preserved through state and county programs. She gathered producers of all sizes Monday at Winchester Hall to hear the challenges they face to stay in business. 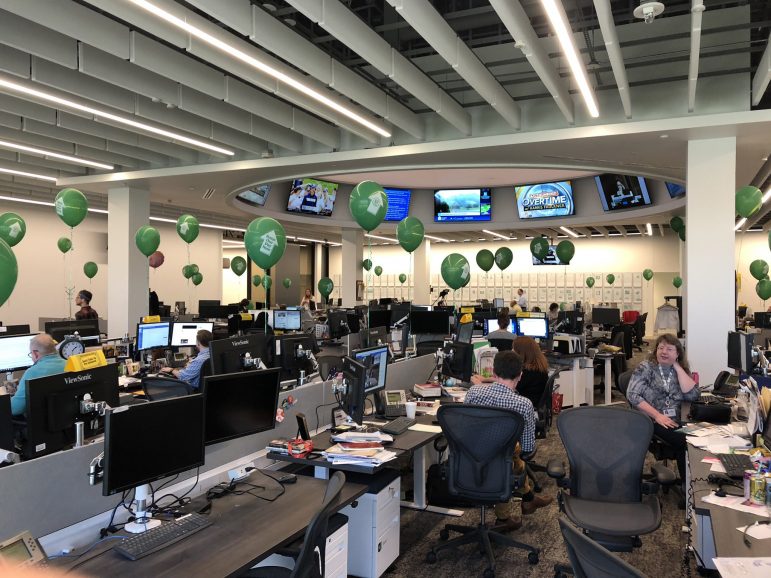 SUN REPORTERS SEEK PAY RAISE: Brandon Weigel of Baltimore Fishbowl reports that as the Sun‘s newsroom heads toward negotiations with management over a new contract, staffers went on social media today to highlight one of their top priorities: pay raises. Reporters posted pictures holding the green balloons with an upward-pointing arrow and the words “Rai$e Our Pay Now.” In a couple of photos, the balloons appeared to be tied to nearly every desk in the paper’s Port Covington newsroom.