Developer James Rouse is on screen from a 1987 interview in a new documentary on "Columbia's Promise" that had a preview screening Wednesday night at Howard Community College's Smith Theater. MarylandReporter.com photo.

The planning of new town Columbia, Md., is an old story made fresh with a new hour-long documentary called “Columbia’s Promise” from Maryland Public Television that airs Sunday at 7 p.m. and is now available online throughout May if not longer. 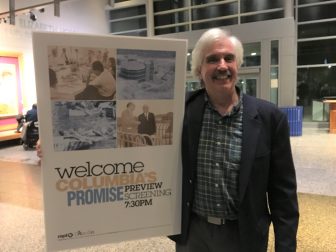 Executive producer Ken Day has been working on the documentary for nearly a year. Even for old timers like myself, who spent 12 months researching my Columbia at 50 book, it visually captures the founding spirit of the planned community and covers new ground.

Most remarkable is Day’s discovery of a 1966 educational TV film on the Columbia planners. It is particularly revealing to hear and see key planners talk about the town of now 100,000 people before the bulldozers began transforming 14,000 acres of Howard County farmland. Even researchers like Rouse biographer Josh Olsen and myself had never seen this rare footage before.

My hour-long taping in the home office where I’m writing this got cut to a 60-second snippet where I make a key point about developer James Rouse’s mission to overcome the legal racial segregation in Baltimore.

Another key to this gem-packed documentary is the 1987 video interview of Rouse by Columbia chronicler Scott Kramer — where he got the visionary capitalist to recount stories of Columbia’s planning from 20-plus years before.

At a preview showing Wednesday night at Howard Community College, which is also featured in the show, a crowd of several hundred gave the documentary a warm reception.

A piece by Janene Holzberg in the Baltimore Sun has more background and reactions on the documentary.