THE RACE FOR SPEAKER: Prince George’s County Executive Angela D. Alsobrooks said Friday she is supporting Del. Dereck Davis to be the next speaker of Maryland’s House of Delegates after the death of long-serving Speaker Michael Busch, Luke Broadwater of the Sun reports. Del. Adrienne A. Jones, 64, a Baltimore County Democrat who ran the Maryland House of Delegates floor sessions during Busch’s illness, Davis, 51,and Del. Maggie McIntosh, 71, of Baltimore, are considered to be among three front-runners for the office.

ZIRKIN TARGET OF CRITICISM: The chairman of a Senate committee is the target of post-General Assembly session criticism by gun control advocates angry with him after a priority bill died on the last day of legislative business, Bryan Sears reports in the Daily Record. Sen. Bobby Zirkin, D-Baltimore County and chairman of the Senate Judicial Proceedings Committee, is getting the blame for the failure of a bill that would have required background checks on private sales of rifles and shotguns. His chief accuser is the widow of John McNamara, a journalist slain in the attack on the The Capital Gazette newspaper in Annapolis.

CHILD MARRIAGE: The question of whether teens should get married primarily has been a battle among adults. Last Monday marked the fourth year Del. Vanessa Atterbeary has tried — and failed — to raise the minimum marriage age in Maryland, Selene San Felice writes in the Annapolis Capital. The Capital talked to two women who married as teens to see how it affected them.

BILL TARGETS CHILD EROTICA: Pictures and videos of children posed provocatively, with cameras focused on private areas, are considered child erotica and not prosecutable under the state’s current child pornography law because they do not depict a sex act. That could all change. The General Assembly voted unanimously to add “lascivious exhibition,” or exposure of the pubic area of any person, to the state’s child pornography statute, Danielle Gaines reports in Maryland Matters.

OP-ED: MARYLAND SHOULD LOOK TO MICHIGAN: In an op-ed for the Post James Hohman of the Mackinac Center and Carol Park of the Maryland Public Policy Institute urges Maryland to look to Michigan when it comes to fixing the pension problem writing that Maryland faces a looming public pension crisis. Maryland has promised government employees and retirees $21 billion more than lawmakers have saved. For Maryland to avoid Detroit’s fate, Maryland can follow Michigan’s lead in strengthening its workers’ pensions.

OP-ED: HOGAN TRAFFIC PLAN SHOULD BE SUPPORTED: In an op-ed for the Post, Jason Stanford, of the Northern Virginia Transportation Alliance. Rick Weldon,of the Frederick County Chamber of Commerce and Margaret Jeffers of the Apartment and Office Building Association of Metropolitan Washington opine that Gov. Larry Hogan’s (R) Traffic Relief Plan represents a once-in-a-lifetime opportunity to make significant improvements to our transportation network. It is a bold plan that needs the region’s support.

GBC CALLS ON PUGH TO RESIGN: The Greater Baltimore Committee issued a call Friday for Mayor Catherine Pugh to resign, a repudiation of her leadership by the influential group of business and civic leaders who say she no longer has “public trust or moral authority,” Ian Duncan is reporting in the Sun. The group’s board voted unanimously in favor of issuing a statement, concerned about revelations of hundreds of thousands of dollars in deals she struck to sell copies of her “Healthy Holly” children’s books.

OPINIONS: PUGH NEEDS TO GO: The editorial board for the Sun opines that with each insistence from Mayor Catherine Pugh and her advisers that she intends to come back to office when her health allows — despite a unanimous call for her to resign from the City Council and from the city’s House delegation because of the fallout from the Healthy Holly scandal — it becomes clearer that the lack of any means to remove a mayor from office short of a criminal conviction is a problem. But that’s not the only change to the charter council members should explore.

HONORING MICHAEL BUSCH: As Maryland begins to officially honor the late Speaker Michael Busch, the longest serving speaker in Maryland history, opinion makers and others roll out their salutes in the Annapolis Capital, his hometown newspaper.

6,670 PREAKNESS SEATS ELIMINATED: The last remaining historic section of Pimlico Race Course is being shut down a month before the Preakness Stakes after an engineering firm determined that 6,670 seats in the Old Grandstand’s open-air section are “no longer suitable to sustain that level of load bearing weight,” Doug Donovan of the Sun reports.

WOMAN TAPPED TO LEAD BA CO FIRE DEPT: Baltimore County Executive Johnny Olszewski Jr. has named nominees for four top county positions, including the first woman to be nominated as fire chief, Libby Solomon of the Towson Times reports. Joanne Rund, a 32-year employee at the Howard County Department of Fire and Rescue Services, would be the first permanent female fire chief in the county’s history, according to a news release.

METRO FUNDING: Maryland’s U.S. senators are in the process of drafting a transportation bill in Congress that would grant the Washington Metropolitan Area Transit Authority at least $150 million a year for the next decade, Dan Schere of Bethesda Beat reports. 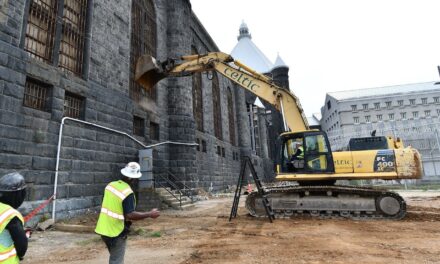