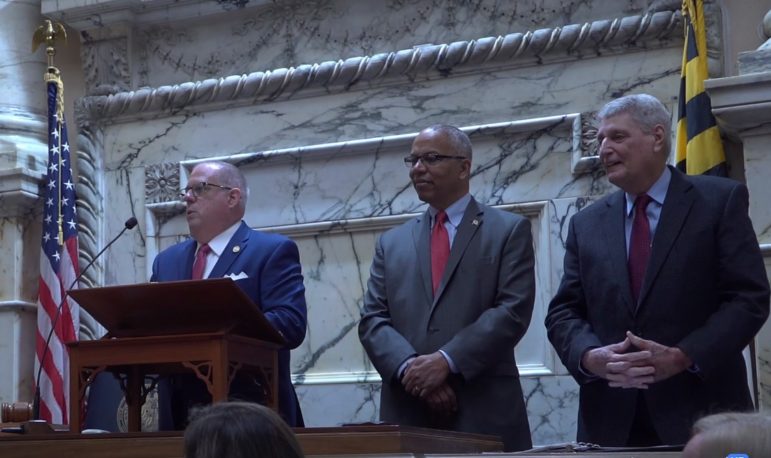 Gov. Larry Hogan welcomes the House of Delegates back to the State House with Lt. Gov. Boyd Rutherford and House Speaker Michael Busch at his side. From the governor’s Facebook video.

CONTENTIOUS SESSION BEGINS: Senate President Mike Miller didn’t mince words Wednesday about what to expect during the 2018 legislative session, Ovetta Wiggins and Josh Hicks report in the Post. With battles brewing over how to respond to federal action on healthcare and taxes, Miller told his colleagues: “This is going to be one of the most contentious sessions you’ll have to ever deal with. . . This tax plan is going to cause us a fit. We’re going to have to find a Maryland solution. . . I ask for all of your help; I ask for God’s help.”

HARASSMENT COMMISSION: Senate President Mike Miller said Wednesday that the General Assembly’s “powerful” new commission to recommend how the legislature should root out sexual harassment in its ranks should be composed only of women to study how other states and countries successfully handle allegations of sexual harassment. Del. Ariana B. Kelly, chair of the women’s legislative caucus, said the legislative leadership has assured her that the caucus will have input, Erin Cox of the Sun reports.

SICK LEAVE VETO OVERRIDE: The House of Delegates could take up the veto override fight on the new paid sick leave law as soon as today, Erin Cox reports in the Sun. Democrats who control the General Assembly have promised to overturn Republican Gov. Larry Hogan’s veto since last year, and scheduled the first vote today to do so.

SET POLITICS ASIDE: Lawmakers opened the 2018 General Assembly session Wednesday asking each other to set aside politics as they tackle several weighty issues during an election year, reports Michael Dresser and Erin Cox of the Sun. “This is going to be a rockin’, rollin’ session,” Speaker Pro Tem Adrienne A. Jones warned the House of Delegates. “So stay tuned, and get plenty of rest.”

EASING HELMET LAW: ABATE of Maryland Inc. members will once again be lobbying for a helmet-modification bill during this year’s General Assembly, Renee Shreve writes for the Garrett County Republican. The proposed legislation would allow a rider who is at least 21 years of age, has taken a motorcycle safety course, and has motorcycle insurance to have the choice of riding with or without a helmet.

HOGAN SUPPORTS PARIS CLIMATE ACCORD: Gov. Larry Hogan (R) joined a group of state and local leaders supporting the Paris climate accord on Wednesday, more than six months after Democrats pressed him to add his name to the list in response to President Trump pulling out of the agreement, Josh Hicks of the Post is reporting. Hogan informed the U.S. Climate Alliance of his decision in a letter, saying his administration “will gladly invest our time and energy with state colleagues for this cause.”

HOGAN’s NEW TUNE ON FORTUNE 500 FIRM LEAVING: When Discovery Communications announced Tuesday that it was moving its corporate headquarters from Silver Spring to New York — reducing the number of Fortune 500 companies based in Maryland from four to three — Gov. Hogan sounded considerably less alarmed than he was on the campaign trail when he blistered his Democratic opponents for what he called onerous regulations, Robert McCartney and Rachel Siegel of the Post report.

FREE COMMUNITY COLLEGE TUITION: A bill to permanently make tuition free for Somerset County students at Wor-Wic Community College is one of the priorities for Lower Shore legislators as they headed back to Annapolis on Wednesday, Liz Holland of the Salisbury Daily Times reports. There also is talk that some members of the Maryland General Assembly favor making tuition free at community colleges statewide, said Del. Charles Otto. “It may gain some traction this year,” he said.

SAVING CHESTERTOWN HOSPITAL: Advocates for the hospital in Chestertown reached out to state officials for direction to help ensure legislation moves forward to preserve inpatient services, writes Dan Divilio for the Easton Star Democrat. The “Save Our Hospital” campaign was formed in late 2015 when doctors learned of the potential for University of Maryland Shore Medical Center at Chestertown to discontinue in-patient care in favor of becoming a free-standing medical facility.

PUGH, HOGAN MEET: Two days after Gov. Larry Hogan promised $2.5 million for repairs to Baltimore City schools’ troubled heating systems, he met with Mayor Catherine Pugh to talk about the schools and other issues.Violence reduction and money for the city’s schools were just two of many items on Pugh’s agenda in her meeting with Hogan, reports Dominique Maria Bonessi for WYPR-FM.

SEN. DeGRANGE LOOKS BACK: John McNamara of the Annapolis Capital writes that when state Sen. Ed DeGrange looks at his colleagues in the Maryland Senate, or at his lifelong home — District 32 — he can’t help but think about all that has changed. DeGrange first won election to the state Senate in 1998, after serving on the Anne Arundel County Council. As he prepared for the 2018 General Assembly session, he figured there were only about 10 current senators who were in place then. By this time next year, he’ll be gone as well, trading legislative battles and budget negotiations for more family time (and golf) at his home in Millersville.

CHANGES TO THE STATE HOUSE LANDSCAPE: The State House in Annapolis enshrines tradition, so the abrupt disappearance of the trees flanking its entrance provided a jarring welcome to lawmakers returning here Wednesday. Freshly cut stumps stood where a dozen trees used to line Lawyers Mall, Erin Cox of the Sun reports. The Department of General Services cut them down in order to repair a leaking steam pipe that was directly beneath them, Gov. Larry Hogan’s spokesman Doug Mayer said.

CANDIDATE ANNOUNCES FOR DEL. PLATT’s SEAT: Del. Andrew Platt of Gaithersburg disclosed Tuesday that he would not seek a second four-year term in Annapolis. That triggered a move by Montgomery County Board of Education member Rebecca Smondrowski to drop a recently announced bid for County Council at-large in favor for Platt’s seat writes Louis Peck for Bethesda Beat.

HOGAN GETS HIGH MARKS: A broadly popular Gov. Larry Hogan enjoys a double-digit lead over three of his prospective Democratic rivals but the Republican still falls short of the 50% mark, a new poll shows. The Gonzales Maryland Poll released Thursday shows that the Republican governor receives high approval ratings from voters across the political spectrum, Michael Dresser writes in the Sun.

ROSS SAYS HE’s RAISED $1M: At least one Democratic gubernatorial candidate crossed the million dollar threshold in money raised for the past year, Josh Kurtz reports in Maryland Matters. Alec Ross, an author and former Hillary Clinton tech adviser, announced via Twitter on Wednesday night that he had raised just over $1 million for his campaign.

TRONE FILES FOR U.S. HOUSE: Businessman David Trone announced Wednesday he is seeking election to the U.S. House of Representatives in Maryland’s 6th District, reports Greg Larry for the Cumberland Times News. Trone, who announced his intention to run for Congress in August, filed his candidacy with the Maryland Board of Elections Wednesday officially placing his name on the ballot.

WA CO COMMISSIONERS WANT INFO REVEALED: Four of the five Washington County commissioners said this week that information from investigations into a former employee’s complaint about sexual harassment and leaks of confidential information should be made public, reports Julie Greene for the Hagertown Herald-Mail. Commissioners President Terry Baker also said he confirmed with the county attorney on Wednesday that it’s up to the commissioners to decide how to move forward with reports from those investigations. 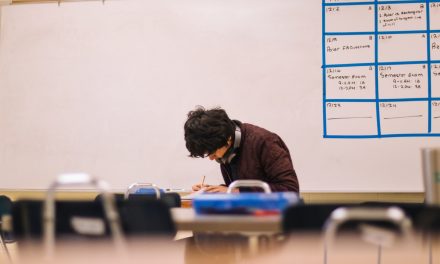