Here is pollster Patrick Gonzales’s analysis of the public opinion survey of 823 registered voters in Maryland his firm finished Jan. 5.

When matched against the top three Democratic contenders, Hogan enjoys a double-digit lead but does not crack the 50% mark against any. Here are the full results of the polling on Gov. Larry Hogan.

Hogan captures nearly 90% of Republicans, a quarter of Democrats, and mid-50s support with unaffiliated voters against the challengers. His geographic base is comprised of Western Maryland and the Eastern Shore (70 percent-range support) and the Baltimore suburbs (mid-to-upper 50s-range support). He trails badly in the Washington suburbs.

In an effort to determine the cause behind Hogan’s drop-off between job approval and stated vote, we dug a little deeper into attitudes among Democrats. Thirty-eight percent of Democrats who “strongly” approve of the job Hogan’s doing as governor either vote for the Democrat or are undecided.

Nearly 90% of Democrats who “somewhat” approve of the job Hogan’s doing are not voting for him. Part of this results from the match-up question being the first time in the survey Hogan is identified by party…part of it is due to the reality that, in today’s political climate, it is difficult for Republican candidates to get Democrats to vote for them.

The key for Hogan in November will be to pick up about 30% of Democrats.

Voters are generally satisfied with things in the state: 59% believe Maryland is moving in the right direction, while 25% feel things are off on the wrong track, and 16% did not provide a response. 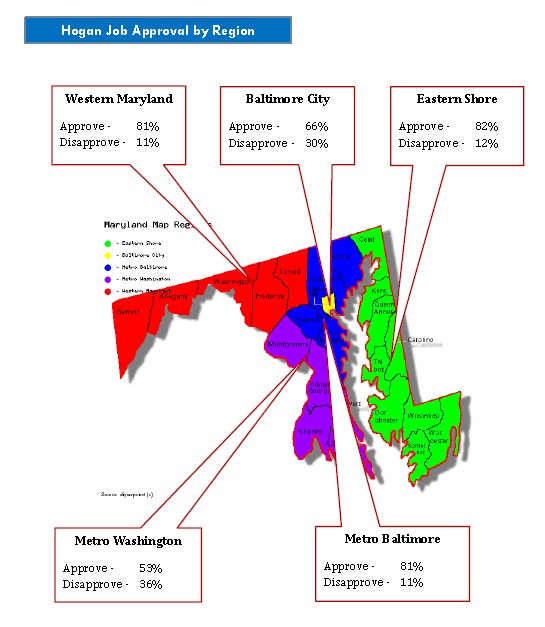 Sixty-eight percent of millennials disapprove of the job Donald Trump is doing as president (58% “strongly” disapprove and 10% “somewhat” disapprove).

Seventy-two percent of GOP voters favor the Tax Bill, while 57% of independents and 75% of Democrats oppose it.

How the poll was done

This poll was conducted by Gonzales Research & Media Services from December 27th, 2017 through January 5th, 2018. A total of 823 registered voters in Maryland, who indicated that they are likely to vote in the November 2018 general election, were queried by live telephone interviews, utilizing both landlines and cell phones. A cross-section of interviews was conducted throughout the state, reflecting general election voting patterns.

As a tantalizing election year begins, and the General Assembly session convenes, the Democratic gubernatorial contest in Maryland starts 2018 as a wide-open affair. The winner six months from now will challenge popular incumbent Larry Hogan in November. Here are the full results of the Democratic primary polling.

Statewide, 24% of likely June primary voters say they’d vote for Rushern Baker “if the election were held today,” 14% say Kevin Kamenetz, 14% say Ben Jealous, 5% back Richard Madaleno, and less than 2% each for Krish Vignarajah, Alec Ross, Jim Shea, and Ralph Jaffe, with 33% undecided. (NOTE: Maya Rockeymoore Cummings, who collected 6% in this survey, ended her campaign this past Friday)

Baker captures 30% the African-American vote, 27% of voters under the age of 55, and 44% of primary voters in Metro Washington, which includes his home base of Prince George’s County, where he enjoys 53% support.

Kamenetz secures 18% of men, 21% of white voters, and 47% in Baltimore County, where he is finishing his second term as county executive.

Jealous’ support is more evenly dispersed by gender (14% among men and women) and race (11% white/15% African-American), and he is leading slightly in Baltimore City with 22% of the vote.

Prince George’s Executive Baker’s most significant showing is in PG’s neighboring jurisdiction, populous Montgomery County, where he is ahead of State Senator Richard Madaleno, 37% to 14%. Outside of Metro Washington (the region with the highest number of votes in a Democratic primary), Baker trails Kamenetz and Jealous.

Competitive, multi-candidate primaries are daunting. Voter turnout is light (25% range), often difficult to predict, and the policy distinctions between the various candidates are usually negligible, making problematic the task of advancing campaign themes and crafting messages that attract attention. The grassroots component plays a much more determinative role than in general elections.

The winner here in Maryland will be the campaign that best negotiates these challenges and produces a successful coalition on June 26th.

Maryland Democratic primary voters appear preoccupied with matters across the line in D.C. When asked to pick, among five topics, the most important issue for them in this year’s election, a stout plurality of 41% say “removing Donald Trump,” 25% say “education,” 19% choose “economy and jobs,” with only 5% each saying “climate change” and “immigration reform.”

Thirty-one percent of men say education will be most important for them, while 50% of women say it is removing Trump.