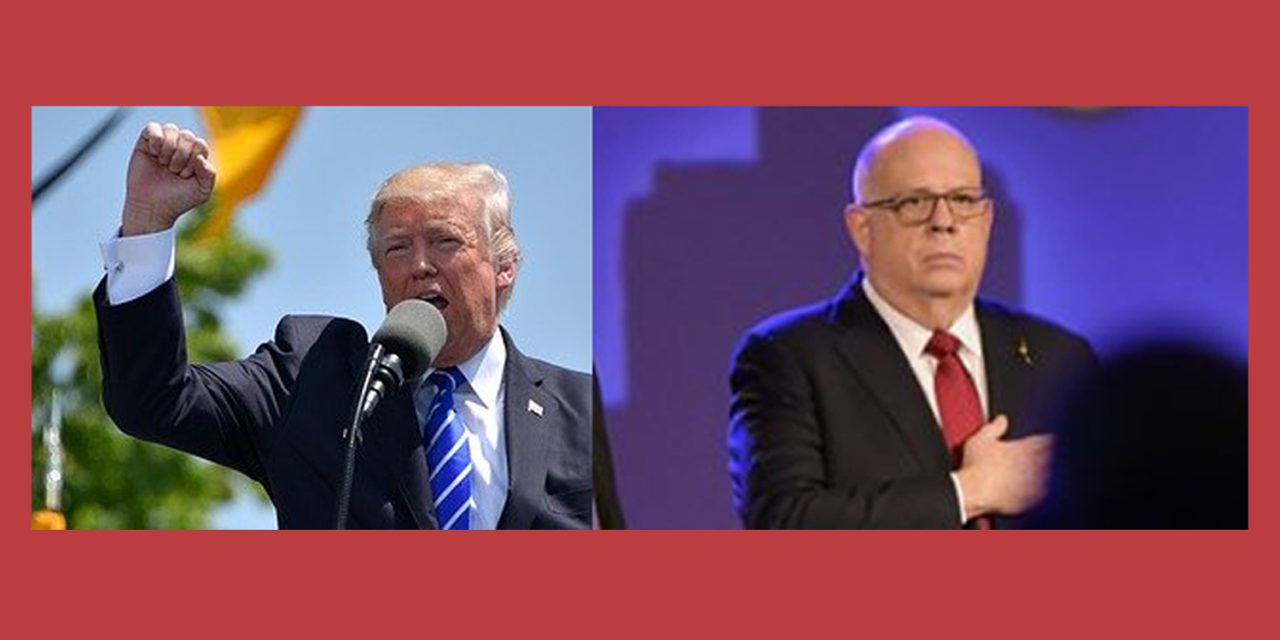 With conspiracy theorist and Trump supporter Dan Cox's victory for the GOP nomination for governor over Hogan-backed Kelly Schulz, who now owns the Maryland GOP and where what will Hogan's next political moves be?

WHO OWNS THE MARYLAND GOP NOW? Maryland Republicans’ choice of candidates in Tuesday’s primary election was also a choice about the direction of the party: Was it still the party of outgoing Gov. Larry Hogan’s pragmatic conservatism, or had the cultural clashes and demagoguery that has swept other states taken control here? The nomination of an election conspiracy theorist for governor – Dan Cox – and a one-time Southern secessionist for attorney general – Michael Peroutka — delivered a clear answer. Pamela Wood/The Baltimore Banner.

DEMS RUSH TO DEFINE COX AS EXTREMIST: One day after Del. Dan Cox declared victory over former state Commerce Secretary Kelly Schulz in the Republican gubernatorial primary, Democrats and their allies rushed to define the GOP nominee as an ideological extremist in the mold of Donald Trump. Or, as Gov. Larry Hogan Jr. (R) famously put it, a “QAnon whack job.” At the same time, a high-profile Republican seeking statewide office signaled that he intends to keep his distance from his party’s nominee. Bruce DePuyt/Maryland Matters.

WHERE DOES HOGAN GO FROM HERE? Maryland’s contest may have broader implications for 2024 presidential politics. Larry Hogan has sought to present himself as a potential alternative to Donald Trump, who has been considering an early 2024 announcement, but the governor’s failure to help his handpicked successor win the nomination in his home state will raise questions about his political clout.  Reid Epstein/The New York Times.

OTHER GOV CANDIDATES BEGIN TO CONCEDE: With votes in the Democratic primary race for governor still being tallied, candidates outside the top group of vote-getters are starting to concede. Ashwani Jain, a former Obama White House official, made the call Wednesday morning. Meredith Cohn/The Baltimore Sun.

OPINION: MARYLAND REPUBLICANS BLOW UP THE PARTY: The apparent victory in Maryland’s Republican gubernatorial primary of a little-known state lawmaker who ran as Donald Trump’s acolyte is a triumph for the former president’s cult of personality and, in all likelihood, a stunning act of political self-immolation for the GOP in the Free State. Del. Dan Cox, the Trump-endorsed right-winger now at the top of the Republican Party ticket on November’s ballot, is, in the view of most political analysts, a dead man walking toward a landslide defeat in November. Editorial Board/The Washington Post.

OPINION: AND I WANT NO PART OF THE FIREWORKS: Republican voters decided to throw that legacy of success away on Tuesday. They decided to piss on the successful legacy of the Republicans who came before them and nominated candidates for governor and attorney general who are wholly unqualified for office and completely incapable of winning. It is the ultimate act of self-immolation from members of a party where that just eight years ago was starting a renaissance. With that, I will be disaffiliating with the Republican Party on Aug. 1 when Maryland reopens their voter registration period. I will become an unaffiliated voter, for the time being. Brian Griffiths/The Duckpin.

A HISTORY LESSON: QUICK ELECTION RESULTS A MODERN OCCURENCE: Maryland residents voted in statewide primary elections Tuesday, but it could take days — or even weeks — to get final results in all the races. Maryland is the only state that doesn’t allow mail-in ballots to be counted until two days after an election, and the volume of these ballots — expected to be close to half a million — could mean lengthy waits in close contests. In this modern era of technological expediency and instant gratification, Americans generally expect to know election results within a matter of hours. But it wasn’t always that way. David Kindy/The Washington Post.

MAIL-IN BALLOT COUNTING BEGINS: Election officials will count the first batch of mail-in ballots Thursday at the Board of Elections Office in Glen Burnie. About 13,000 ballots will be counted, according to Richard Siejack, deputy board of elections director of Anne Arundel County. Dana Munro/The Capital Gazette.

ADAMS CONCEDES TO LIERMAN IN COMPTROLLER’s RACE: In the race for comptroller, Bowie Mayor Timothy Adams called for unity in his concession to Brooke Lierman on Wednesday morning. “Although this is not the result we hoped for, I want to congratulate Del. Brooke Lierman on a well-fought campaign and victory. Hannah Gaskill and Caitlyn Freeman /The Baltimore Sun.

REDISTRICTING COULD PUSH BLUE CONGRESSIONAL DISTRICTS PURPLE: Early voting and election day counts were enough to call winners in 12 of 16 congressional races, even as hundreds of thousands of mail-in ballots have yet to be counted. The Republican contests in Districts 2, 3, 4 and 7 were still too close to call Wednesday. All seven incumbents representing Maryland in Congress and U.S. Sen. Chris Van Hollen secured their parties’ nominations. But come November, newly drawn congressional district maps assigned this year by the General Assembly may set up some historically blue districts to trend purple, giving the winners of Tuesday’s Republican primaries a wedge into traditionally Democratic strongholds. Brenda Wintrode/The Baltimore Banner.

SEN. ECKARDT AMONG 6 INCUMBENTS HEADING FOR A LOSS: State Sen. Adelaide Eckardt (R-Middle Shore), a 28-year veteran of the General Assembly, was trounced in her re-election bid Tuesday, losing the GOP primary in the 37th District to Del. Johnny Mautz by a 3-1 margin. Eckardt was one of six General Assembly incumbents who appear to have lost on Tuesday — and the only senator — though the fate of several others could be determined over the next few days by the pending count of more than 213,000 mail-in ballots. Josh Kurtz/Maryland Matters.

MO CO EXEC RACE AGAIN A SQUEAKER FOR ELRICH, BLAIR: As a blistering rematch for Montgomery County executive between incumbent Marc Elrich and Potomac businessman David Blair winds down this week, the Democratic primary candidates are again stuck where they were four years ago: watching and waiting. Karina Elwood/The Washington Post.