Former Rep. Bob Bauman, an Eastern Shore Republican, and Rep. Tom McMillen, a Democrat who had played professional basketball, offered these reminisces of President George H.W. Bush, who is lying in state at the Capitol Rotunda until Wednesday. Bauman now lives in Florida. McMillen lives in D.C.

George Bush won election to the House of Representatives from Texas’ 7th district in 1966 and was re-elected in 1968.

Within days after he first took office in 1967, when he came to the floor of the House, he made a point of introducing himself to the House Republican Cloakroom staff, asking the late Tom Winebrenner and myself our names. It was “Tommy” and “Bob” thereafter, and he never forgot.

At Christmas, we received a fifth of Jim Beam from him. I don’t recall ever getting a Christmas gift from another congressman. 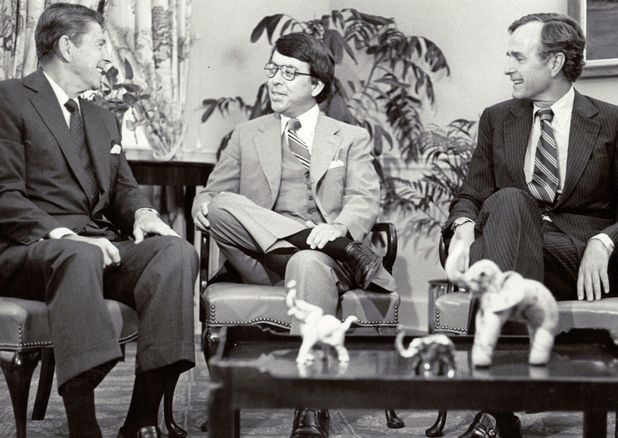 Indeed, as I ran for office, Bush always remembered our initial Republican Cloakroom meeting, as when, we posed for my re-election campaign photos in 1976 and 1980.

But the true George Bush is underscored by the fact that the photo that heads this article was taken at all.

It was at the vice president’s official mansion in Washington in 1982.

It was a gathering for conservatives, including officers of the American Conservative Union and others attending CPAC (Conservative Political Action Committee).

There had been some question if I would be included, and as soon as I arrived, one of the VP’s staff took me aside and said: “Under the circumstances, it would be better if you did not have a photo with Mr. Bush.” At the time, I was a candidate for the House again, after my 1980 defeat. [Editor’s note: Bauman lost the 1980 election due to an arrest that uncovered his problems with drinking and his sexual orientation. He is the author of “The Gentleman from Maryland: The Conscience of a Gay Conservative.]

I don’t know if Bush heard him or not, but within seconds, Bush shook my hand and called to a nearby photographer to take the picture above. He wished me well in my election effort, knowing my situation. Another photo taken that day was in every weekly in Maryland’s First District a few days later. [Bauman lost his re-election bid.]

May he rest in well-earned peace.

Reaching out to Democrats 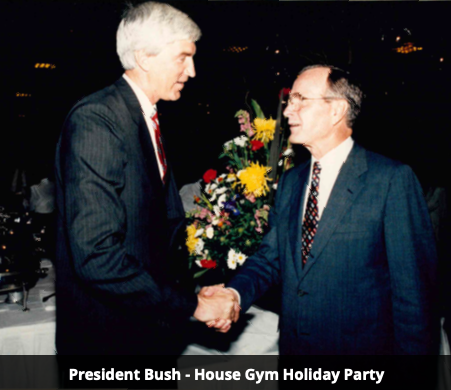 Over the years I often ran into George H. W. Bush in Washington. As an avid sports fan, he was always very interested in my sports career. But my most memorable moments with former President Bush were during my tenure in Congress. I served two of my terms in Congress as a Democrat during his one term as President.

On Sept. 28, 1989, I had just returned to my office after voting on the floor of the House of Representatives to lower the capital gains tax rate, a priority for the Bush administration but one my Democratic colleagues were strongly opposed to.

My phone rang and I was invited to meet President Bush at Andrews Air Force Base the next morning to accompany him to the retirement ceremony for the chairman of the Joint Chiefs of Staff, Admiral William Crowe.

The President was visiting South Carolina earlier that morning to inspect the damage from Hurricane Hugo, and I was told he would meet me when Air Force One returned and landed at Andrews and the President and his staff would switch to the presidential helicopter to journey to Annapolis.

I am sure the White House invitation was a thank you for my vote but it was certainly a thrill for a young congressman to accompany the President to the Naval Academy, which was in my district. When Air Force One landed, I quickly boarded the presidential helicopter Marine One, along with the President, his chief of staff John Sununu, and his National Security Advisor Brent Scowcroft.

We had a short flight to Annapolis in which we talked about sports, politics, and the Naval Academy. When we landed, I joined the President in the presidential limousine to the Academy and the retirement ceremony. Ironically, two years later, Admiral Crowe endorsed Bill Clinton over Bush for the 1992 election.

Voting for the first Iraq war 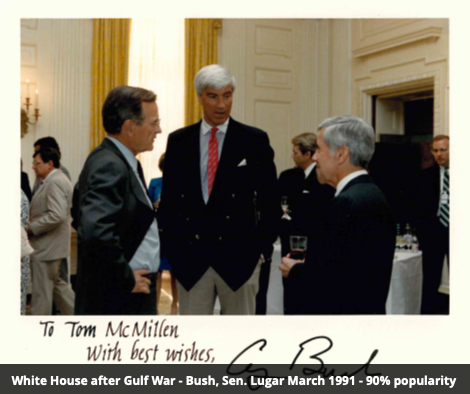 On January 13, 1991, I had voted to give President Bush approval to go to war against Iraq. It was a tough vote and although the House vote of 250-183 provided a comfortable margin, the vote was made possible by 86 Democrats who crossed party lines and supported giving President the authority to use force if he felt it was necessary to remove the Iraqi army from Kuwait.

I was one of those Democrats and knew that the vote would be controversial in my district. My town meetings on the Gulf War vote had turned into shouting matches, and I knew I would get grief from my constituents for my vote.

I had canceled a trip to California because I felt the gravity of my vote and the seriousness of sending our troops into harm’s way. Instead, I went home to think about the fact that we might have just declared war, and I tried to rest but slept fitfully throughout the night.

The next morning, very early, my phone started ringing and I was hesitant to pick it up lest a constituent was trying to reach me and scold me for my vote. Eventually, I picked up the phone and the operator said it was a call from Camp Springs, Maryland, which was in my district.  I immediately hung up to avoid a confrontation.

The phone kept ringing and ringing and finally, I picked it up again, and my administrative assistant berated me for hanging up on the President of the United States who was calling me from Camp David.

Boy did I feel foolish!
I collected myself and President Bush called back and he graciously thanked me for my vote. I congratulated the President on the international coalition he had assembled and strongly urged him to do all he could to avoid a conflict. The President, in closing, said he would do so.

Working out in the House gym

On February 26, 1991, I ventured into the House gym to work out and I could see from all the Secret Service agents that President Bush was playing racquet ball with some of his former House colleagues (as a former House member, he still had gym privileges).

As I was working out, I was watching CNN and an announcement came over the network that Saddam Hussein had surrendered. By then, President Bush was in the sauna with his buddies.

I turned to the Secret Service agents and asked if the President knew about this development, and they told me to go tell him the good news. So I opened the door of the sauna and with steam blocking my view, I said to the President that I had just heard that the war was over.

He said, “Tom—that is truly great news and thanks for letting me know.” I’ve wondered how often someone has the opportunity to tell a President that a war is over.

After the White House

After the White House, I would occasionally run into the President. Once I was walking through National Airport and I heard someone holler my name—and I turned and it was President Bush.

He was always kind to me—I guess he saw in me the same blend of athletics and politics that marked his own life.
President George H. W. Bush will be remembered as a good and decent man who always put country ahead of politics and ambition. The times he reached out to me—a Democrat—showed his willingness to work with his political opponents and cultivate support from both sides of the aisle—even though I often voted against his initiatives and supported Bill Clinton in 1992.

I had the privilege of visiting his Presidential library in College Station, Texas, this past year, and it reaffirmed the great honor it was for me to serve as a congressman while he was our president. I will always cherish my memories of his dignity and grace.