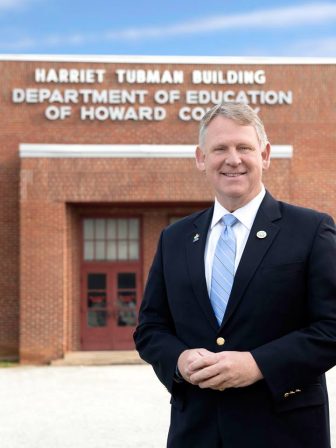 It was a weepy celebration in Ellicott City Friday, as Howard County Executive Allan Kittleman’s official portrait was unveiled in the county seat.

For Kittleman himself, family, friends, allies, supporters and executive staff — more than a half dozen losing their jobs this Monday along with Kittleman — the abrupt end of the regime came four years earlier than any of them expected.

Not only did it mark a jarring halt to a political career that some had seen going all the way to the State House as governor. It also marked a 32-year low point for the Republican Party in Howard County.

It was the nadir of a rising trajectory that had been led by Kittleman’s father Bob, who in 1982 became the first Republican Howard County had ever sent to the legislature. 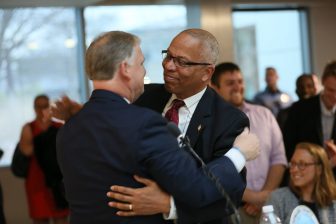 It was the mention of the late Bob Kittleman, whom Allan succeeded in the state Senate after his death in 2004, that got Lt. Gov. Boyd Rutherford choked up as he spoke of the Kittlemans’ service.

“Allan, you know that your dad is very proud of you,” Rutherford said.

Re-elected by a huge margin with Gov. Larry Hogan, lawyer Rutherford had served on the Howard County Republican Central Committee in the 1990s at the peak of their local power.

Allan Kittleman, 60, got emotional as he talked about his father, who in the 1960s was the only white person to serve as the president of the county NAACP. In fact, Kittleman was emotional even before he started speaking as he was introduced by his daughter Mary.

Kittleman supporters are still having a hard time wrapping their heads around the Kittleman defeat at the same time Larry Hogan was carrying the county by almost 20,000 votes.

Kittleman and Hogan were cut from the same cloth, noted former county GOP chair Loretta Shields — well-liked, moderate Republicans with a bipartisan record who had deliberately distanced themselves from President Trump. They supported each other’s re-election enthusiastically.

The down-ballot results made clear that Democrats only voted for Democrats, except for Hogan. Unofficial figures showed that 47% more Democrats showed up to vote in Howard County than they did four years ago — the second highest percentage increase in the state.

Those Democrats lined up particularly in early voting. Except for Hogan, every Republican on the Howard County ballot lost in early voting tallies, including the only three who eventually won. David Yungmann, the new County Council member from the western district Allan Kittleman once represented, only pulled it out with election day results, as did District 9A Dels. Trent Kittleman, Bob’s widow and Allan’s stepmother, and Warren Miller. He actually lost the Howard County portion of the district, saved by the more conservative voters in the Carroll County sliver of the district.

Del. Trent Kittleman has been through all the ups and downs of Howard County Republicans. In 1978, as Trent Mitchell, she had run with Bob Kittleman for County Council and lost when all five-seats were elected at large.

As the party grew in strength, aided by residential development outside of liberal Columbia in the 1990s, Howard County picked up more seats in the General Assembly, and they initially went to Republicans.

In 1986, Del. Bob Flanagan was elected to the House, until he was named Secretary of Transportation in 2003 by Republican Gov. Bob Ehrlich. He regained a seat in single-member District 9B in 2014, but was handily beaten this year by Courtney Watson, the former County Council member who lost to Allan Kittleman in 2014.

District 9 is a gerrymandered district that pundits like me considered safely packed with Republicans and Republican-voting Democrats. But it showed the power of the blue wave this year.

District 9 voters gave Hogan a big majority in 2014 — as they did again this year. They had actually voted for Donald Trump in 2016.

But Sen. Gail Bates, who succeeded Allan Kittleman when he ran for executive, was no match for the Democrats new recruit, Katie Fry Hester, a consultant with an engineering degree who believed that a moderate Democrat like herself could beat Bates. She knocked on doors in the sprawling district — reaching homeowners down long driveways who had never had a candidate on their doorstep.

She raised over $122,000 for the campaign, the bulk of it in the last four months. Hester did not emphasize her party label, and she did not endorse or campaign with the Democratic nominees for governor or county executive. She also did harsh mailings emphasizing Bates’ highly conservative record on the environment and some women’s issues.

Hester rode the purple surfboard on the Democratic wave. In early voting, she beat Bates by thousands of votes in Howard County. Bates still won in the smaller slice of more Republican Carroll County, which has no elected Democrats. But as absentee and provisional votes were counted, Hester wound up winning by over 1,000 votes of the 65,000 votes cast, 50.7%.

In the 1990s, Howard County Republicans controlled the local government — 14 positions in all. They had elected the county executive (Chuck Ecker), a majority of the county council, all of the courthouse offices — state’s attorney, sheriff, clerk, register of wills — two of three senators, four of eight delegates. GOP control lasted less than a decade as Democrats redrew district lines for council and legislature.

Now Republicans will hold just three of the posts.

In his farewell speech, Allan Kittleman touted bipartisanship, calling out the presence of senior Democratic U.S. Sen. Ben Cardin, just re-elected to a third term, and County Councilman Calvin Ball, the man who defeated Kittleman and attended the ceremony quietly.

Kittleman touted the success of bipartisanship as one of achievements of his administration. But the reality is that there will now be little reason to cross party lines to get anything done.

While some of his staff look for work, Kittleman will not miss a beat. Gov. Hogan appointed him to the Workers’ Compensation Commission, where the commissioners rule on injury claims in a quasi-judicial role. Kittleman spent most of his legal career on workers’ compensation.

Commissioners are paid the same as a state district court judged, $146,333 a year, serve for 12-year terms (two years longer than a district judge), and must follow the same rules of conduct as the non-political judges. This means that Kittleman will be banned from political activity as a candidate or participant while he serves in this post, and would have to resign to run for office. He is actually serving out the term of another commissioner and will serve 11 ½ years..

For more background on Howard County politics, read the chapter in Len Lazarick’s book and series, Columbia at 50.