JUDICIAL PERFORMANCE REVIEW: Maryland judges serve what are believed to be the longest terms in the nation — 15 years for elected Circuit Court jurists, a decade for appointed District Court justices. But unlike 17 states and the District of Columbia, Maryland does not routinely evaluate the performances of judges with the type of program that watchdogs say is essential to maintaining public trust, informing voters and helping judges improve. Amid the recent string of bad news about the bench, calls are intensifying for Maryland to establish a program to evaluate judges, reports Doug Donovan in the Sun.

WIDENING BELTWAY I-270: Maryland Transportation Secretary Pete Rahn on Thursday revealed more information about Gov. Larry Hogan’s proposal to add capacity to congested highways in Montgomery County, writes Andrew Metcalf for Bethesda Beat. Rahn said the state is pushing to add four toll lanes to the entire Capital Beltway and I-270 through a public-private partnership that ideally won’t cost the state any money. He said the private partner would be tasked with figuring out how to pay for an estimated $7.6 billion project to add the lanes to the two highways through toll revenue.

METRO WATCH DOG WATCHED: Faiz Siddiqui of the Post reports that Metro’s former inspector general said the office was kept under close watch during her tenure — scrutiny that wasn’t applied in her previous job as an assistant IG in a federal agency — days after a Senate panel questioned the independence of Metro’s internal watchdog. Helen Lew said Metro’s Office of Inspector General, or OIG, needs more autonomy, similar to that of a federal inspector general’s office, which would allow it to call attention to the agency’s problems — unencumbered by staff and board interference.

GOVERNMENT UNDER-STAFFED: The executive branch of Maryland’s state government needs to fill 1,200 vacancies and create another 1,200 new positions to carry out essential functions, legislative analysts have concluded. Michael Dresser of the Sun reports that the Department of Legislative Services has told the General Assembly’s Spending Affordability Committee that abolition of more than 7,700 positions in state government by governors of both parties since 2002 has left the government seriously understaffed.

YOM KIPPUR CONTROVERSY: The editorial board of the Frederick News-Post is urging the county school board to listen to parents who are upset about schools staying open on Yom Kippur, the Jewish day of atonement, in an effort to meet a calendar requirement mandated by Gov. Larry Hogan. Despite the recommendations of a 24-member calendar committee to close on Yom Kippur, the board opted to release the new proposal, in part, to see what feedback would be received.

SEN. OAKS QUITS JOB: Sen. Nathaniel Oaks, who is under federal indictment on corruption charges, has left his longtime private job, his employer announced Friday. Michael Dresser of the Sun writes that, in an email to employees of Chesapeake Employers Insurance Co., chief executive Thomas Phelan informed the staff that the 71-year-old Baltimore Democrat turned in his resignation Thursday.

DISTRICT 15 SLATE: Three incumbent state legislators in District 15—Sen. Brian Feldman of Potomac and Dels. Kathleen Dumais of Rockville and David Fraser-Hidalgo of Boyds—filed for re-election this week, and announced they will run together as the “District 15 Team Slate,” Louis Peck of Bethesda Beat reports. 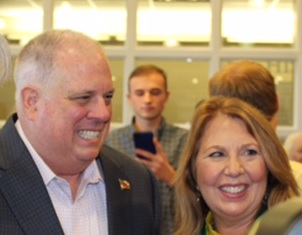 SEN. SERAFINI FILES FOR RE-ELECTION: Sen. Andrew Serafini, R-Washington, filed for election to his Senate seat in District 2, writes Tamela Baker in her Political Notebook column. Appointed in 2015 to replace former Sen. Christopher Shank, who joined Gov. Larry Hogan’s administrative staff, Serafini served in the House of Delegates from 2008 to 2015. Serafini serves on the Senate Budget and Taxation Committee and several subcommittees.

DRESSER ON POLITICS: A Miner Detail Radio host Ryan Miner talks with Sun reporter Michael Dresser on a number of topics, including the evolution of journalism, the Baltimore County executive race, the eight Democrats running for governor and Larry Hogan’s path to re-election.

DRESSED UP AS PROGRESSIVES: In a column for Red Maryland, Brian Griffiths writes that Our Maryland is a so-called progressive “online multi-issue education and advocacy organization” that ostensibly exists to “promotes progressive ideals.” In reality, he writes, Our Maryland is nothing more than a propaganda rag for the Maryland Democratic Party establishment. It appears to be created to co-opt the progressive insurgency within the left flank of the Democratic Party.

***MARYLAND FARMERS ASK FOR DRIVER PATIENCE: Combines are huge machines that are used to harvest crops. To get from field to field,the average top speed for a combine driving down the road is less than 20 miles per hour. According to farmer Eric Spates, a machine that large and heavy is not what he’d call ‘nimble’ even under the best circumstances. These big machines take up a lot of room and they’re slow. Spates asks drivers who come up behind a combine or other farm equipment to be patient and let the driver find a safe place to pull over to let you go by. Here is his story. SPONSORED CONTENT from MyMDFarmers.com blog***

AT STATE GOP CONVENTION: Red Maryland Radio hosts Brian Griffiths and Greg Kline were joined by WBAL’s Andrew Langer at the Maryland State Republican Party Fall Convention in which they interviewed many people including Arundel Councilman Jerry Walker and Del. Tony McConkey back to back talking about the intense campaign in District 33 and the recent negative mailers. They also spoke with Arundel County Exec Steve Schuh among many others.

WALKER DECRIES MAILERS: The Capital Gazette’s Danielle Ohl reports on Councilmember Jerry Walker’s Friday press conference at which he described some of the mailers being sent against him by fellow Republicans in his race for the House of Delegates as “outright lies.”

CARROLL GOP COMMITTEE CONTROVERSY: The Carroll County Republican Central Committee added a new member last week, though no vote was officially taken, creating internal conflict among the group, reports Emily Chappell of the Carroll County Times. Chris Tomlinson was officially sworn in on Tuesday, Nov. 14, after being chosen by committee Chair Larry Helminiak. Tomlinson was one of four people who applied for the position and replaces Matt Helminiak, who resigned in August. 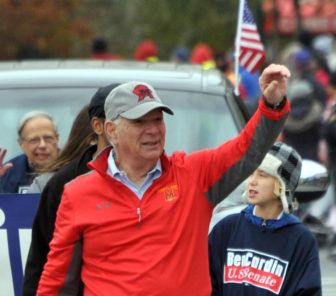 CARDIN ADDRESSES VARIETY OF ISSUES: Josh Kurtz of Maryland Matters interviews Sen. Ben Cardin (D-Md.) on a variety of state and national issues. Cardin always seems to find himself in the thick of major policy battles. As ranking member of the Senate Foreign Relations Committee, he led a delegation of five Democratic senators to the U.N. climate conference in Germany, where they were part of a large delegation of Americans still committed to the emissions reduction goals of the 2015 Paris accord — even though the Trump administration is trying to withdraw from the pact.

MONTGOMERY ELECTIONS: In an election cycle defined by the debut of term limits and public financing, dozens of candidates in liberal Montgomery see impending turnover on the County Council as their opportunity to enter local politics. Yes, a few Republicans, too, reports Rachel Siegel for the Post.

PUBLIC CAMPAIGN FINANCING CONCERNS: Adam Pagnucco in Seventh State writes about the length of time and cumbersome requirements of Montgomery County’s public campaign financing process, in use for the first time in this election.

DRESSED UP AS PROGRESSIVES: In a column for Red Maryland, Brian Griffiths writes that Our Maryland is a so-called progressive “online multi-issue education and advocacy organization” that ostensibly exists to “promotes progressive ideals.” In reality, he writes, Our Maryland is nothing more than a propaganda rag for the Maryland Democratic Party establishment. It appears to be created to co-opt the progressive insurgency within the left flank of the Democratic Party.