2.17M MARYLAND BALLOTS CAST: Over half of Marylanders have already cast ballots. As of Sunday evening, 2,170,000 people had already voted, 52% of registered voters. With Monday as the final day for early voting, 853,000 had voted in person, including 312,000 Republicans, 31% of registered Republicans. As of Saturday, 1,317,000 mail in ballots had been received, 69% from Democrats. 366,000 mail-in ballots have yet to be returned. They must be received by local election boards by Nov. 13. In the past, the last day of early voting has had the heaviest turnout. MarylandReporter.com

FROSH WARNS OF ELECTION SCAMMERS: Maryland Attorney General Brian E. Frosh (D) is warning state residents about scammers who are calling voters, pretending to be from the Board of Elections and asking for Social Security numbers to process ballots, Ovetta Wiggins of the Post. 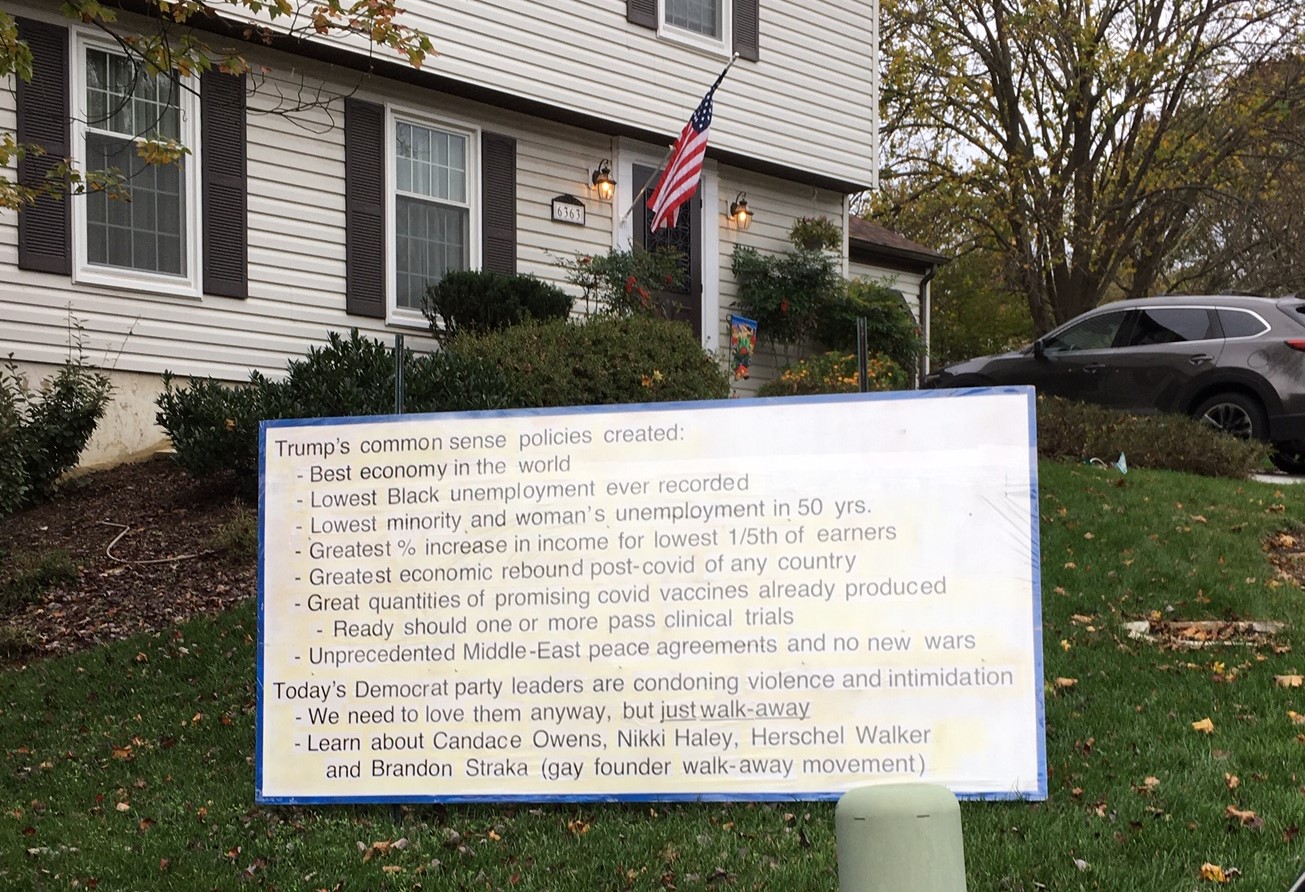 It is rare to find a Trump sign on most Columbia streets, but here is a large homemade sign on Tinted Hill in the village of Owen Brown. MarylandReporter.com photo by Len Lazarick

WHAT TO EXPECT ON ELECTION DAY: The Baltimore Sun will have live coverage from the polls Tuesday, Nov. 3, as well as returns once they start being tallied. Check back here for everything you need to know on Election Day. In the meantime, writes Emily Opilo for the Sun, here’s what we know, and what to expect.

IN HOSPITAL? QUARANTINED? HERE’s HOW TO VOTE: If this election season you are quarantined or in the hospital, there are still ways to vote in Maryland. Ryan Dickstein of WMAR-TV consults with the Maryland State Board of Elections to explain how.

PANDEMIC IMPACT WORSE FOR SOME VOTERS: Kyle Swenson of the Post writes about Anthony Rolls and his attempts to register to vote. “Rolls’s unemployment benefits stopped nearly seven weeks ago because of bureaucratic confusion. He is two months behind on rent. His phone only works now on WiFi, which means he’s been chained to his townhouse… firing off emails to elected officials for help and waiting for the phone call from the Maryland department that might fix the situation, while constantly watching election coverage on television. He has voted in every presidential election — until now.”

VOTING IN JAILS: At the Howard County Detention Center, small groups gathered in the jail’s chapel last month. They weren’t there to pray, but to talk about something else many people consider sacred: their right to vote, Alison Knezevich and Emily Opilo of the Sun report.

JUDGE REJECTS HARFORD VOTER’s REQUEST TO VOTE MASKLESS: A Harford County father and son’s request for a temporary restraining order so they could vote without wearing masks was rejected Friday, as was their lawsuit contending that they were denied the right to vote, Emily Opilo of the Sun reports.

THE FUTURE OF NUCLEAR ENERGY: Nuclear energy is valued as a zero-emissions generation solution. Visible nuclear power is based on 1950’s technology that was optimized to power ships and submarines; but what is in place today does not forecast the future! This FREET webinar on November 5th looks at the issues confronting Maryland today as well as the potential of nuclear fission. What does science and technology tell us is inevitable 50 years from now? The vision is that nuclear fission can be a clean, sustainable, safe, and secure fuel source.

OPINION: RESIDENTS, BIZ ALONG PURPLE LINE NEED ANSWERS: “The Purple Line is a mess, literally and figuratively,” opines the editorial board for the Post. “At this rate, Marylanders may be lucky if the project is up and running by 2025. And in the meantime, ripped-up streets, partially finished bridges and tunnels, and other massively disruptive eyesores are visible for the length of the track right of way and its 21 stations. That is massively unfair to residents and businesses along that route.”

HOGAN RENEWS STATE OF EMERGENCY: Gov. Larry Hogan renewed the state’s COVID-19 State of Emergency on Friday, a day that saw the nation surpass 9 million cases of the often-deadly virus, Bruce DePuyt of Maryland Matters reports. It’s the 10th renewal the governor has issued since the coronavirus crisis hit Maryland in late winter — and it comes as many of the state’s metrics suggest a third wave of COVID-19 infections has begun.

COVID CASES SHOOT UP; 4 MORE DIE: Coronavirus cases shot up by another 864 and at least four more people have died, according to data Maryland officials released Sunday; 523 people are hospitalized. Yvonne Wenger of the Sun reports that since the state began in March tracking data related to the pandemic, at least 146,145 cases have been confirmed and 4,004 people have died.

RETURN TO CLASS DELAYED FOR SOME BA CO TEACHERS: Teachers at four Baltimore County schools for disabled children were supposed to report to their classrooms Monday morning, John Lee of WYPR-FM reports. Their return is being delayed one week while the teachers’ union and the school system negotiate how those teachers can return safely.

FREDERICK TO DISTRIBUTE MORE BIZ GRANTS: Frederick County is gearing up to distribute more grants before the end of the year to help businesses through the pandemic. The money will come from both the CARES Act funding and the newly allocated “rainy day” fund. Erika Riley and Steve Bohnel talk to local businesses to find out what they need to continue to get by.

OPINION: MO CO ON SPENDING SPREE: The editorial board for the Post opines that “state and local governments are tightening their belts, having laid off or furloughed hundreds of thousands of workers in the pandemic. Meanwhile, in Maryland’s biggest and wealthiest locality (Montgomery County), pro-union officials are lavishing major pay increases on thousands of county employees — with no clear way to pay for them.”

UM UPDATES PLACE RENAMING POLICY: Johanna Alonso of the Daily Record reports that “The University System of Maryland has introduced revisions to its building naming policy that expands the section on removing and changing names from one paragraph to over three pages. The revised policy, which includes an appendix describing how institutions can initiate the renaming process, ‘are intended to provide deliberative and thoughtful parameters for USM institutions as they seek to name spaces or programs or if they need to revisit a particular naming.’”

OPINION: PAY FOR BA CO TRADE WORKERS: The editorial board of the Sun opines that the Baltimore County Council has an opportunity to stand up for families, for local jobs and the economy, and for taxpayers by approving a proposed prevailing wage law on Monday.