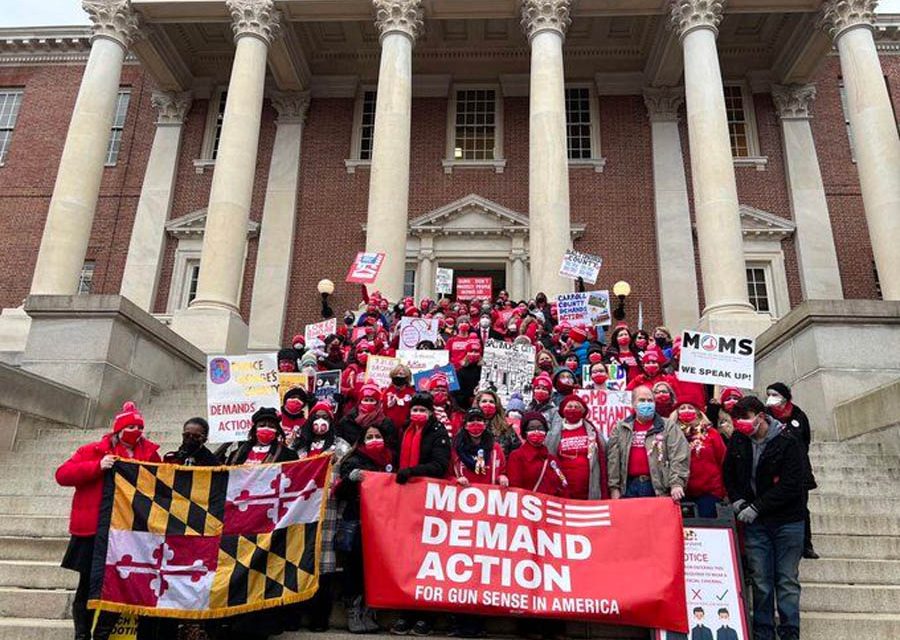 Advocates for a ban on ghost guns rally at the Statehouse steps in Annapolis on Tuesday. Photo by Brad Bell of WJLA-7News wjla.com

PUBLIC SCHOOLS DOWN ABOUT 28,000 STUDENTS: Attendance has dropped by an estimated 28,000 students at Maryland’s public schools this year as system leaders continue to grapple with enrollment losses caused by the COVID-19 pandemic. Lillian Reed/The Baltimore Sun.

RALLY AGAINST GHOST GUNS, FOR COMPLETE BAN: State Sen. Susan Lee (D-Montgomery), who is co-sponsoring a bill to ban ghost guns, said she believes there is a good chance the bill will be passed this year. Lee said Maryland Attorney General Brian Frosh is backing the measure. She was interviewed during a Tuesday rally of survivors of violence and volunteers with the advocacy group Moms Demand Action, who are urging Maryland lawmakers to make legislation banning ghost guns in Maryland a priority. Glynis Kazanjian and Brad Bell/WJLA-7News.

COVID DEATHS ALREADY REACH MONTHLY HIGH: Covid-19 deaths are mounting in Maryland even as new infections decline. With nearly a week left in January, the state on Tuesday already had logged 1,475 covid-related fatalities, more than double the number recorded in December, and higher than any other month since the pandemic began. Rebecca Tan and Jenna Portnoy/The Washington Post.

FLOOR DEBATE ON REMAPPING PLAN COULD START TODAY: The House of Delegates could begin floor debate on a state legislative redistricting plan as early as Wednesday morning after a committee advanced that proposal Tuesday. The House Rules and Executive Nominations Committee voted along party lines to advance the proposal at a virtual meeting Tuesday morning. Bennett Leckrone/Maryland Matters.

BILL WOULD SET UP ELECTED ‘GOVERNMENT WATCHDOG’ OFFICE: A proposed constitutional amendment to add a new elected watchdog to the state government got its first airing in the House Health and Government Operations Committee on Tuesday. House Bill 152, introduced by Del. Vaughn M. Stewart (D-Montgomery) would amend the state constitution to set up a “public advocate” elected office in Maryland to serve as a statewide ombudsman to “receive, respond to, and investigate ethics complaints” against state officials. Bennett Leckrone/Maryland Matters.

OPINION: MAKE THOSE TAX CUTS MEAN SOMETHING: Randolph May of the think tank Free State Foundation, in an op-ed for the Washington Post, opines that given Maryland’s massive projected budget surplus — about equal to the size of Gov. Larry Hogan’s tax relief package — “the legislature should adopt meaningful tax cuts. Absent such action, it’s likely that Maryland’s business climate will continue to worsen, and that Maryland may experience out-migration from the state, especially by retirees.”

NASA PUTS 105 WOODED ACRES IN GREENBELT ON THE MARKET: NASA is moving to sell a 105-acre woodland in Greenbelt, which it used for for cryogenics and rocket propulsion testing. NASA is poised to sell the land, but others are calling for preservation, preferably by making it part of the neighboring wildlife research reserve. Timothy Wheeler/The Bay Journal for Maryland Reporter.

OPINION: VACCINE PASSPORTS: In an opinion piece for the Seventh State, David Lublin opines on Montgomery County and its proposed vaccine passports. He writes: My preference is that Maryland create a vaccine passport but allow each county to determine … their use. … A lack in uniformity is not ideal from a health point of view but it will allow our geographically large counties to pick the policy that fits them. Montgomery can go it alone if Maryland doesn’t act.”

B’MORE BUSINESSES RALLY AROUND ‘THE BLOCK’ OVER SHUTDOWN PROPOSAL: Baltimore business owners from Fells Point and Little Italy joined their colleagues and workers from The Block at a rally outside City Hall Tuesday, decrying a state proposal they say would devastate more than a dozen clubs on the short stretch of East Baltimore Street by closing them before their most profitable hours. Taylor DeVille/The Baltimore Sun.