BATTLING FOR RX POT BUSINESS: Tracy Jan and Fenit Nirappil of the Post write an extensive article on the hurdles that African-American business people face — even groundbreakers like Darryl Hill — is becoming part of the medical marijuana industry, whether it is growing, processing or dispensing the drug. The article is topped by a video report.

RX POT FIRM SEEKS CLARITY: A company that failed in its bid for a medical marijuana growing license is asking the state’s highest court to resolve an ambiguous order Friday that may have left the state’s medical cannabis program in limbo, reports Bryan Sears in the Daily Record.

DISORDER FROM THE COURT: To those trying to make sense of the dizzying mess that is Maryland’s medical marijuana program, the upshot of Friday’s legal action is that the state’s highest court stopped a lower court from stopping the state from issuing licenses to grow the drug. For the moment, anyway. The editorial board of the Sun opines that courts, however, are not likely to be able to craft a solution that protects and promotes the interests of patients waiting for the drug, the state’s policy goals and the legitimate economic interests of those who have made good faith investments to start growing operations. 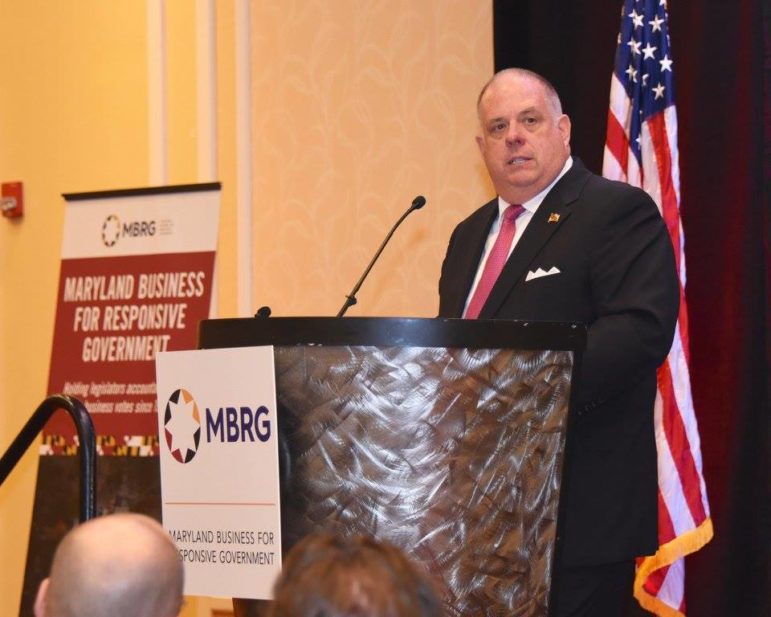 HOGAN’s  ‘STATE OF BUSINESS:’ Gov. Larry Hogan committed to running for re-election Monday and called on businesses to help prevent the legislature from overriding his veto of the Democrat-led paid sick leave law. Holden Wilen of the Baltimore Business Journal writes that Hogan delivered his third “State of Business” address to more than 730 members of the business community at a luncheon hosted by Maryland Business for Responsive Government.

MILLER DISSES COLLINS IN DEPOSITION: In Senate President Mike Miller’s deposition over gerrymandering, he was questioned at length over an opinion column in MarylandReporter by Mike Collins. Miller repeatedly called Collins a partisan hack and fake news, but was forced to admit that Collins quoted him correctly in several harsh statements he made.

BPW POISED TO AID COLLEGE: State officials are a day away from turning over 117 acres of the former Rosewood Center in Owings Mills to Stevenson University, which wants to use the abandoned property to continue its expansion, write Pamela Wood and Michael Dresser in the Sun. The Board of Public Works is scheduled to vote to sell the land to Stevenson for $1. The state also would spend millions of dollars to clean up environmental problems on the site.

CASINO UPDATE: This summer, Live Casino & Hotel, formerly called Maryland Live, will clear dozens of video poker machines from a section of its vast gambling floor so it can demolish a nearby wall. The opening will provide access to a $200 million, 310-room hotel now under construction — a shiny, towering perk that the Anne Arundel County casino considers critical to luring the lavish-spending customers who account for most of its revenue. The casino marks its fifth anniversary on Tuesday in a state of transition, fighting to keep customers against big-brand competition. Jeff Barker writes the story for the Sun.

BROWN, SIX MONTHS IN: U.S. Rep. Anthony Brown caught flak from some and praise from others when he decided not to attend President Donald Trump’s inauguration in January. Six months later, as he reflects on his short time in office, the first-term Democrat said he stands by the choice, Amanda Yeager of the Annapolis Capital reports.

JEALOUS ADDRESSES PG GROUP: Gubernatorial candidate Benjamin Jealous spoke to a group of Prince George’s County Democrats Monday night about expanding economic opportunity and reducing mass incarceration in an effort to win over the party faithful in the backyard of another potential black candidate in what will likely become a crowded primary field, Ariel Hernandez of the Post reports.

CLINTON IN BALTIMORE: Former Secretary of State and Democratic presidential nominee Hillary Clinton, speaking Monday in Baltimore to an organization that provides leadership training to African-American students, said the world would benefit from “steady, determined leadership” in response to the recent terror attacks in the United Kingdom, John Fritze of the Sun reports. The organization is named after U.S. Rep. Elijah Cummings, who was not in attendance. Cummings, who underwent heart surgery late last month, spoke by video to the gathering.

BA CO COUNCIL TABLES IMMIGRATION BILL: The Baltimore County Council has effectively killed a bill that would have required the county jail to screen inmates for immigration violations, but the measure’s chief sponsor vowed to try again, Pamela Wood reports in the Sun. The council voted 5-2 on Monday to table the measure, which would have required the county jail in Towson to join a federal Immigration and Customs Enforcement program known as 287(g) that trains and deputizes county correctional officers to carry out certain immigration enforcement. The bill would have placed the program among official duties of the county’s Department of Corrections.

PG ENGINEER WINS SUIT: An engineer will receive tens of thousands of dollars from the Prince George’s County government to settle a federal discrimination lawsuit in which she argued that her male colleagues, one of whom had less experience, were paid more than she was to do equal work, Arelis Hernandez reports in the Post.

COUNCIL SLASHES PUGH BUDGET: Luke Broadwater of the Sun reports that the Baltimore City Council voted 15-0 Monday to make deep cuts to Mayor Catherine Pugh’s budget proposal to free up more money for schools and after-school programs. Council members said the preliminary vote to cut more than $26 million from Pugh’s $2.8 billion operating budget was designed to pressure the mayor to compromise. The cuts included the mayor’s entire budget office and several of her signature initiatives.