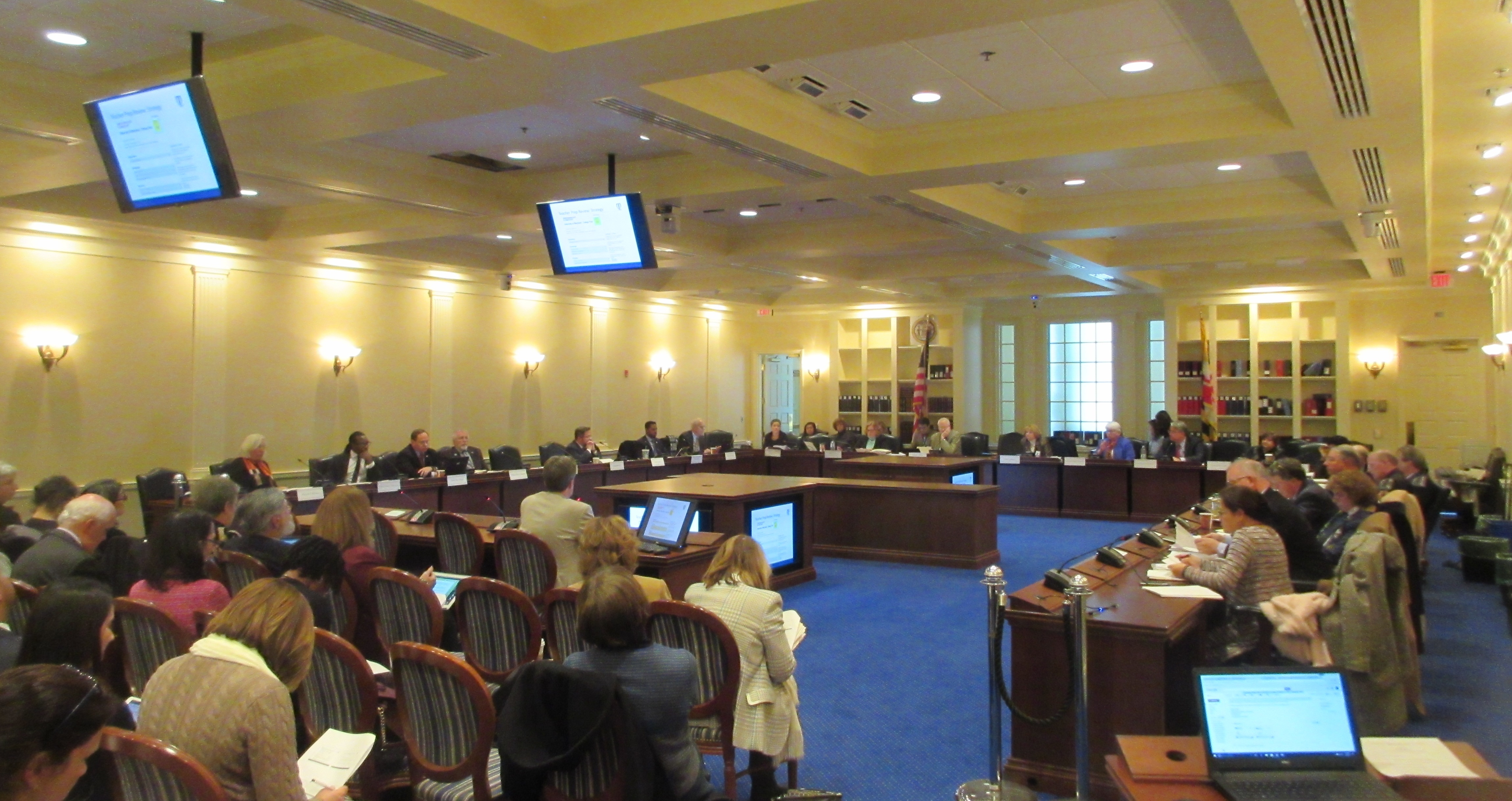 The Commission on Innovation and Excellence in Education met Monday in the House Appropriation Committee room. MarylandReporter.com photo

Compared to teachers in countries with the best performing students, U.S. teachers are less well compensated, have less support to prepare for teaching, have less time for planning and collaboration, and overall have less autonomy in the classroom.

American teachers also spend the most instructional hours in the classroom with larger average class size compared to dozens of the most developed countries.

Those were among the findings of yet another report presented to the Commission on Innovation and Excellence in Education studying Maryland’s school funding and how much it should spend on education in the future.

While Maryland teachers are better paid than most in the United States, the teaching profession appears to be less attractive in the state due to top down accountability pressure and other working conditions, according to Linda Darling-Hammond, president of the Learning Policy Institute.

Monday’s meeting in Annapolis was the fourth session of the commission headed by former university system chancellor Brit Kirwan. At least one commissioner, Carroll County Schools Superintendent Stephen Guthrie, expressed frustration that the commissioners have had little time to discuss the many reports they’ve heard from national experts on what factors make for the highest achieving school systems in the United States and other nations.

Kirwan assured him that discussion by the two dozen commissioners would make up the bulk of the next 10 meetings of the commission that is supposed to make recommendations to the legislature on school funding formulas in December.

The commission also heard a staff report on how education funding in Maryland has risen since the original Bridge to Excellence (Thornton commission) aid formulas were passed by the legislature in 2002.

The report showed that while state aid to county school systems has gone up by $3.2 billion, most of those increases happened during the first six years of the program, and funding after the recession hit in 2008 has grown much slower.

State and local spending on schools now averages $10,163 per pupil, the report said. That is $1,000 per pupil below the current target for adequate funding, and $2,800 per pupil below what funding should be, according to a consultants’ report last month.

CLARIFICATION: These amounts are not total per pupil spending, but the “foundation” amount intended to guarantee an adequate education. It excludes transportation, pensions and other spending.

The commission was told in December that school spending in Maryland should increase by $2.9 billion a year.

The latest revenue projections for the state government show slower growth than expected, and the governor and legislature are expected to reduce mandated spending formulas — further increasing the gap for “adequate funding” of school aid.

The just-started Commission on Innovation and Excellence in Education has been described as largely about rejiggering school funding in Maryland. “Our charge is much, much broader than money,” commission chair Brit Kirwan told the members Monday. “Equally important is how we spend the money.”

Consultants are recommending that Maryland spend $2.9 billion more on public schools each year, a 29% overall increase. The state share would increase by $1.9 billion and the counties would pick up the rest, with some big winners and Montgomery County the biggest loser in the reallocation of school dollars. The commission that will actually make recommendations to the legislature next year about school funding got its first bite at a thick consulting report justifying the increased spending on Thursday, with members questioning the two-year study and its approach.

Is Maryland building ‘Cadillacs or Buicks’ for its new public schools?