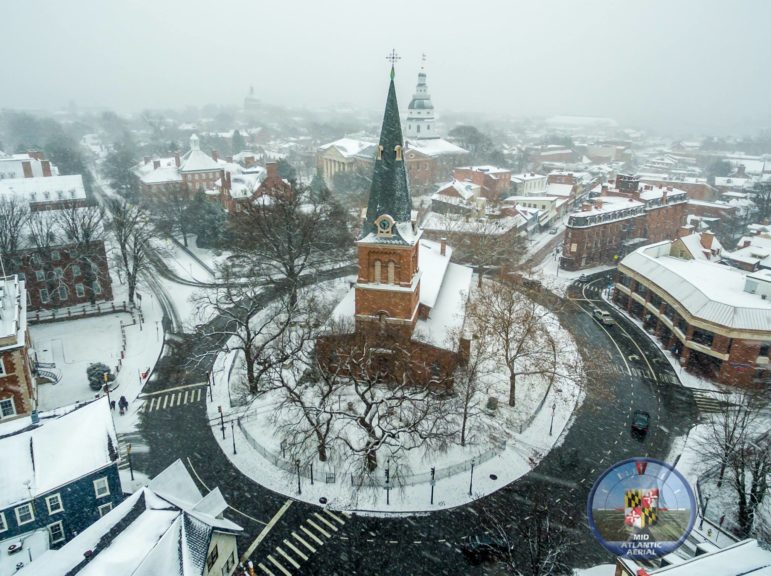 St. Ann’s Epicopal church and Church Circle in Annapolis after Saturday’s snow are the focus of this Facebook photo from Mid-Atlantic Aerial

AS THE SESSION BEGINS: Maryland lawmakers return to Annapolis this week hoping to give their parties an edge for the 2018 election cycle, with Gov. Larry Hogan reaching the midpoint of his term with sky-high approval ratings. Hogan will press the Democratic-majority legislature to adopt some of the initiatives he failed to pass last year, including a plan to lure more manufacturers to the state with a decade-long tax exemption and legislation to rein in mandatory spending growth. Democrats will start the session with a move that could appeal to their environmental base: attempting to override Hogan’s 2016 veto of a bill to expand the use of solar and wind power in the state, Josh Hicks and Ovetta Wiggins of the Post report.

WHAT HOGAN SAYS: Gov. Larry Hogan bills himself as a moderate and bipartisan figure willing to work with Democrats.  But he also says he is unafraid to cut his own path, and when necessary go around the Democratic-controlled legislature as he did to lower tolls in 2015. In an interview Friday with Bryan Sears of the Daily Record, Hogan discussed his first two years in office, his goals for the remainder of his first term, his desire to tame the budget deficit and lower taxes as well as his relationship with Miller and Busch.

COURT DELAYS BAIL SYSTEM ACTION: The highest court in Maryland delayed action Thursday evening on whether to overhaul the state’s money-based bail system so that most poor defendants do not have to pay bail or are allowed to pay what they can afford, writes Ovetta Wiggins in the Post. The Maryland Court of Appeals was considering a rule change that would have directed judges not to set bail higher than what a defendant can afford. After more than 90 minutes of deliberation, the court decided to delay action on the proposal until next month.

HEAD START FUNDING LAGS: Funding for Head Start programs in Maryland fell below national averages during the 2014-15 program year, despite the state’s above-average number of teachers with bachelor’s degrees or higher, according to a report released last month. CJ Lovelace of the Hagerstown Herald Mail writes that the State(s) of Head Start report, conducted by the National Institute for Early Education Research concludes that the federal program varies dramatically from state to state in terms of funding, classroom hours, quality and percentage of low-income children served.

TRIAL ON HBCU FUNDING: A trial to determine the best way to cure inequality among Maryland’s colleges and universities is slated to begin today in federal court in Baltimore, the AP is reporting at WTOP-AM. The decade-old case involves a coalition representing the state’s four historically black colleges that says the state has underfunded the institutions while developing programs at traditionally white schools that directly compete with and drain prospective students away from the African American schools. The trial will determine a remedy.

HOGAN CALLS FOR LIQUOR REG REFORM: A Prince George’s County liquor commissioner accused of accepting bribes resigned from his post Friday, and Gov. Larry Hogan called for the reform of Maryland’s system of regulating alcohol sales, which he called “antiquated” and “without oversight,” Fenit Nirappil and Ovetta Wiggins of the Post report.

END THE BEGATHON: In a few weeks, school superintendents will trek, en masse, to the second floor of the Maryland State House to grovel before the Board of Public Works for additional school construction funds. It is a demeaning “begathon” that long ago outlived its usefulness and turned into a political circus allowing the governor and comptroller to praise and reward their friends in the counties and humiliate their enemies, opines Barry Rascovar in an opinion piece for MarylandReporter.com.

SANCTUARY DEBATE IN HOWARD: Howard County will enter the national debate over immigration enforcement in the coming weeks as elected officials square off over a proposal to designate the wealthy suburb between the District and Baltimore a sanctuary jurisdiction for undocumented immigrants. Legislation would codify existing county practices addressing the gathering of information about citizenship status and when to cooperate with federal law enforcement. County Executive Allan Kittleman announced Thursday that he will veto the measure if it passes, Bill Turque of the Post reports.

AN INTERVIEW WITH BEVERLY BYRON: Frederick knows Beverly Byron, 84, as its long-time local congresswoman who served the Sixth Congressional District from 1979 to 1993, after the death of Goodloe Byron. But Bev’s brushes with historical figures began as a child, continued as a young woman, and were revealed during a recent interview in Bev’s home near Baker Park, where she has lived since the 1950s. She and her husband, B. Kirk Walsh, divide their time between Frederick and Washington, D.C. Don DeArmon writes the profile for the Frederick News Post.

INAUGURATION CELEBRATION, PROTEST: Carrie Wells of the Sun writes that many Marylanders are expected to make the trip to Washington, D.C., for the inauguration of President Donald Trump, some to celebrate and some to protest.