DOCS NOT ON BOARD WITH RX POT: Just 1% of the 16,000 doctors who treat patients in Maryland have signed up for the state’s medical marijuana program, and two of the largest hospital systems in the state have banned their physicians from participating. Meredith Cohn and Andrea McDaniels of the Sun that the lack of enthusiasm threatens to undermine the fledgling program by limiting access to the drug that has shown promise in easing pain and other severe conditions.

SETTING BOND: Each year thousands of people are held on bond — pretrial detention — in Maryland at a cost of millions of dollars, but that could change if judicial officials have to consider a defendant’s financial circumstances in setting bond. Don Aines of the Hagerstown Herald Mail reports that bond rules are on the agenda for a meeting of the Maryland Judiciary’s Standing Committee on Rules of Practice and Procedure on Friday, Nov. 18. 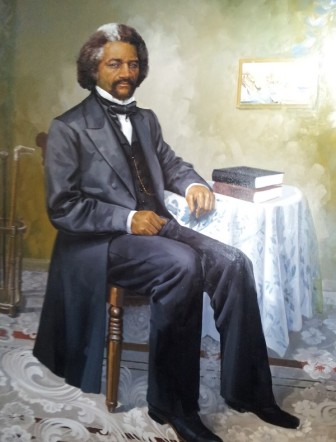 This portrait of Frederick Douglass was hung in the governor’s mansion in 2014.

PUSH FOR TUBMAN, DOUGLASS: Maryland Senate President Mike Miller and House Speaker Michael E. Busch are calling for statues of abolitionist leaders Harriet Tubman and Frederick Douglass to be placed in the State House, Michael Dresser of the Sun reports.

STATE BOWS OUT: The Maryland Stadium Authority bowed out of the $84 million downtown Hotel and Conference Center project in Frederick last week, withdrawing $18 million in state support, reports Peter Samuel for MarylandReporter.com. Gov. Larry Hogan said in an interview Nov. 3 that no state money would be going toward the project.

FROSH’S AGENDA: Citing what he called unfinished business from his nearly 30 years in the General Assembly, Maryland Attorney General Brian Frosh said he plans to support legislation next session to protect users of generic prescription drugs from being gouged on prices. Frosh spoke with Steve Lash of the Daily Record last month during a wide-ranging interview as he approaches the midpoint of his four-year term.

TRUMP GOOD FOR MD’S FBI PUSH? Gov. Larry Hogan expressed optimism Friday that the election of Donald Trump could improve Maryland’s chances of landing the new FBI headquarters, writes Michael Dresser in the Sun. The Republican governor otherwise declined to speculate on what his relationship would be with the president-elect after Hogan’s pointed public refusal to vote for the Republican Party’s nominee.

OR WILL MARYLAND SUFFER? The AP’s Brian Witte, in an article at WBFF-TV, writes that President-elect Donald Trump found little support in Maryland, where even the Republican governor disavowed him. Now Maryland officials hope long-running benefits from the state’s proximity to the nation’s capital won’t suffer under a Trump administration. Maryland has long benefited from federal grants, agency headquarters and other federal largesse.

PANEL CALLED POLITICAL: A legislative commission charged with improving the school construction process in Maryland is too political and too focused on appointments made by Gov. Larry Hogan, according to the panel’s two Republican legislators. The two raised concerns about Chairman Martin Knott’s visitations of schools and communications with legislative leaders, including extending the term of the commission from one to two years, without the knowledge of the full group, reports Bryan Sears in the Daily Record.

LESS OF DRUG CONFISCATED: CNS’s Hannah Lang reports in the Hagerstown Herald Mail that since Suboxone film strips were removed from the Medicaid Preferred Drug List in July, the amount of the drug recovered in Maryland correctional facilities as contraband has decreased by 41%, according to Maryland’s Department of Public Safety and Correctional Services.

WRITE-INS SOARED: With two deeply unpopular nominees on the presidential ballot this year, the number of voters in Maryland who wrote in their own candidate for president more than tripled, according to state election data, Alexander Pyles reports in the Sun. About 32,000 Maryland voters wrote in a candidate for president in 2016. When Democratic President Barack Obama defeated Republican Mitt Romney in 2012, 10,309 Maryland voters wrote in a candidate.

MARYLAND AS OUTLIER: A Martian landing in Maryland on election night never would have guessed that Donald Trump was about to pull off the upset of the century, opines political pundit Barry Rascovar in MarylandReporter.com. That’s because Maryland is an outlier, an exception to what happens in presidential elections in the rest of the country. Trump got slaughtered in Maryland, receiving just a little over a third of the vote.

INSPIRED TO ACTIVISM: Erin Cox and Pamela Wood of the Sun report that President-elect Donald Trump’s surprising victory has galvanized both those inspired and those devastated by his win — including people in Maryland — to ramp up their activism around the causes that divided Americans the most. Organizations that work with immigrants, abortion rights, civil rights and scientific advocacy say they’ve seen a dramatic influx in interest, donations and volunteers since Election Day.

KROMER ON POLLS: Ron Cassie of Baltimore Magazine talks to Goucher College’s Mileah Kromer, the director of the Sarah T. Hughes Field Politics Center, which conducts the Goucher Poll, about why the presidential polls appeared to be so off, what swayed voters in the end, and where disenchanted constituents can go from here.

DELEGATE SEEKS ETHICS CHARGE: WMAR-TV reports that Del. Pat McDonough said he is calling for an ethics charge against Baltimore County Schools superintendent Dallas Dance because of a retweet he made the day after the election. Dance retweeted a tweet from Josh Starr, CEO of the education association Phi Delta Kappa International, in which he urged educators to show non-white students love.

MO CO TURNS AWAY ESTABLISHMENT: In a thundering rebuke to Montgomery County’s governing establishment, voters have passed term limits by a 38 point margin with early votes and election day votes counted.  Folks, let’s call this what it is. A revolt, writes Adam Pagnucco for Seventh State.

SUGARY DRINK SALES DROP IN HO CO: Four years ago, advocates for health dumped 9.6 tons of white sand outside an Ellicott City middle school to launch Howard County Unsweetened, a campaign to ease sugary sodas and fruit drinks out of local diets. On Sunday, they announced the results: Sales of soda at 15 grocery stores in Howard County dropped nearly 20%, according to Marlene Schwartz, director of the Rudd Center for Obesity & Food Policy at the University of Connecticut. That exceeded the annual decrease of between 1% and 2% reported nationally, writes Tim Prudente for the Sun.

RIGGED VOTING: Wanna vote every day for at least a week? Well, you can do just that voting for MarylandReporter.com as the “most informative” website in the Baltimore Sun’s annual Mobbies contest. This is essentially an audience building tool for the Sun, but we actually won in 2013. No idea who nominated us this time, or who left off one of our potential competitors. The Sun folks can’t even tell us yet when the voting will end. Sounds like an ideal contest for 2016, don’t you think? Let’s show ’em who can stuff the ballot box. Vote here. Early and often.

MARTIN MULLS DNC RUN: Martin O’Malley, the two-term Maryland governor who ran unsuccessfully for president this year, said Friday he is considering a bid to lead the national Democratic Party, which is reeling from this week’s upset in the race for president, John Fritze for the Sun reports. O’Malley’s statement came as some liberal leaders appeared to be coalescing behind another candidate for the job: Rep. Keith Ellison of Minnesota.