National experts on state education systems are scheduled to make presentations to the state commission examining state funding and standards for the Maryland public schools Monday afternoon in the House Appropriations Committee hearing room in Annapolis. 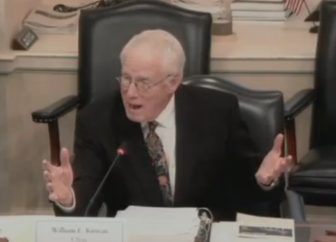 Former university system chancellor Brit Kirwan chairs the first meeting of the Commission on Innovation and Excellence in Education.

Known as the Kirwan Commission because it is chaired by former University System Chancellor Brit Kirwan, the Commission on Innovation and Excellence in Education held its first meeting Sept. 29 and heard an overview of education policy and statistics from State School Superintendent Karen Salmon. She focused on changes in Maryland public schools since 2002, when the massive increase in state aid began from the recommendations of the Thornton Commission. Major changes are the 169% increase in Hispanic students and the 45% increase in the number of disadvantaged students.

The commission also heard a history of education funding in Maryland from staff at the Department of Legislative Services, which is also staffing the commission. The commission also got a preliminary report on a consultant’s study of adequacy of school funding at the present time.

PowerPoint presentations on all three reports are attached to thebottom of the Sept. 29 agenda.

The agenda of Monday’s meeting includes:

“They have been quite successful as a state,” Kirwan said. “How did Massachusetts get to where it is?”

The commission meetings are live streamed and archived on the General Assembly website.

An earlier story listed the commission members with links to their bios. Not on that original list but appointed by the governor to the commission is Scott Dorsey, chairman and CEO of Merritt Properties, who also chairs the board of the Maryland Economic Development Commission and the advocacy group Maryland Business for Responsive Government.

He is one of the few commission members who is not a legislator or does not have any ties to education.