MARRIOTT GETS STATE, COUNTY BREAKS: Marriott International Inc., one of Maryland’s four Fortune 500 companies, will receive nearly $70 million in state and county tax breaks, grants and conditional loans as part of an incentive package to remain in the state, reports Bryan Sears in the Daily Record. The company will build a $600 million facility in downtown Bethesda, maintaining the company’s presence in Montgomery County.

STATE CANCELS CONTRACT: A 15-year-old Maryland girl died at a facility in Delaware for severely developmentally disabled youths, authorities said Tuesday, after the state already had decided to sever ties with the operators, Meredith Cohn writes in the Sun. The Maryland Department of Human Resources said that it had canceled its contract with AdvoServe effective Oct. 31, but had not found appropriate places to send all of the 31 youths housed in company institutions when the girl died.

ENVIROS CALL EFFORTS INADEQUATE: State environmental officials signed off Tuesday on a list of projects that aim to reduce the amount of pollution that rain washes into the Chesapeake Bay, despite criticisms from environmental groups that the efforts are inadequate, writes Scott Dance in the Sun. Gov. Larry Hogan called the plans from Baltimore City and the nine largest counties in the state “innovative” and said they prove a stormwater fee derided as the “rain tax” was unnecessary. A law passed last year gave jurisdictions the option not to collect it.

KAMENETZ’S MIDGES: In a column for Red Maryland, Brian Griffiths writes that Baltimore County Executive Kevin Kamenetz’s war of words with Gov. Larry Hogan has now expanded beyond the classrooms he’s left without air conditioning and gone outside to deal will flies. Midges are running roughshod over eastern Baltimore County and Kamenetz seems disinterested in doing anything about it.

CITY ELECTION WATCHDOGS: Some 1,650 ballots were mishandled in Baltimore City’s primary election, and watchdog groups are calling for volunteer poll watchers to ensure the mistakes are not repeated. Voters Organized for the Integrity of City Elections, a group born from the primary errors, called Tuesday morning for volunteers throughout Baltimore and beyond, Tim Prudente reports in the Sun.

ON HARRIS: Joshua Harris, the Green Party candidate in Baltimore’s mayoral race, has a 21-page plan to revolutionize the city. He wants citizens to vote on budget decisions, a new public bank in which to invest tax dollars and a thriving medical marijuana industry. But with no paid staff and about $1,000 in his campaign account, a billboard propped up in the back of Harris’ burgundy pickup truck is the most visible sign he is in the race, Yvonne Wenger of the Sun reports.

ON WALDEN: Alan Walden smokes a cigar as he distributes gold-and-black fliers advertising his underdog mayoral campaign on a drizzly Sunday afternoon in Fells Point, Yvonne Wenger of the Sun reports. The 80-year-old Republican seeking to lead staunchly Democratic Baltimore is at a street festival, jawing about improving public transit and cutting property taxes. “I’m an unapologetic Baltimore booster,” Walden says in a voice honed over a half century in broadcasting. 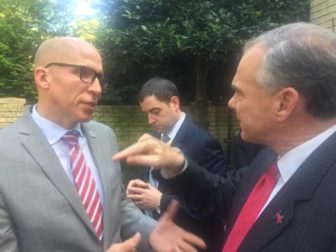 STRONG SUPPORT FOR CLINTON, TRUMP: John Lee of WYPR-FM goes around Baltimore County and finds strong pockets of support for both Donald Trump and Hillary Clinton.