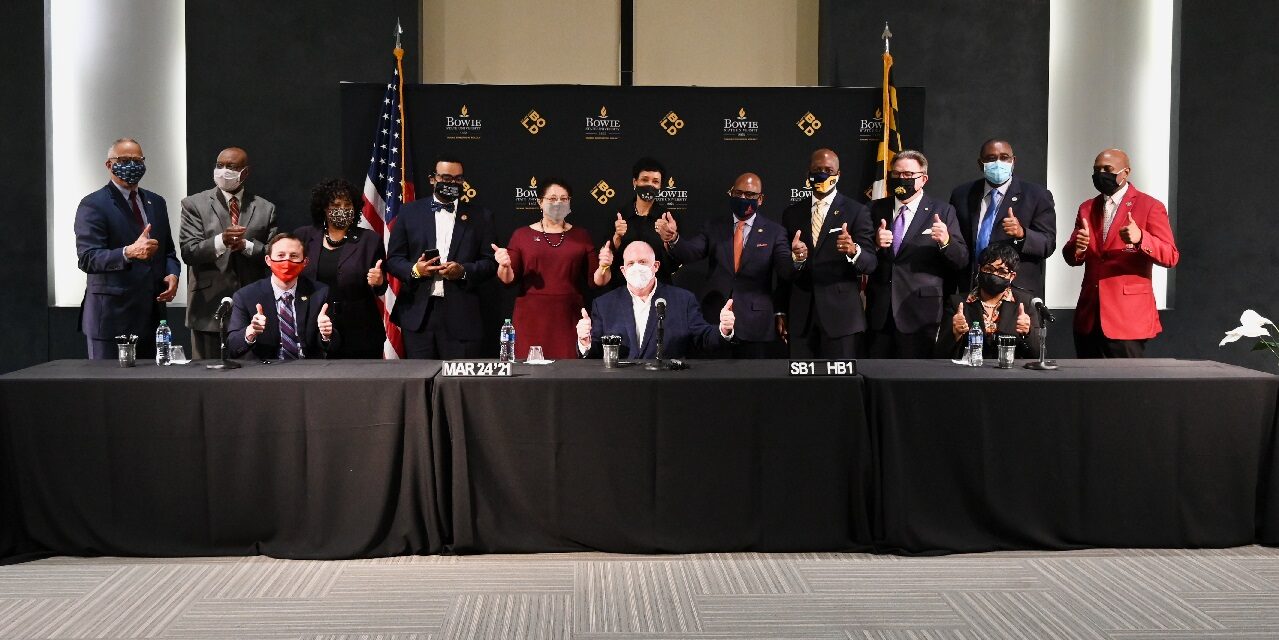 The HBCU funding bill was signed at Bowie State University Wednesday afternoon by the Senate president, governor and House speaker. Behind them are the lieutenant governor, bill sponsors, staff and university presidents. Governor's Office photo.

BPW DELAYS OK ON EMERGENCY COVID CONTRACTS: The Maryland Board of Public Works on Wednesday delayed approving three emergency contracts the state health department awarded to bolster its response to the COVID-19 pandemic, with two of three board members – Comptroller Peter Franchot and Treasurer Nancy Kopp – citing a lack of transparency, Alex Mann and Hallie Miller of the Sun report.

SENATE OKs LEGALIZING DRUG PARAPHERNALIA: The Maryland Senate split largely on party lines Wednesday in passing legislation legalizing the possession of heroin paraphernalia, including needles and syringes. Democratic sponsors of Senate Bill 420 called the legislation necessary to protect the health and safety of heroin addicts, while Republican opponents countered that decriminalization of paraphernalia will benefit the illegal drug trade.

‘BOMBASTIC’ GOP LAWMAKER LOSES CONTROL OF EV BILL: A House committee has rewritten a bill from a bombastic Republican lawmaker that was designed to require state and local elected officials who charge their own personal electric vehicles at state government charging stations to reimburse the government for the electricity they use, writes Josh Kurtz for Maryland Matters. On Wednesday, the sponsor of the bill, Del. Mark Fisher (R-Calvert), rose on the House floor to try to get his bill back. He did not succeed.

MD-VA COMMUTER TRAIN ALLIANCE PUSHED: An alliance of the Washington area’s top chief executives is pushing for Maryland and Virginia commuter trains to cross jurisdictions to provide service that would be more frequent and more interconnected, Luz Lazo reports for the Post.

BAINUM OFFERS $650M FOR TRIB CO.: Maryland business executive Stewart Bainum Jr. wants to purchase Tribune Publishing Co. for $650 million — 10 times the amount he agreed last month to pay for one of its newspapers, the Baltimore Sun. It’s an effort to edge out an already agreed-upon $630 million offer from Alden Global Capital, an investment fund known for acquiring and slashing newspaper operations, Elahe Izadi and Sarah Ellison of the Post report.

HUNDREDS PROTEST RACISM AGAINST ASIANS: Hundreds of people gathered at the Columbia Lakefront on Wednesday evening to speak out against the onslaught of Asian hate speech and violence seen across the country and the state of Maryland in the past few weeks, Ana Faguy of the Howard County Times reports. It was the latest in a series of events supporting the Asian American community in Howard County, where that population accounts for 18% of the residents.

FUTURE OF CONFEDERATE STATUES, EMPTY PEDASTALS: Jonathan Pitts of the Sun writes about the four Confederate statutes in Baltimore that were taken down as the city continues its conversation about what should replace the disgraced statues, let alone being ready to address the complex logistical challenges involved.

GOP PANEL TAPS BURKETT FOR WA CO COMMISSIONER: Charles Burkett, who was tapped by the Washington County Republican Central Committee Tuesday, plans to be a conservative voice if he is chosen to be a Washington County commissioner, Mike Lewis reports for the Hagerstown Herald Mail. “I consider myself to be a fiscally and socially conservative Republican, so that is how I’ll base a lot of my decisions,” Burkett said in a telephone interview Wednesday.