REPLACED RX POT FIRM SUES: A company that lost its bid to grow medical marijuana in Maryland has filed a lawsuit alleging that regulators illegally rejected its application in favor of lower-ranked businesses from underrepresented parts of the state, Fenit Nirappil of the Post is reporting. 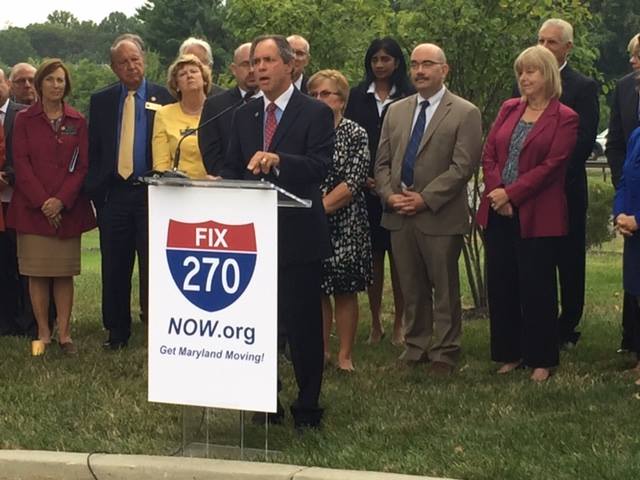 Montgomery County Council member Roger Berliner was one of several elected officials who spoke at the Fix 270 Now event. From Berliner’s Facebook page.

POLS EYE I-270 FOR FIXES: I-270 Leaders from the Fix 270 Now coalition met on a hill overlooking the clogged interstate in Germantown on Monday to advocate for state funding to study — and then fix — congestion on the important Frederick-Montgomery corridor, Danielle Gaines writes for the Frederick News Post. Several Frederick County officials attended Monday’s announcement, including Dels. Carol Krimm and Karen Lewis Young.

SCHOOL BOARDS SHOULD OK HOGAN ORDER: The editorial board for the Carroll County Times opines that despite the informal, 24-page letter from the Attorney General’s office that makes it clear the governor’s executive order could be overturned by the General Assembly during next year’s session, school boards still have local control. If like Carroll County, there is a post-Labor Day option that works, boards should move to approve it. If the General Assembly takes up the issue, this means it may not be decided until spring at best, leaving school calendars for the following year potentially undecided until then.

BAKER PONDERS RUN FOR GOVERNOR: Prince George’s County Executive Rushern Baker (D), who is frequently mentioned as a likely 2018 challenger to Gov. Larry Hogan (R), says he will decide whether to run for governor after the November presidential elections, Arelis Hernandez reports in the Post. Baker, 57, is almost halfway through his second and final term as county executive of Maryland’s second-largest jurisdiction. His record in Prince George’s is mixed.

JACOBS’ CANCER TREATMENT: Cheryl Mattix of the Cecil Whig writes about what former state Sen. Nancy Jacobs is expecting to deal with as she undergoes treatment for cancer. She received the news last week that she has B-cell non-Hodgkins lymphoma, but it’s a non-aggressive form, Jacobs said Monday. “It was a shock to get the news, but I’ve had thyroid issues for years,” she said.

SZELIGA BEGINS TV CAMPAIGN: Republican Senate candidate Kathy Szeliga will begin airing the first television ad in the race to succeed Sen. Barbara Mikulski — an introductory piece that will begin running this week on cable throughout the state, John Fritze writes in the Sun.

GARRETT MEDICAL JOBS PLAN OK’d: Maryland regulators gave the green light last week to a plan by Garrett Regional Medical Center to train and employ patients who frequently need the hospital’s services, reports Daniel Leaderman for the Daily Record. These patients are ideal candidates, both because they have experience navigating the health care system and because they may lack the economic resources — such as adequate insurance and transportation —to manage their illness, officials say.

LEOPOLD PONDERS POLITICAL COMEBACK: Former Anne Arundel County Executive John Leopold, who resigned in 2013 after a judge found him guilty of misconduct, might attempt a return to politics, Amanda Yeager reports for the Sun. Leopold, 73, said he is considering a run for office in 2018 — though he hasn’t yet decided which office. The Republican from Pasadena has launched an “exploratory” campaign website and is starting to knock on doors to gauge voter interest.

CITY CONSIDERS TOY GUN BAN: The Baltimore City Council is considering a citywide ban on toy guns that are made to look like pistols, machine guns and rifles — and have been linked to shootings in Baltimore and cities across the country, reports Yvonne Wenger in the Sun.

COLUMBIA RANKED NO. 1: Money Magazine has ranked Columbia, Md., which is celebrating its 50th year, as the best place in the country to live.