REDISTRICTING SUIT CAN MOVE FORWARD: A lawsuit challenging Maryland’s contorted congressional district map on First Amendment grounds has merit and should go forward, a three-judge federal panel ruled Wednesday, Bill Turque reports in the Post.  The map, drawn by Maryland’s Democratic lawmakers following the 2010 Census, essentially ensured that seven of the state’s eight congressional seats would be under their party’s control. 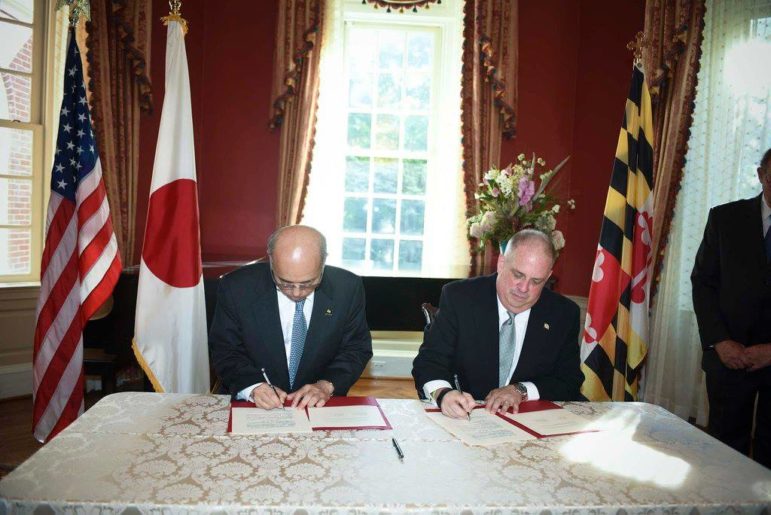 JAPAN TO HELP FUND BULLET TRAIN STUDY: The government of Japan has pledged $2 million to help fund studies on the feasibility of a magnetic levitation train that could shuttle passengers from Baltimore to Washington within 15 minutes, state officials said. Tim Prudente of the Sun reports that on Wednesday, Gov. Larry Hogan signed a trade agreement with Ambassador Kenichiro Sasae, making Maryland the third state to sign such an agreement with Japan, the governor’s office said.

MILLER TARGETS PORTS: Following up on Brian Witte’s story on Senate President Mike Miller seeking Jim Ports’ ouster as the No. 2 person at transportation, Michael Dresser of the Sun writes that in a letter to Transportation Secretary Pete Rahn this week, Miller urged that Deputy Secretary Ports be “relieved of his leadership role in state government” for the “comical display of ineptitude” in his communications with local governments about a new law requiring proposed transportation projects to be scored.

LIMITING ACCESS TO DRUG CHALLENGED: A panel of lawmakers is threatening legislative action to challenge a decision by state Medicaid officials to limit access to a drug used to treat opioid addiction that has become a major contraband problem in Maryland prisons, Bryan Sears reports in the Daily Record.

MEDICAL POT BIZ RANKINGS: Maryland’s medical marijuana commission has released how top applicants ranked to grow and dispense marijuana in the state. Brian Witte of the AP, in a story published by the Sun, reports that the rankings released Wednesday show that Holistic Industries in Prince George’s County and Shore Naturals in Worcester County initially didn’t make it into the top 15 now in line to be licensed to grow marijuana. But they were moved up into the top 15 in order to meet geographic representation outlined in the law.

POLICE AIR SPYING STUNS: The revelation that a private company has been conducting secret aerial surveillance on behalf of the Baltimore Police Department — collecting and storing footage from city neighborhoods in the process — caused confusion, concern and outrage Wednesday among elected officials and civil liberties advocates, Kevin Rector and Luke Broadwater report in the Sun.

POLICE SAY IT WASN’T SECRET: WBAL-AM is reporting that Baltimore Police on Wednesday responded to revelations about department-funded aerial surveillance that’s been ongoing since January, but only came to light this week.

FOUNDATION IN DARK: The Baltimore Police Department was able to keep secret the funding for a surveillance plane that monitored wide swaths of the city by routing project funds through a private foundation — whose director says he was not aware of the purpose of the spending, Justin Fenton and Doug Donovan report in the Sun.

FTA SAYS JUDGE ERRED ON PURPLE LINE: Attorneys for the Federal Transit Administration responded to a federal judge’s order to reevaluate the Purple Line light-rail project by saying the judge erred in citing Metro safety issues to vacate the project’s federal approval, Andrew Metcalf reports for Bethesda Beat. Instead, the attorneys said in a court motion the FTA should have evaluated whether Metro’s issues would warrant a new environmental study rather than being ordered by the judge to conduct a new study.

CARET BONUS QUESTIONED: Lawmakers are scrutinizing the salary and benefits of University System of Maryland Chancellor Robert L. Caret after the state Board of Regents awarded him a $75,000 bonus a year for his $600,000-a-year job, Fenit Nirappil and Danielle Douglas-Gabriel write in the Post. Although such high compensation isn’t unusual in the world of higher education, state lawmakers are questioning whether the bonus was appropriate, especially in an era of rising and costly college tuition.

REPLACING RASKIN: When state Sen. Jamie Raskin of Takoma Park won a nine-way battle for his party’s nomination in last April’s primary, he immediately became the prohibitive favorite to be the next member of the U.S. House from the heavily Democratic 8th District. Now, local Democratic activists are increasingly focusing on a late fall vote by the 28-member Montgomery County Democratic Central Committee, which will decide who fills the final two years of Raskin’s Senate term. State Dels. David Moon and Will Smith, both from Silver Spring/Takoma Park-based District 20,  appear to be the early frontrunners to succeed Raskin, reports Louis Peck in Bethesda Beat, with a long list of other hopefuls.