HEROIN GRANTS TO 9 JURISDICTIONS: Gov. Larry Hogan announced Monday that the state will distribute $3 million in grants to fight the heroin epidemic in Maryland, but none of it will go to Baltimore — which has accounted for more than a third of the state’s heroin-related overdose deaths in recent years. Michael Dresser of the Sun reports that the city didn’t apply for a share of the money, the governor’s office said. 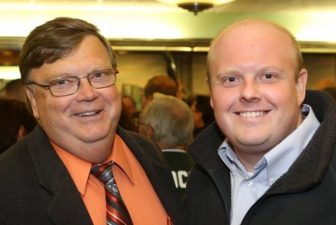 CLUSTER REPLACES CLUSTER: The Baltimore County Central Committee Monday night nominated Joe Cluster, executive director of the Maryland Republican Party, to the House of Delegates, replacing his father, Del. John Cluster, who the governor has appointed to the Parole Commission.

RESPONSE TO ‘THUG’ REMARK: The Hagerstown Herald Mail is reporting that the president of the Washington County Teachers Association said Monday that a Facebook comment by Gov. Larry Hogan’s last week that referred to teachers union officials as “union thugs” is “another hurdle in that battle” to recruit and retain teachers. The tempest erupted Friday when Hogan responded to criticism of his recent decision to save, rather than spend some state funds.

POWER LINE SUSPENDED: An organization that provides electricity to states along the East Coast has decided to suspend its plan to build a power line that will connect Delaware to a nuclear power complex that sits off its shores. The decision comes about a month after Maryland Gov. Larry Hogan (R) and Delaware Gov. Jack Markell (D) announced that they planned to team up to fight the increased rates that some Maryland and Delaware taxpayers were scheduled to pay to cover the cost of the power line, Ovetta Wiggins reports in the Post.

PLANK SHOULD NOT GIVE IN: In an opinion article for MarylandReporter.com, Michael Collins urges Port Covington developer Kevin Plank, CEO of Under Armour, to not knuckle under to the “bribes, kickbacks and Mafia payoffs” of local community activists in Baltimore City.

TRUMP RIGHT ON CRIME RISE: In a piece for the Post Opinion section, Sean Kennedy and Parker Abt write that Donald Trump is indeed correct when he claims that crime is on the rise, and the most recent FBI statistics bear that out.

$15 MINIMUM WAGE: Baltimore’s lowest-paid workers moved one step closer on Monday to earning at least $15 an hour when the City Council gave preliminary approval to raising the minimum wage, reports Yvonne Wenger in the Sun. The council voted 7-4 to back a plan to steadily raise the rate from the state’s current $8.75 minimum through 2022. Three council members abstained and one was absent.

TERM LIMIT PETITIONS IN MO CO: Republican activist Robin Ficker on Monday presented Montgomery County with what he said are 18,000 signatures in support of placing a term-limits measure on the November ballot, Bill Turque reports in the Post. The signatures, spread over 3,600 pages of petitions packed in a box that once held bananas, favor limiting county council members and the county executive to three consecutive terms.