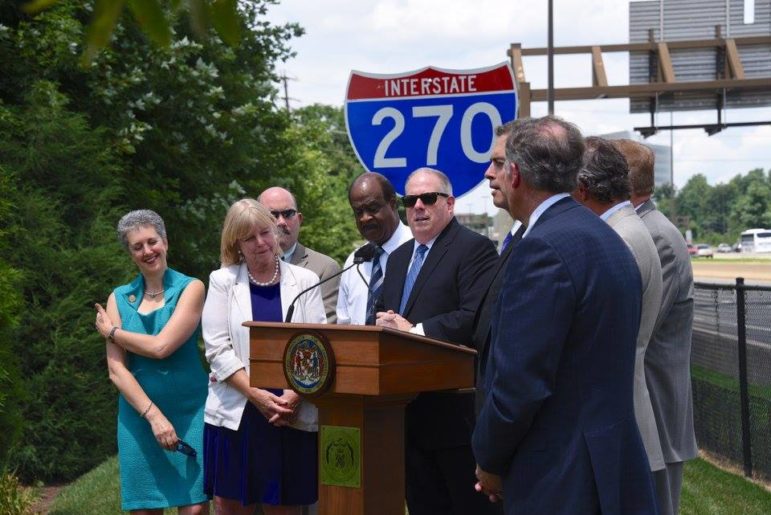 I-270 FUNDS ANNOUNCED: While much of his party gathered in Cleveland for the Republican National Convention, Gov. Larry Hogan journeyed to deep-blue Montgomery County on Monday to announce an additional $100 million in state funding to ease traffic on chronically congested Interstate 270, reports Ovetta Wiggins in the Post. “There’s a convention?” Hogan quipped when asked about his decision not to attend the formal nomination of White House hopeful Donald Trump.

FUNDING SHUTTLE SERVICE TO BOOT: Gov. Larry Hogan brought a smile to the face of one state senator from Montgomery County Monday when he announced the state would fund the cost of the county’s free shuttle bus program that will transport local commuters between stations during Metro’s SafeTrack repairs on the Red Line later this year, Andrew Metcalf reports for Bethesda Beat.

YUMI HOGAN TOURS ART STUDIO: Maryland first lady and artist Yumi Hogan took a tour of Make Studio in Hampden, a place where adult artists with disabilities flock to to develop their skills, try new techniques and connect with other artists. For many of them it is a calm time to delve into their professional artistry, a time they don’t usually have anywhere else, Andrea Cwieka of the Daily Record writes.

ON GERRYMANDERING: In a commentary for MarylandReporter.com, Eli Briody-Pavlik, a 20-year-old college student who considers himself a political progressive, writes in MarylandReporter.com that while the prospect of “continued GOP dominance in the House has me shaking in my boots. I can’t, however, accept the flagrant nature of the gerrymandering that took place in Maryland. … the districts are unfair, and the right thing to do is to redraw them.”

McDONOUGH TOUTS POSSIBLE WIN: Del. Pat McDonough followed his state’s GOP delegation to the Republican National Convention this week in search of donors for his congressional campaign, insisting that this year’s stranger-than-fiction political climate could help him produce one of the biggest election shockers of 2016 — him unseating seven-term incumbent U.S. Rep. Dutch Ruppersberger, Josh Hicks reports for the Post.

MARYLAND AT THE GOP CONVENTION: Josh Magness and Julie Gallagher of CNS report from Cleveland that despite the split in the Republican Party over Trump/Not Trump, many are seeking party unity. “Anne Arundel County Executive Steve Schuh said at the Maryland delegate breakfast Monday morning that Trump was not his first choice in the 2016 Republican primary. However, as a party leader, Schuh said he must accept the GOP voters’ choice, as 60% of them voted for Trump in the state’s April 26 primary.” The article appears in MarylandReporter.com.

BOSSIE, POLITICAL MOVER: David Bossie, the 50-year-old Montgomery County man elected in May to represent Maryland on the Republican National Committee, is chairing the state’s delegation to the RNC, fundraising for GOP candidates and using his thick Rolodex to lure speakers to address the state’s delegates. “He’s one of the most important strategic entrepreneurs in the conservative movement in the entire country,” former House Speaker Newt Gingrich. He’s also head of the Washington-based Citizens United, reports John Fritze for the Sun.

AA COUNCIL TERM EXTENSION PULLED:  Amanda Yeager of the Annapolis Capital reports that a measure to allow a third term for Anne Arundel County Council members will not make it to the ballot. Councilman Pete Smith decided Monday night to withdraw the resolution, which proposed extending the possible tenure of council members from eight years to 12. As a charter change, it would have been passed on to voters to approve or reject if endorsed by the council.