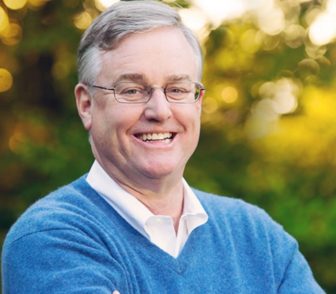 BREAKING: TRONE TO RUN FOR CONGRESS: David Trone will make another run for a seat in Congress. The Potomac Democrat and co-owner of Total Wine & More announced Wednesday morning that he’ll pursue the District 6 seat being vacated by Rep. John Delaney, who is running for president, Andrew Metcalf reports in Bethesda Beat. The bid will be Trone’s second attempt to win a seat in the House of Representatives. Last year, he placed second in the Democratic primary for the District 8 Congressional seat won by Rep. Jamie Raskin. Trone spent more than $13 million of his personal fortune on that race—the most ever by a self-funded House candidate.

MD HEALTH PANEL STYMIED BY FED INACTION: A commission established by the General Assembly to explore Maryland’s options to respond to a possible repeal of Obamacare heard an accounting of the program’s accomplishments in the state Tuesday as well as warnings about the effects of President Donald J. Trump’s efforts to dismantle it. Panel members were told that more than 400,000 people still face the possibility of losing coverage or being charged higher premiums as a result of actions taken or threatened by the Trump administration, reports Michael Dresser in the Sun.

HOGAN SUED OVER FB POST DELETIONS: The American Civil Liberties Union of Maryland filed a federal lawsuit against Gov. Larry Hogan Tuesday, accusing his administration of unconstitutionally censoring constituents’ speech by blocking some Facebook posters and deleting their comments from his official page, reports Luke Broadwater for the Sun.

RX POT PROGRAM REFORM: The editorial board for the Sun opines that amid litigation and controversy, the General Assembly should wait until January to reform Maryland’s medical marijuana program.

JUDGE TOSSES LAST PURPLE LINE ISSUES: U.S. District Court Judge Richard Leon ruled that he will not reconsider the Purple Line’s potential effects on air and noise pollution, after previously deciding the Federal Transit Administration and Maryland properly studied them. In an opinion published Tuesday, Leon wrote that the plaintiffs raised a voluminous number of alleged environmental violations and he ruled against the plaintiffs each time. The exception was for problems related to Metro’s ridership decline and safety issues, which caused Leon to revoke the project’s federal approval in August and later order a new environmental study to examine the issues, reports Andrew Metcalf for Bethesda Beat.

RIGHT ACTION ON VEIP: In an editorial about the Gov. Larry Hogan’s decision to alter the Vehicle Emissions Inspection Program, the editorial board of the Sun writes that when you look specifically at new cars, the failure rate is practically non-existent — about 0.5% for cars that are less than three years old. In that context, it’s not surprising that we have heard no hue and cry from Maryland’s environmental advocates about Gov. Hogan’s proposal to exempt new cars from VEIP tests for the first three years rather than the first two.

TAX-FREE WEEK: Maryland Comptroller Peter Franchot was in Easton Monday promoting the state’s upcoming Shop Maryland Tax-Free Week, which starts Aug. 13 and runs through Aug. 19. Josh Bollinger of the Easton Star Democrat writes that Franchot said called the tax-free week “a big help for families that are purchasing back-to-school clothing, but frankly, it is open to anyone, adults or otherwise” who are shopping.

TRONE TO ANNOUNCE INTENTIONS: David Trone is preparing to make a long-awaited announcement that’s expected to have ramifications for the county’s political scene, Andrew Metcalf of Bethesda Beat reports. Trone told Bethesda Beat on Tuesday that he will announce today which elected office he plans to pursue. He would not say whether he’ll pursue Rep. John Delaney’s 6th District congressional seat or try to become Montgomery County executive — the two offices he’s previously said he’s considering.

JUDGE WON’T STOP VOTER DATA COLLECTION: A federal judge on Tuesday declined to temporarily bar President Trump’s voting commission from collecting voter data from states and the District, saying a federal appeals court likely will be deciding the legality of the request, Spencer Hsu of the Post reports.

TURQUE LEAVES MO CO BEAT: The most feared person in MoCo politics is not an elected official, writes Adam Pangucco for Seventh State blog. He’s not a union leader, a developer, a big contributor or even a blogger.  He’s Washington Post reporter Bill Turque, who has covered the MoCo beat for over four years.  Happily for politicians and unhappily for the rest of us, Turque has stepped down and it’s unclear what the Post will do next, Pagnucco goes on to detail some of the highlights of Turque’s reporting.

$15 MINIMUM TO COST MO CO JOBS: Montgomery County would lose approximately 47,000 jobs by 2022 if it raises the minimum wage to $15 an hour, according to a study released by the county government Tuesday evening, Rachel Chason of the Post reports. County Executive Ike Leggett commissioned the study — which suggests the vast majority of jobs lost would be low-wage positions — when he vetoed an increase to the minimum wage in January.

ANNAPOLIS POLICE CHIEF ON TRUMP SPEECH: Annapolis Police Chief Scott Baker joined criticism of President Donald Trump’s recent comments on police violence Tuesday, saying they “do not help build trust between citizens and police.” Rachael Pacella of the Annapolis Capital reports that Baker made the comment just hours before his department and others around the nation were joining in National Night Out, an effort to improve community and police relations.

HARASSMENT CASE INTERVIEWS COMPLETED: Julie Greene of the Hagerstown HeraldMail reports that interviews have been completed as part of an investigation into a Washington County employee’s sexual-harassment complaint filed against a county commissioner. County Administrator Rob Slocum told Herald-Mail Media on Tuesday that the employee complaint is still being investigated, while a related probe into leaks to the media has been completed. Whether the results of either investigation will be made public is still to be determined, he said.

JUDGE RULES FOR TANEYTOWN COUNCIL: Heather Mongilio of the Carroll County Times reports that after two days of testimony, including from plaintiff Robin Bartlett Frazier, a judge ruled that the Taneytown City Council and mayor did not willfully violate the Maryland Open Meetings Act when it held a closed meeting on June 22, 2016. Frazier played two roles during the two-day trial, questioning witnesses as her own representative, although she does not have a law degree, then taking the stand, where she asked herself questions and answered them as part of the testimony.

MOSSBURG TO SEEK DELANEY’s SEAT: A former Montgomery County delegate who announced a bid to challenge Sen. Ron Young, D-District 3, in 2018, will instead run for congress, reports Danielle Gaines in the Frederick News Post. Mathew Mossburg,
50,  announced the shift on Tuesday, days after U.S. Rep. John Delaney (D-6th) announced he would not seek re-election and would run for president.