STAFF SHORTAGE IN PAROLE & PROBATION: Parole and probation agents in Maryland said Thursday that the state is woefully ill-equipped to deal with the hundreds of nonviolent prisoners who could be released next year under the state’s new criminal-justice reform law. Ovetta Wiggins of the Post reports that union members argued that many agents carry more than 100 ­cases and that the numbers are likely to climb when the new sentencing law goes fully into effect in October 2017.

FANTASY SPORTS REGS: Comptroller Peter Franchot has unveiled rules for the state’s daily fantasy sports industry that he said would protect consumers while ensuring that the game operators — and winners — pay taxes, Josh Hicks reports for the Post. The regulations would ban individuals younger than 18 from joining commercial fantasy leagues, limit participants to $1,000 in monthly deposits to their player accounts, bar game operators from extending credit to members and require the companies to comply with tax laws and notify participants of their potential tax obligations, among other measures.

SAVING THE BAY: The Republican-led House of Representatives has passed an appropriations bill that cuts deeply into Environmental Protection Agency enforcement efforts, including the Chesapeake Bay cleanup plan, Pat Furgurson of the Annapolis Capital reports. The $32-billion bill for the Department of the Interior and EPA curtails funding for much of President Barack Obama’s environmental agenda. It also contained an amendment that prohibits the EPA from spending money to take actions against states that fail to meet pollution standards. All Maryland’s congressmen voted against the amendment, but it ultimately passed and was included in the appropriations bill.

RX POT ACTION AROUND STATE: While medical marijuana, now being called medical cannabis, has been legalized in the state, Carroll County commissioners indicated Thursday that they have no intention of making it easy to distribute the product within county limits. “I want to make it as hard as possible [to sell medical cannabis] until someone gives me directive otherwise or suggests that it shouldn’t be hard,” Commissioner Stephen Wantz said before the board voted Thursday in favor of sending a zoning text amendment related to growing, processing and distributing cannabis to the Planning and Zoning Commission for final approval, Heather Norris writes for the Carroll County Times. 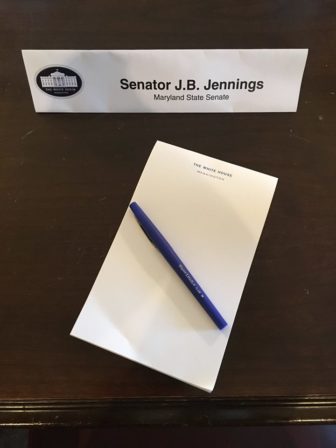 Sen. Jennings’ photo of his name plate at White House conference on his Facebook page.

SCHUH UPBEAT ON AA POLICE-RACE RELATIONS: As national dialogue continues to focus on fraught relations between police and minority communities, Anne Arundel County Executive Steve Schuh says he doesn’t believe there is much of that tension locally, writes Amanda Yeager for the Annapolis Capital. “Anne Arundel County is a very different place from some of the other jurisdictions you see around the country, where there is so much tension and distrust between those local communities and law enforcement,” Schuh told Tom Hall, the host of Maryland Morning on WYPR-FM. “We don’t have that in Anne Arundel County.”

DELAUTER ENCOURAGES SUIT AGAINST FREDERICK: In Danielle Gaines Political Notes column for the Frederick News Post, we learn that Frederick County Councilman Kirby Delauter has encouraged a local business to file a lawsuit against the county — and he volunteered to testify against the county if a case is filed. Also, U.S. Senate candidate Kathy Szeliga also won’t be headed to Cleveland with some party colleagues for the Republican National Convention next week. Szeliga and Gov. Larry Hogan are scheduled to host a roundtable with Maryland veterans in Annapolis on Tuesday, then hold a press conference.