GOV’T WORKER/LOBBYISTS: A political strategist hired as an assistant state’s attorney is now registered as a lobbyist in Anne Arundel County — earning a salary from the same administration he has the potential to influence, writes Rema Rahman of the Annapolis Capital. He’s not the only one. The attorney appointed by the county’s Board of License Commissioners is also on the list.

OIL DISASTER READINESS: Previously confidential information about crude-oil transportation on rail lines in Maryland has shed light on a route that extends beyond the state, specifically into the Eastern Panhandle of West Virginia, CJ Lovelace reports for the Hagerstown Herald Mail. That route travels through populated areas, including the middle of Martinsburg, W.Va. And while some emergency responders queried in the Tri-State said they were ready, others said they didn’t have a plan in place should one of those trains spill their cargo.

REDISTRICTING REFORM? FUHGEDDABOUDIT: Political prognosticator Barry Rascovar, writing in MarylandReporter.com, predicts that, “Good intentions and wishful thinking will not get advocates of redistricting reform very far. They fail to grasp that the process is 100% political. The sweeping changes they seek won’t happen. Reporters, editors and editorialists are strongly on the side of the reformers. So are political science academics and supporters of ‘good government.’ None of that matters one iota.”

MALLOWS BAY SANCTUARY: The federal government is moving forward with a plan to create a national marine sanctuary at Mallows Bay in Charles County — the site of the largest collection of historic shipwrecks in the nation — President Barack Obama will announce today. John Fritze of the Sun writes that the  14-square mile area of the tidal Potomac River holds the remains of nearly 200 vessels, including Revolutionary War ships and the “Ghost Fleet” of World War I wooden steamships that were scuttled there after the war.

HOGAN FINDS CAMARADERIE: Andrew Oberle didn’t mean to make the governor cry, writes Erin Cox in the Sun. It was just that Andrew started chemotherapy a year ago, when he was 4, and he thought Gov. Larry Hogan could use a list of tips about how to get through it. So he handed the governor, bald like Andrew from the chemo drugs, a cheat sheet at a cancer awareness event. Hogan read aloud with a flourish.

OBAMA HONORS FIREFIGHTERS: Jeff Barker reports in the Sun that Brenda Pridgen dabbed away another tear as she composed herself to meet President Barack Obama, an encounter that elicited a rush of conflicting emotions for the widow of Baltimore firefighter James E. Bethea. “My husband would have loved this,” Pridgen said of Sunday’s memorial service at Mount St. Mary’s University for 87 firefighters — including Bethea and Baltimore County firefighter Robert W. Fogle III — who died on the job. 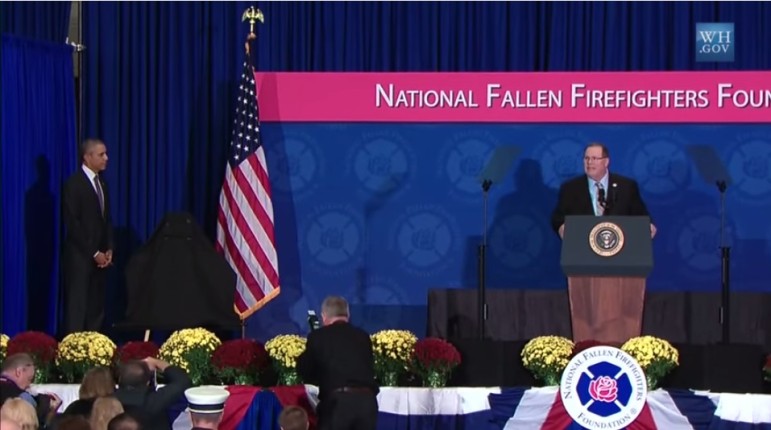 COUNTIES WORK TOGETHER: Sheilah Kast of WYPR-FM speaks with Baltimore County Executive Kevin Kamenetz about teaming up with Montgomery County to share information technology ideas and how to handle it better.

CUBA-ARUNDEL RELATIONS: Christina Jedra of the Annapolis Capital writes that Anne Arundel County Executive Steve Schuh said he returned from a three-day trip to Havana with a foundation for Arundel-Cuban relations — and some Cuban cigars. After taking the inaugural charter flight to Havana from BWI Thurgood Marshall Airport on Wednesday, Schuh and others in a local delegation met with U.S. Ambassador Jeffrey DeLaurentis and local hospitality business leaders.

MAYORS PUSH AGENDA: Mental health, mass shootings, infrastructure and police safety and accountability are among the most pressing issues that need to be addressed by the presidential candidates, according to a nonpartisan group of mayors led by Baltimore’s Stephanie Rawlings-Blake. John-John Williams of the Sun quotes Rawlings-Blake: “We aren’t asking our candidates to do something we aren’t willing to do ourselves.” She was surrounded at the news conference by about 20 mayors, including New York’s Bill de Blasio, Atlanta’s Kasim Reed and Washington’s Muriel Bowser.

O’MALLEY ON GUN CONTROL, FINANCE REFORM: Former Gov. Martin O’Malley on Sunday touted a package of gun-control measures passed during his tenure and challenged his two leading rivals for the Democratic presidential nomination to embrace several initiatives on the national level. O’Malley’s comments, in the wake of last week’s deadly shootings at a community college in Oregon, represented his latest attempt to gain traction in a race where he lags well behind Hillary Rodham Clinton and Sen. Bernie Sanders, reports John Fritze for the Sun.

NEW CARROLL ELECTIONS CHIEF: Katherine Berry, Carroll County’s new election director, was elected by her peers across the state to the board of directors for the Maryland Association of Election Officials. In 2014, she began to co-chair the Legislative Committee providing verbal and written testimony on election-related bills during the Maryland General Assembly’s legislative sessions. The Carroll County Board of Elections recently announced her appointment. The Carroll County Times talks with Berry about her new role.