LIFE-TIME FISHING BAN: Two Eastern Shore watermen convicted last year of a large poaching scheme have received lifetime bans from the striped bass fishery by the Maryland Department of Natural Resources. State officials said they were not aware of a lifetime ban being imposed in the striped bass fishery before this case, Catherine Rentz reports for the Annapolis Capital.

NEW LAWS: Here’s a photo gallery of new laws that will take effect in Maryland on Friday, July 1, courtesy of AP and running in the Carroll County Times. They include a hike in the minimum wage and a hike in the state’s gas tax. 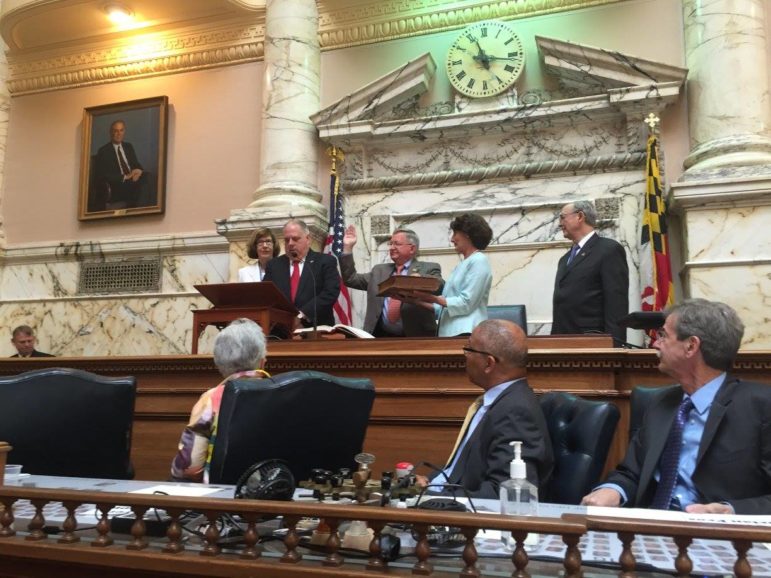 GETTY SWORN IN AS JUDGE: Joseph M. Getty, who has served in two branches of Maryland government, joined the third branch of state government Monday when he was sworn in as a judge on Maryland’s highest court, writes Ovetta Wiggins in the Post.

DON’T COUNT BENTLEY OUT YET: Former U.S. Rep. Helen Delich Bentley is not going gentle into that good night. Bentley, 92, issued a news release Monday insisting that “rumors of my imminent demise are greatly exaggerated,” writes Michael Dresser in the Sun. “Dammit, I’m still right here,” the statement quotes her. “I’m getting back up to speed. My appetite is back. Next comes my energy. What else do you want?”

BUSCH, HOGAN AND CHINKS IN THE ARMOR: Josh Kurtz of Center Maryland enjoys an affable breakfast with House Speaker Michael Busch and comes away with some interesting observations. Busch sees chinks in Hogan’s armor that the Democrats will eventually be able to take advantage of. Hogan, he argues, had to be led “kicking and screaming” into fully funding education and a new hospital in Prince George’s County and to embrace an aid package for Baltimore city.

INCORPORATED CROSSROADS: Maryland’s incorporated subdivisions could be at a crossroads with their individual fates decided, in part, on how each chooses to redevelop and revitalize their respective downtown main street areas. That was the message delivered by Parris N. Glendening at the Maryland Municipal League conference to officials representing 157 incorporated subdivisions that are part of nearly every county in the state, writes Bryan Sears for the Daily Record.

SAVING TERRAPINS: Throughout the Chesapeake and coastal bays, crab pot buoys can be seen floating at the water’s surface. Unfortunately, crabs are not the only bay inhabitant caught by these pots. Diamondback terrapins and blue crabs enjoy eating many of the same food sources, columnist Katherine Phillips of the Salisbury Daily Times opines. Due to this shared interest in food, terrapins are often lured into crab pots by the bait meant for crabs. Checking pots several times a day — and removing them from the water when not in use — will help reduce the number of terrapins killed in these crab pots. Additionally, recreational pots are required to be equipped with a by-catch reduction device, otherwise known as a turtle excluder device.

OPEN MEETINGS COMPLAINT IN HOWARD: In filing a complaint against the Howard County school board with the state Open Meetings Compliance Board, Craig O’Donnell was focused on the body’s handling of Superintendent Renee Foose’s contract renewal in closed meetings, writes Lisa Philip in the Howard County Times. The Dover Post web editor who advocates for open governance in his spare time had read Howard County Times coverage of the January vote and “saw an issue there,” he said.

TERM LIMITS IN MOCO: As supporters of term limits for Montgomery County elected officials hit the streets on Saturday, one of the County Council members who would be affected if the measure passes labeled the effort “a dumb, unnecessary protest gesture” and compared it to last week’s “Brexit” vote. If the question goes on the ballot and a majority of Montgomery County voters vote in favor of term limits, the county executive and County Council members would be restricted to three consecutive terms, writes Aaron Kraut for Bethesda Beat.