SAVINGS FOR DISABLED: Starting in fall 2017, Maryland will offer a new savings account that allows people with disabilities to set aside money without losing eligibility for benefits, Pamela Wood reports for the Sun. A law passed in this year’s General Assembly session will allow families and disabled people to set aside up to $14,000 a year — up to $100,000 total — without affecting eligibility for Supplemental Security Income, Medicaid and other government programs. Officials say an estimated 30,000 to 50,000 Marylanders may be eligible to save. 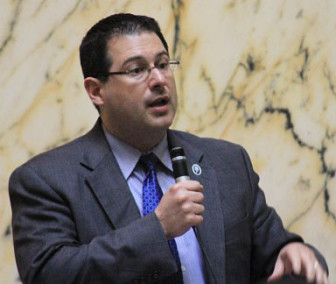 MTA CANCELS BRIEFINGS: Baltimore-area lawmakers expressed dismay Monday after the Maryland Transit Administration canceled a series of briefings for them on plans for a sweeping overhaul of Baltimore’s bus routes, Michael Dresser reports in the Sun. The legislators had been hoping for an advance look at a revised version of Gov. Larry Hogan’s $135 million reconfiguration of the region’s routes before its expected unveiling last month.

TRANSGENDER IN COURTHOUSES: The Office of the Chief Clerk of the District Court of Maryland recently sent a memorandum to all employees reminding them about the state’s transgender laws that govern the use of public restrooms, Dan Dearth reports for the Hagerstown Herald Mail. The memorandum was distributed last week to reiterate the existing 2014 law after district court employees were asked questions by visitors about the restroom policy for transgender people in courthouses across the state. Del. Neil Parrott said he believes the law, which allows people to use the restroom they identify with regardless of their gender, could give pedophiles and rapists access to restrooms of the opposite sex.

EX-MSP SGT SUES: A former Maryland State Police sergeant has filed a federal lawsuit against the agency, alleging she lost benefits when she was forced to retire early after complaining of gender discrimination and harassment, Lauren Kirkwood of the Daily Record writes.

REASONS TO DISLIKE HOGAN: The editorial board for the Frederick News Post opines that Gov. Hogan’s decision to not vote for Donald Trump for president will probably win him few friends among Maryland’s Republican Party loyalists, who bristle that the governor is so publicly distancing himself from Trump. These voters might claim they’ll turn their back on Hogan because he turned his back on Trump. But they already aren’t happy that Hogan hasn’t tried to turn back Gov. Martin O’Malley’s gun control legislation; they have their reasons lined up for turning their back on Hogan.

HARRIS LEADS ON POT RESEARCH: Two years after Rep. Andy Harris put himself in the center of a controversy over legalizing marijuana in the nation’s capital, the conservative Republican is emerging as a leading voice advocating for more research into the drug’s medicinal value, writes John Fritze for the Sun. Harris, a Johns Hopkins-trained anesthesiologist, has been working for roughly a year to build a bipartisan coalition of lawmakers who want to ease restrictions on marijuana for the purpose of studying its effect on debilitating diseases.

GUN CONTROL ISSUES: Gun control supporters and opponents alike in Maryland are reacting to an announcement by the U.S. Supreme Court that the Court will not hear an appeal of a Connecticut law that bans semi-automatic rifles with large magazine clips, reports WBFF-TV’s John Rydell.

KEEP CIVIL RIGHTS: Sen. Steve Waugh, a Republican who represents St. Mary’s and Calvert counties, writes in an opinion piece in MarylandReporter.com that  three days after the attack in Orlando that killed 49 people at a nightclub, goes after both the President Obama and the New York Times in their responses, saying that Obama lacked leadership and the Times blamed the GOP instead of the real culprit — ISIS.

LONGEVITY FOR A POLITICAL APPOINTMENT: Quietly, Maryland’s Rod Rosenstein has become the longest-serving of the nation’s 94 current U.S. attorneys, writes political observer Josh Kurtz for Center Maryland. The quiet part isn’t surprising: That’s Rosenstein’s customary way of doing things. But the longevity is because of the politics that usually surround the appointments of the country’s top prosecutors. U.S. attorney is a plum political appointment – and ambitious lawyers are always lining up for consideration and beseeching a state’s U.S. senators to float their name to the president.

CARROLL COMMISSIONERS, BRINKLEY MEET ON BUDGET: The Carroll County Board of Commissioners and members of the Carroll legislative delegation met Monday afternoon with Maryland Secretary of Budget and Management David Brinkley to discuss funding challenges facing the county, including education and public safety issues, John Kelvey reports for the Carroll County Times.

MO CO CONTRACT WORKERS GET PAY: Workers shortchanged by companies under contract with Montgomery County for cleaning and other services have received over $300,000 in unpaid wages, county officials announced late last week. About a third of the money came from the settlement of a lawsuit filed against the county by some of the workers and one of the contractors, Bill Turque reports in the Post.

DELANEY IN LEAD, POLL FINDS: Incumbent U.S. Rep. John Delaney holds a double-digit lead over his Republican challenger in Maryland’s 6th Congressional District, according to a poll released Monday that was paid for by the state’s leading gun control advocacy group. John Fritze of the Sun writes that at a time when Washington is debating whether to offer a legislative response to the June 12 shooting at an Orlando nightclub, the poll found a federal licensing proposal touted by the group that funded the survey is popular, including in Western Maryland, a Republican stronghold.