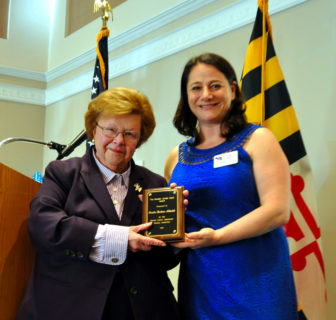 The Howard County Democratic Unity Dinner is the new name Howard Democrats chose for their annual dinner, jettisoning the longstanding Jefferson-Jackson moniker because the names of the two wealthy slave-holding presidents “no longer reflect the inclusiveness and values” they hold, the party chair said.

But the unity dinner did find a new party unifier in the form of another wealthy man with dim view of other races  — Donald Trump.

Sen. Barbara Mikulski was the first of several speakers to mention Trump to boos from the 350 people at the dinner in Clarksville at the edge of Columbia.

As Clinton clinched the nomination Tuesday, it was a special night for Mikulski, who is retiring after 30 years in the Senate and 10 in the House, the longest any woman has ever served in Congress. She was a friend and ally of Clinton in the Senate, and she was proud to see her become the first woman nominated for president by a major party. (The Green Party’s candidate for president, Jill Stein, was on many state ballots in 2012, including Maryland’s.)

Mikulski was an early supporter of Hillary Clinton for president, campaigning for her in 2008 against Barack Obama and again in this campaign. She contrasted Clinton with Trump on multiple issues — equal pay for equal work, college affordability and jobs, jobs, jobs.

“It will be not only about gender, it’ll be about an agenda, a Democratic agenda,” Mikulski said. Clinton will not only work on “macro issues, she also will work on macaroni and cheese issues” that affect working families.

But like other members of Congress who spoke at the dinner, Mikulski also gave a hat tip to Vermont Sen. Bernie Sanders and his campaign supporters. “They brought an energy and vitality to the process,” said Mikulski, as well as bringing young people into the campaign. But “the rules are the rules.”

Mikulski also strongly urged the crowd to support Chris Van Hollen to succeed her in the Senate. “I’m an enthusiastic supporter of Chris,” she said. “He will make a fabulous partner to [Sen.] Ben Cardin.”

“We know the Democrats are going to come together,” while acknowledging “the power of the Sanders campaign,” said Rep. John Sarbanes. 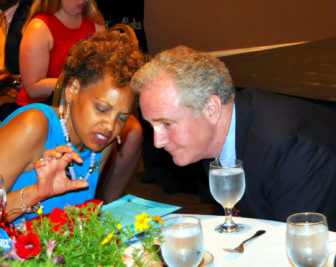 Referring to Trump as Humpty Dumpty, Sarbanes said, “All the kings horses and all the kings men are not going to put the Republican Party back together again.”

“He can’t control himself,” Sarbanes said.

Van Hollen finally made it to the event (all the members were rushing to the dinner from Washington), urging the Democrats to “take nothing for granted,” including his election.

“Here in Maryland in 2014 we had the biggest upset in the nation,” said Van Hollen, obliquely referring to the victory of GOP Gov. Larry Hogan. “We’re not going to let that happen in 2016.” 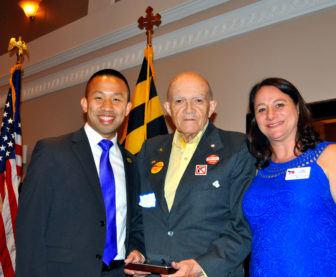 He tried to stir up the crowd with reference to Citizens United, the Supreme Court decision allowing corporations and wealthy donors to spend unlimited money on campaigns without disclosure.

“The head of Citizens United had a fundraiser for my opponent,” said Van Hollen. He was referring to David Bossie who took his organization’s case to the Supreme Court. Bossie was elected last month as the Republican National Committeeman for Maryland and sponsored a fundraiser for Republican Senate nominee Kathy Szeliga. 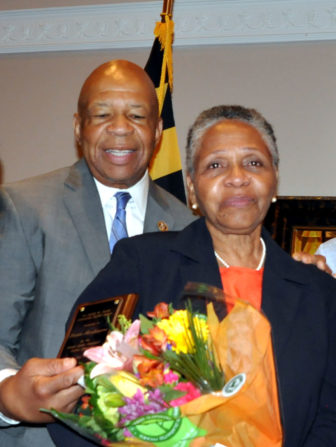 Rep. Elijah Cummings, often the clean-up speaker at these events because of his impassioned rhetoric, chose to use it to praise the winner of the last of the awards, this one the James Rouse Community Builder Award going to NAACP youth leader Bessie Bordenave.

Cummings made no mention of national politics, nor the major role just given him to help unify Clinton and Sanders supporters as chairman of the party platform committee.

As is usual at a political dinner, the next election was always top of mind.

Glen Middleton, executive director of AFSCME Council 67, had his picture taken with Howard County Council chair Calvin Ball, whom Middleton referred to as the next Howard County executive. “We need someone with his values supporting working families,” said Middleton, a 19-year member of the Democratic National Committee.
And there were dueling ads in the program (below) by Comptroller Peter Franchot and Sen. Jim Rosapepe, who is exploring running against Franchot in 2018. Some Democrats are unhappy with Franchot’s frequent support of Hogan on the Board of Public Works. 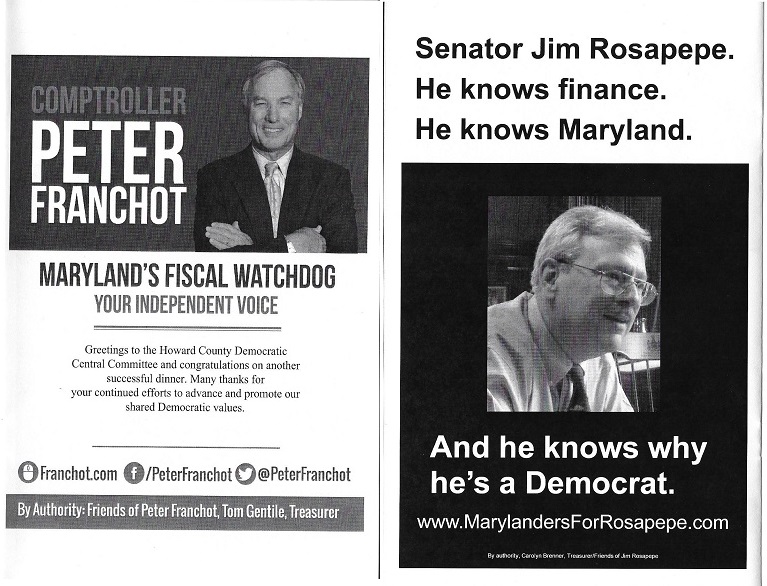