The first place cartoon was drawn by Matthew Kurdt, a Frederick native studying art and design at Frostburg State University.

A coalition of groups against gerrymandering is hoping laughter will be the best medicine for redistricting concerns.

The winning cartoon was drawn by Matthew Kurdt, a Frederick native who is studying art and design at Frostburg State University.

The cartoon depicts a Maryland flag with irregular and loopy lines instead of straight ones. The caption says “New Flag Proposal, Who cares how the lines are drawn … right?”

“These winning entries captured the essence of political cartoons.  We are using humor to draw attention to a very serious issue,” Carol Ann Hecht, representing the National Council of Jewish Women Annapolis Section, said in a press release.

The council is one of three organizations leading the “Tame the Gerrymander” effort – the other two are Common Cause Maryland and the League of Women Voters.

“Gerrymandered districts create situations where all votes are not equal,” Hecht said. “They also make it difficult for legislators to know and represent their constituents, and undermine confidence in the democratic process. Marylanders deserve better.”

Jennifer Bevan-Dangel, executive director of Common Cause Maryland, said that the effort wants the legislature will act to reform the redistricting process.

“The legislature had a dozen bills to choose from this session, from the easiest step of convening a task force to recommend changes to actually establishing a new, independent process to draw our district lines,” she said. “Yet the General Assembly failed to take action on any of them.”

The contest was open to Maryland students in high school or college, or out-of-state student attending a Maryland college. The cartoons were judged on their incorporation of both artistic quality and political satire.

Len Lazarick, editor and publisher of MarylandReporter.com, was one of the judges.

How other states broadcast legislative sessions 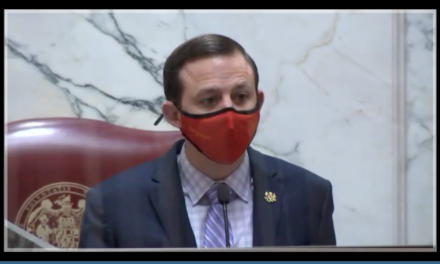