STEPPING BACK FROM POLLUTION SOLUTIONS: Republican Gov. Larry Hogan’s pledge to cut taxes and fees has spurred his administration to step back from two of Maryland’s main efforts to clear the air of pollution, reports Scott Dance in the Sun. In the face of efforts by environmentalists, consumer advocates and utilities, the administration is opposing plans to expand an initiative that encourages state residents and businesses to use less electricity. And the governor vetoed a bill that sought to increase Maryland’s use of renewable energy sources.

LARGER HOSPITAL RATE RISE SOUGHT: Maryland hospitals want health regulators to approve a larger increase in hospital rates than the one proposed by state health staff when they vote today on rates for the next fiscal year, Meredith Cohn reports in the Sun. Rates for hospitals in Maryland are tightly managed as part of a unique agreement the state has with the federal government to control health-care spending.

GAS TAX REVENUES DROP: Revenues from a gas tax passed in 2013 are projected to be 26% lower than expected, and legislative analysts say the culprit is lower-than-expected gas prices since the law took effect nearly three years ago, Bryan Sears reports for the Daily Record.

BIOSCIENCES IN MARYLAND: Daniel Leaderman of the Daily Record reports that an industry report says that Maryland’s bioscience industry remains a top recipient of government funding, academic research dollars and venture capital investment, but the field has been growing at a slower pace than in the rest of the of the country.

BLASTING GOP ATTACK ON WOMEN: In an op-ed for the Sun, U.S. Reps. Steny Hoyer and Chris Van Hollen write about the Republicans’ attack on women’s access to health care and how rhetoric has ended with murders and arsons at clinics. They opine, “Having failed to learn from the very real and very dangerous consequences of extreme rhetoric and the publication of names and personal information of those who provide reproductive care services, House Republicans are now placing other health care practitioners, researchers, patients and first responders in danger — this time in our home state of Maryland.” 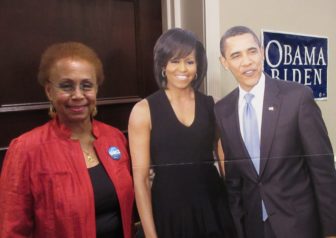 In a spirited auction at the Howard County dinner, Dr. Carlessia Hussein won this life-size cut-out of Michelle and Barack Hussein Obama. A cutout of Vice President Joe Biden fetched only $105, Photo by Len Lazarick, MarylandReporter.com.

TRUMP A DEM UNIFIER: Len Lazarick of MarylandReporter.com writes about the Howard County Democratic Unity Dinner, which is the new name Howard Democrats chose for their annual dinner, jettisoning the longstanding Jefferson-Jackson moniker because the names of the two wealthy slave-holding presidents “no longer reflect the inclusiveness and values” they hold, according to its party chair. But the unity dinner did find a new party unifier in the form of another wealthy man with a dim view of other races  — Donald Trump.

OTIS ATTACKED FOR LEAVING GOP: Leaders in three Frederick County Republican groups are calling County Council President Bud Otis a “bait-and-switch” candidate and want him to resign, weeks after Otis announced he was leaving the party to become an unaffiliated voter. Otis announced on May 19 that he was leaving the party in response to “outrageous, mean-spirited” attacks by county leaders of the party to which he formerly belonged, Danielle Gaines reports in the Frederick News Post.

FREDERICK CO. CHARTER CHANGES: Of more than 20 proposed changes to the Frederick County Charter, only three passed muster with the County Council on Tuesday, Danielle Gaines writes in the Frederick News Post. The council supported proposed amendments to change the public notice procedures for council amendments to bills and to the county budget. The council also voted to extend its timeline for passing the county’s annual budget by about a week.

BALTIMORE CITY GOV’T SHUTDOWN? Fraser Smith and Luke Broadwater, of the Baltimore Sun’s City Hall bureau, talk about the possibility of a Baltimore City government shutdown if city council members don’t get what they want.