A purchase order document provided by the City of Annapolis in response to a Public Information Act request by the Capital News Service. It is redacted as "confidential commercial information."

This is Part Two of “Tracking Your Phone,” an investigation by the Capitol News Service into secretive cell phone tracking technology. In the first installment, it detailed how Deon Batty was targeted, seemingly out of nowhere, by police in an armed robbery case, and police found the cell phone of the 77-year-old victim on him. Read more about his public defender’s quest for more information, and a larger investigation into the technology. 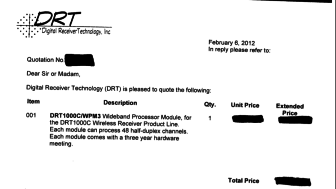 A purchase order document provided by the City of Annapolis in response to a Public Information Act request by the Capital News Service. It is redacted as “confidential commercial information.”

When public defender Janine Meckler sought more information during a hearing in Baltimore City Circuit Court about how police knew her client Deon Batty was carrying a stolen cell phone, the assistant state’s attorney asked the judge to bar her from asking for more details about it.

“That’s when I knew I had something,” Meckler said of the September 2014 case.

The state’s attorney’s attempt to stop Meckler is similar to reasons given by police departments to deny CNS’ requests for information under the law: Secrecy necessary to conceal details of the technology from criminals that would allow them to skirt capture.

In some cases, the FBI has required local agencies to sign confidentiality agreements prohibiting them from disclosing even whether they are using the devices.

Although some Maryland agencies have been using cell phone tracking technology like the StingRay cell simulator for at least a decade, it wasn’t until October 2014 that police in the state were required even to show probable cause to use real-time cell site location information, according to a four-month investigation by Capital News Service.

The CNS investigation also found that police agencies in the seven counties closest to the Washington and Baltimore regions have spent at least $2.8 million on the sophisticated equipment.

At least 61 police agencies in 23 states and Washington, D.C., have deployed cell site simulators, according to the American Civil Liberties Union, which has pushed for greater oversight laws and transparency over how police use the technology.

“I would say that this shouldn’t ever be a secret,” David Rocah, senior staff attorney at ACLU of Maryland, said. “We’re not talking about catching spies. We’re talking about routine criminal investigations.”

Use is widespread in Maryland jurisdictions

–Heavily redacted records show Montgomery County Police, which obtained its equipment a decade ago, paid $260,944 in 2011 to continue its use. The county has paid an additional $222,961 since then, some of it for “upgrades/enhancements.”

–Anne Arundel County has spent more than $151,000 on its cell site simulator and maintenance agreement since 2013, according to purchase orders and other public records.

–The Prince George’s County Sheriff’s Office received a $327,000 Justice Department grant in 2009 to buy its cell site simulator system. Within a month of installing it in a vehicle in December 2010, the agency had already used it five times and captured four suspects in cases that included an armed robbery, a carjacking and three attempted murders.

The FBI “believes that this technology is a vital tool in homeland security operations and disclosure of this technology could expose ways to subvert this investigative tool to terrorists and criminals alike,” Baltimore County Police Cpl. Shawn Vinson wrote in a response to a CNS request for information.

Non-disclosure agreements signed by some agencies and the FBI direct local police to contact the bureau so it has the opportunity to intervene to stop public disclosures about cell site simulators.

That explains why Maryland State Police Sgt. Thomas Bonin told then-state Sen. Christopher Shank during a March 2014 hearing that he could not comment on whether or not the agency owns a StingRay, the name of the most commonly used simulator.

Maryland State Police signed its agreement with the FBI, which it released to CNS, on Feb. 12, 2012.

“Is it classified?” Shank asked during the hearing.

“It is classified,” Bonin said.

Secrecy even surrounds the non-disclosure agreements. The FBI won’t say how many such agreements it has signed with local jurisdictions.

FBI Spokesman Christopher Allen said the non-disclosures aren’t meant to prevent all discussion about the devices. The FBI doesn’t tell local police how they can use their devices either, he said.

“The goal is to protect the tradecraft capabilities of the device … with the idea of preventing countermeasures,” Allen said.

Coming Wednesday, Part Three of “Tracking Your Phone” reveals prosecutors have sometimes offered plea bargains rather than disclose information on cell site simulator use in court.

Early birds are first to file for 2014; Nathan-Pulliam to challenge Jones-Rodwell for Senate