EXPANDED HEALTH COVERAGE FOR WOMEN: Pamela Wood of the Sun reports that Gov. Larry Hogan is expected to sign into law today what advocates say will place the state at the forefront of efforts to require insurance plans to offer birth control at no out-of-pocket cost, expanding access to women and men who want to prevent unwanted pregnancies. The law won’t go into effect until Jan. 1, 2018 and will apply only to insurance companies regulated by the state of Maryland.

MORE SECURE ID: Making a fake Maryland ID is about to get harder, Colin Campbell reports in the Sun. The state Motor Vehicle Administration, looking to guard against identity theft and counterfeiting, has announced a $3.5 million redesign of its driver’s license and identification cards, its first since 2003. The new cards, unveiled Monday, feature a range of security measures. “This card is the most secure driver’s license in the United States today,” state Transportation Secretary Pete Rahn said.

PART 2: TOP SECRET TECHNOLOGY: In Part 2 of the CNS series on battlefield technology that local police departments  are using to track cell phones, Courtney Mabeus discovers that finding out about the technology isn’t easy for reporters — nor for the attorneys trying to defend their clients.

TAKING A GAP YEAR: Del. Shelly Hettleman, in an op-ed for the Sun, writes that taking a year off between high school and college can benefit both the student and the community, “which is why Sen. Bill Ferguson and I introduced legislation to create an innovative gap year program in Maryland. Maryland Corps (HB 1488/SB 909) would enable student participants to dedicate a year of service to a non-profit organization or government agency and receive both a stipend to offset their expenses and an educational scholarship. The legislation was passed in the General Assembly and is awaiting the governor’s signature.”

TALBOT VIOLATED OPEN MEETINGS LAW: The ACLU of Maryland is announcing that the Maryland Open Meetings Compliance Board, in response to a February complaint filed by the ACLU-MD and the Talbot County Branch of the NAACP, has ruled that the Talbot County Council violated Maryland’s Open Meetings Act when it held closed-door sessions to discuss and vote upon an NAACP request to remove the “Talbot Boys” Confederate monument from the courthouse lawn in Easton.  Here’s a copy of the decision.

SUIT FILED OVER NEW SCHOOL BOARD LAW: A power struggle over control of the body that screens candidates for the Anne Arundel County Board of Education is headed to court.  Four members of the School Board Nominating Commission have filed an appeal in Anne Arundel County Circuit Court asking for a ruling on the constitutionality of a new law that would remove them and one other member at the end of May. Democrats in the Maryland General Assembly passed the contentious measure in March and last month overrode Republican Gov. Larry Hogan’s ensuing veto, Amanda Yeager of the Annapolis Capital reports.

TOP 10 NEWBIE DELEGATES: Their ages range from 33 to 55, they are from every part of the state although three are from Baltimore City, two are Republicans and eight are Democrats, seven are men, three are women and four are African American. These are the 10 promising freshmen among 60 in the House of Delegates that Josh Kurtz is focusing in on in his latest column for Center Maryland.

DUMPING JEFFERSON & JACKSON? A national trend to pivot away from the slave-owning legacies of two founders of the Democratic Party, Thomas Jefferson and Andrew Jackson, has made its way to the Democratic Central Committee of Howard County, Fatimah Waseem writes in the Howard County Times.

ON D.C. METRO: Jeff Salkin of MPT interviews D.C. Metro General Manager Paul Wiedefeld, who acknowledged there has been a loss of confidence in the agency. He said he is holding a first-ever meeting of all 650 managers today in Montgomery County, and took viewer questions as well. 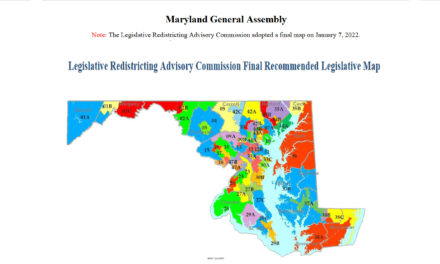