An excavator stands shadows of the Patapsco River bank where it’s been used to drill holes in Bloede Dam for placing explosive charges. Officials plan to breach one end of the dam, then use heavy equipment to dismantle the middle portion. Photo by Timothy Wheeler, Bay Journal.

If it ever stops raining, one of the biggest remaining barriers to fish migration in the Chesapeake Bay watershed will finally come down.

Bloede Dam, a long-dormant hydroelectric facility near Baltimore, is supposed to be breached with explosives any day now, the first major step toward opening up Maryland’s Patapsco River to river herring, shad and eels.

Preparatory work has been under way since last September to remove the 111-year-old structure. The initial blast to begin the work had been planned to take place about a week ago, but the demolition has been delayed by rain-fed high river flows and unrelated technical problems drilling holes for the charges into the steel-reinforced concrete.

Undeterred, federal and state officials and environmental advocates opted to go ahead Wednesday with a previously planned press conference to celebrate the dam’s pending removal.

“This is the look and feel of progress,” said Ben Grumbles, secretary of the Maryland Department of the Environment, as water poured over the dam behind him. A crane with a long drill bit aimed at the dam sat quietly on the opposite bank.

There are nearly 500 dams in Maryland, and Bloede is – or was – one of a handful of hydroelectric power plants in the state, the largest of which is Conowingo on the lower Susquehanna River.

Reputed to be the first hydroelectric facility built with the turbines installed in the wall of the dam, Bloede has limited the access of spawning fish to the lower nine miles of the Patapsco since it was completed in 1907.

There was a similar celebration at the dam when it began generating power for the surrounding area over a century ago, recalled Stuart Levenbach, chief of staff of the National Oceanic and Atmospheric Administration. The daughter of the dam’s owner served waffles cooked on a waffle iron powered by the facility’s electricity, he said. Within about 20 years, though, the dam became obsolete. It hasn’t produced a kilowatt in decades.

Even so, the dam has been a popular feature in the heavily used Patapsco Valley State Park — and despite signs warning visitors to stay off the dam, nine fatalities have occurred there since the 1980s, according to a spokesman for the state Department of Natural Resources. If the dam were left in place, state officials estimated they’d need to spend at least $1 million in repairs to keep it from deteriorating.

A fish ladder installed in the 1990s proved ineffective at getting fish upriver past the 34-foot-high barrier, so officials ultimately concluded the only way to restore spawning runs was to open up the river. Two smaller dams upriver have already come down — Simkins in 2010 and Union in 2011.

“This has been a long time coming,” acknowledged Joanne Throwe, deputy DNR secretary. “This is about improved safety, improving habitat [and] ecological restoration.”

Serena McClain, chief of river restoration for American Rivers, said the group first broached the idea of removing Bloede in 2006, with planning in earnest beginning around 2011. Rounding up funding to cover the $17.3 million cost has been a challenge, so the project is being underwritten by a variety of federal and state agencies, nonprofits and a couple of corporate entities, the Coca-Cola Foundation and Keurig Green Mountain.

The removal will restore 65 miles of spawning habitat for anadromous fish, which spend most of their lives in the Atlantic Ocean but return to fresh water to reproduce. The fish are waiting to get upriver. Biologists in recent years have tallied hundreds of migratory river herring — alewives and blueback herring — and several dozen American shadshowing up just below the dam. 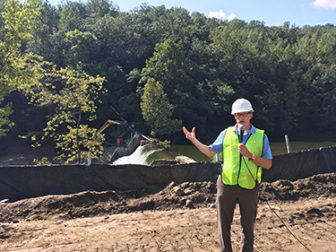 Ben Grumbles, Maryland’s secretary of the environment, said during a press conference that preparations for the removal of Bloede Dam on the Patapsco River give the site “the look and feel of progress.” Photo by Timothy B. Wheeler.

Bloede’s demise will also open up more than 180 miles of habitat for American eels, stretching far up the Patapsco’s headwaters. Eels spawn in the ocean but spend most of their lives in fresh water, and state officials are hoping that getting more eels upriver will also help restore freshwater musselsthat once thrived there. Mussels, like oysters, help to filter pollution from the water, and eels carry mussel larvae, called glochidia, in their gills. The DNR has begun transplanting Eastern elliptio mussels from Deer Creek in the Susquehanna River watershed to the upper Patapsco in hopes of jump-starting that process.

The fish ladder has already been removed. Completing the dam’s removal is expected to take several months. The initial blast is intended to open up one end of the dam, drawing the river’s flow through that breach so that heavy equipment can move in to break up and take out the rest. But for safety reasons, officials are waiting for the river flow to subside before getting under way.

“We wouldn’t like our crews working in flood conditions,” said Brad Gribble, project manager for Kiewit, the Nebraska-based company handling the dam removal. He said he expected everything to be ready sometime this month.

“I wish I was going to be here … after the blowup,” said Wendi Weber, Northeast regional chief of the U.S. Fish and Wildlife Service. She predicted that the river, once open again, is “going to run fast, furious and beautifully.”

The steel rebar fortifying the dam will be taken away and recycled, while the concrete — an estimated 4,000 cubic yards — will be ground up and used as fill in restoring the river bank that had to be bulldozed to get at the dam. The park won’t be open again to the public until sometime next year.

American Rivers’ Irvin said he’s looking forward to that day. He said he’s fly-fished above and below the dam.

“I can’t wait to come back,” he added, “and see how the fish are benefiting from it.”