DIXON WON’T GIVE UP DESPITE COUNT: Baltimore Democratic mayoral candidate Sheila Dixon said Friday she isn’t ready to give up her quest to regain her old job, though the unofficial final tally from last week’s primary election showed her running behind state Sen. Catherine E. Pugh by about 2,500 votes, Ian Duncan and Yvonne Wenger report for the Sun.

HOGAN ANNOUNCED TECH ED GRANTS: Gov. Larry Hogan Friday announced $600,000 in grants that will be used to develop the first six high schools focused on helping students earn a high school diploma and an associate degree while also working in the private sector, writes Bryan Sears for the Daily Record. In November, Hogan announced the program, known as P-TECH or Pathways in Technology Early College High Schools, at Dunbar High School in East Baltimore. The General Assembly passed legislation creating the program in Maryland, which the governor signed last month.

PROGRESS ON CLEAN AIR: The editorial board for the Annapolis Capital writes that there is reason to celebrate Maryland’s air. There has been only one Code Red day in the past three years. The reasons for this are detailed in the Maryland Department of the Environment’s Maryland 2016 Clean Air Progress Report, which begins, “For the first time in 30 years, Maryland is very close to meeting all federal air quality standards.”

MD. ECONOMIC ZONES: Roger Campos, Gov. Larry Hogan’s business ombudsman, said creating economic zones in Western Maryland would be a good step to help boost the economy in the region, reports Greg Larry for the Cumberland Times News. Campos’ remarks were made during a luncheon in the Gira Center at Frostburg State University last week. Campos, Maryland’s first business ombudsman, said he reports directly to Hogan and acts as a “goodwill ambassador to businesses and helps to fix problems and challenges for businesses.”

PUBLIC RECORDS ARBITRATION: A system of binding arbitration could be a good next step for state agencies and the public when it comes to resolving disputes over public records, according to Maryland’s newly christened public access ombudsman. Bryan Sears of the Daily Record reports that Lisa A. Kershner told a group of journalists Thursday that while her position as a mediator lacks enforcement teeth, there is a model within state government that could be used as a model to eventually expand non-judicial options for resolving disputes over public records between the public and government agencies. 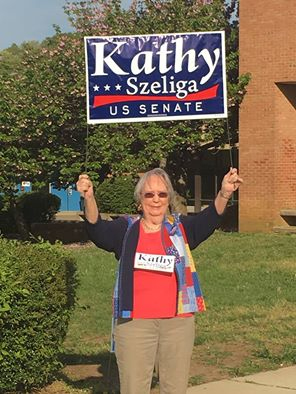 Senate candidate Kathy Szeliga wishes her mother a happy Mother’s Day and posts this picture of her campaigning mom on Facebook. Click photo to enlarge.

HOGAN: MASTER OF DIVERSION: When it comes to skipping over controversial issues that might undermine his political fortunes, Gov. Larry Hogan is a master of diversion. This technique has proved highly successful. He’s not about to let Donald Trump trip him up, writes political prognosticator Barry Rascovar in MarylandReporter.com. He’s keeping a mile-length distance between his political well-being and Trump’s candidacy. He can smell the toxic odors emanating from The Donald’s campaign.

SZELIGA PUSHES AGAINST CONVENTIONAL WISDOM: The conventional wisdom for the November election to replace Sen. Barbara Mikulski goes like this: The presidential race will drive Maryland’s heavy contingent of Democrats to the polls, virtually assuring the party’s nominee, Rep. Chris Van Hollen, will win. But, writes John Fritze for the Sun, Republican nominee Kathy Szeliga, a 54-year-old state lawmaker from Baltimore County, is already pushing back on that forecast. And she has at least one powerful argument in her favor: This year, the conventional wisdom has gotten it wrong at just about every turn.

PART 1: TRACKING CELL PHONES: Part One in the series “Tracking Your Phone” by Courtney Mabeus of CNS, appearing in MarylandReporter.com, examines how police use cell phone simulators to track phones, a practice originally designed for the battlefield, veiled in secrecy, and being challenged in court.

NEW CITY SCHOOLS CHIEF: As Sonja Brookins Santelises takes the helm of the state’s fourth-largest school system — Baltimore City’s — with one of the largest minority populations — she brings with her a deeply held conviction that poor, black children are too often treated as if they are intellectually inferior, reports Erica Green for the Sun.

NO FISHING, NO SWIMMING: The Inner Harbor and tidal Patapsco River posted failing grades in a water quality report card for a third consecutive year in 2015, casting doubt on a goal to make the waterways safe for swimming and fishing by the end of the decade, Scott Dance reports in the Sun.