ABSENTEE BALLOT ERROR: A portion of Maryland voters who requested absentee ballots in order to participate in this year’s elections erroneously received written instructions to use a No. 2 pencil when filling them out, despite the fact that the state’s system for reading the forms performs best when they are filled out in black pen, Kevin Rector reports in the Sun. However, voters who used pencil have “no need to worry,” said Nikki Charlson, the Maryland State Board of Elections’ deputy administrator. The error will not leave ballots filled out in pencil uncounted, she said, though it could require officials to replicate forms in pen for processing.

FUND-RAISING LOOPHOLE: Maryland state lawmakers running for Congress and local office are exempt from the state’s ban on fundraising during the annual legislative session — enabling them to take money from lobbyists and others with business before them, Fenit Nirappil reports for the Post.

OUT OF PRISON, VOTING: Reginald Smith stood at the corner of West North and Pennsylvania avenues, the epicenter of the riots that erupted in Baltimore a year ago. Ovetta Wiggins of the Post reports that Smith gripped a sample Democratic primary ballot. By the time he sat down in front of the computer screen Thursday, he shook his head, almost in disbelief. He was about to register his choice for mayor, U.S. Senate and president.“I’m actually nervous,” said Smith, who last voted more than two decades ago — before he went to prison for 14 years for attempted murder.

VOTING IN MARYLAND: Marylanders will vote for the Democratic and Republican nominees for president Tuesday, among other competitive races. Voters will select a member of each party to compete for an open U.S. Senate seat, as well as eight seats in the House of Representatives. Primary election voters in Baltimore City will also select each party’s nominees for mayor, comptroller, City Council president and 14 council districts. The Sun offers up a guide on voting in statewide races as well as in Baltimore City.

VOTING IN ARUNDEL: With the state’s primary election set for Tuesday, Annapolis Capital reporters interviewed voters from across Anne Arundel County to gauge their presidential preferences as well as the importance of local races. The unscientific survey found many voters, on each side of the political aisle, looking to upend the system.

LEN ON MSNBC: MarylandReporter.com’s Len Lazarick is scheduled to talk about Maryland primary on MSNBC at 9:30 a.m. Monday, but he wouldn’t be surprised if it didn’t happen. He’s been booked for morning shows on two national cable channels last week to talk about the Maryland primary, but gotten bumped by President Obama in Saudi Arabia and the death of Prince.

FEISTY BATTLES HEADING INTO PRIMARY: Candidates for offices from the presidency to Baltimore City’s mayor campaigned across Maryland on Saturday, making a final pitch to voters in what has become the state’s most gripping primary election season in decades, report Kevin Rector and John Fritze for the Sun. Rowdy battles for the presidential nominations, a testy Senate race to replace a matriarch of Maryland politics and a hard-fought mayoral contest that has forced the city to examine its past and future will all be on the ballot.

SANDERS RALLY: Len Lazarick of MarylandReporter.com reports on the Bernie Sanders rally that attracted thousands to downtown Baltimore City on Saturday. “They wanted to say they saw Bernie Sanders in the flesh, support his ‘political revolution,’ hear his New Yawk accent in the raw, and boo his references to Wall Street, Trump and Hillary,” writes Lazarick.

TRUMP RALLY: Len Lazarick of MarylandReporter.com drove 80 miles to see Donald Trump at the Hagerstown airport Sunday, and he didn’t get one of the many lousy,  vulgar T-shirts for sale. During the rally, every line out of Trump’s mouth was an applause line. Trump estimated he was looking at may 18,000 people at the rally. 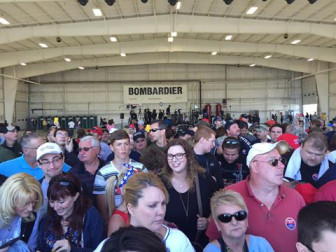 SYMBOLISM VS. SUBSTANCE: Tuesday’s primary election in Maryland has more drama and national attention than any in recent memory. Democratic voters, in particular, have an eventful choice to make in the U.S. Senate primary: Will they favor symbolism or substance? asks Barry Rascovar in a column for MarylandReporter.com. He goes on to compare Donna Edwards with Bernie Sanders.

LOTT BACKS SZELIGA FOR SENATE: Former Senate Republican Leader Trent Lott endorsed Del. Kathy Szeliga’s bid for Maryland’s open Senate seat on Friday — and used a letter to Republicans to argue Maryland could be a pickup opportunity for the GOP this fall, John Fritze reports for the Sun.

HARRIS BACKS SZELIGA: U.S. Rep. Andy Harris has endorsed Republican Kathy Szeliga to represent Maryland in the U.S. Senate. Harris and Szeliga were among a bevy of local Republican politicians and supporters when the Republican Central Committee of Talbot County opened its election headquarters Friday, Chris Polk reports in the Easton Star Democrat.

EDWARDS VS. VAN HOLLEN: The Baltimore-based Real New Network has a good 8-minute video summary about the race between Donna Edwards and Chris Van Hollen, exploring why the Democratic establishment supports Van Hollen and not Edwards.

TRONE ATTACKS RASKIN: The list of names scrolls up the screen for a second, just long enough to convey the point of David Trone’s new TV ad: Despite claims to the contrary, state Sen. Jamie B. Raskin, one of his principal opponents in the 8th Congressional District Democratic primary, takes money from people who lobby him, writes Bill Turque for the Post.

TRONE COULD WIN: “David Trone could be going to Congress,” writes Adam Pagnucco in Seventh State, and explains why, with the most spent on any congressional race in the country.

RASKIN COULD WIN: Adam Pagnucco of Seventh State also looks at Jamie Raskin’s strengths and weaknesses and why he could win the congressional race.

MATTHEWS COULD WIN: Kathleen Matthews is an attractive, polished female candidate – an advantage in any Democratic primary dominated by women, writes Adam Pagnucco in Seventh State. She has been a great fundraiser, excels on television and has run an intelligent campaign based on her strengths, and she could win a seat in Congress.

PARTY CHIEFS ON THE GENERAL: Chase Cook of the Annapolis Capital sat down with the executive directors of the state’s Democratic and Republican parties. These groups maintain neutrality during primaries, but they play a large role in the general election as the respective parties seek to build unity heading into the general election this fall.

SOME GOOD IDEAS: Dan Rodricks, in his Roughly Speaking column, writes about the pretty good ideas that are coming out of the minds of candidates who are running for Baltimore City Council.

EHRLICH STUMPS: Former Republican Gov. Bob Ehrlich spoke at a political fundraiser for Dan Schneckenburger, one of the Republican candidates for Cecil County executive, at the Upper Chesapeake Ballroom on Friday, writes Cheryl Mattix for the Cecil Whig. “I do believe our country is on the wrong path right now,” Ehrlich said. “It’s time to change the rules.”

WHY TAX CUT FAILED: The question of whether Marylanders would receive a tax cut this year came down to a fraction of a percentage point — 0.04, to be exact, writes Josh Hicks in the Post. That was the difference between the tax rate the state Senate wanted to apply to high earners and the rate that the more progressive House of Delegates said it could accept. When the two sides couldn’t agree, a proposal for paid sick leave — which proponents had planned to link with the tax-cut bill to generate support from Gov. Larry Hogan — also went by the wayside.

HOGAN ON ROUTE 113 WIDENING: The Salisbury Daily Times is reporting that Gov. Larry Hogan announced Friday plans for the final two phases that will complete Route 113 widening to a four-lane divided highway for the entire 38-mile stretch in Maryland from Pocomoke City to Delaware.