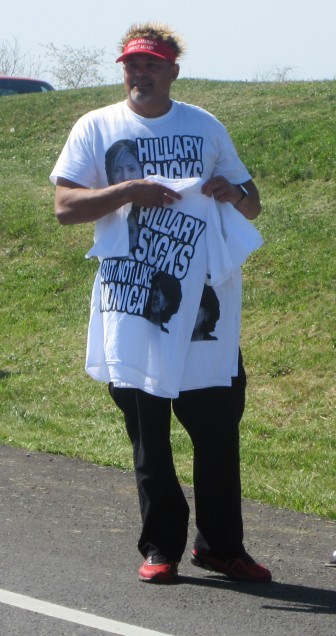 I drove 80 miles to see Donald Trump at the Hagerstown airport Sunday, and all I didn’t get was a lousy T-shirt. There were plenty of lousy, vulgar T-shirts such as “Hillary Sucks But Not Like Monica.”

They were far outnumbered by the “Make America Great Again” shirts, hats, buttons and other paraphernalia.

By 3:30 p.m., the hangar of Rider Jet Center was at capacity, and the Secret Service was turning away everybody — press, VIPs and thousands who had driven far to see the Donald.

Local Delegate Neil Parrott reported arriving at 10:30 a.m. after church and there were already 250 people in line for the show more than five hours off.

Roads were clogged, industrial lots were full, “No Parking at Any Time” signs were ignored, and thousands walked a half mile in from the main road, only to stand around when the hangar entrances were blocked. Hundreds watched from a hillside for the candidate to arrive, as he finally did in his Trump-emblazoned helicopter.

Even after hours of standing, the crowd was even more energized and boisterous than any seen at recent rallies for Bernie Sanders, Ted Cruz or John Kasich.

Every line out of Trump’s mouth was an applause line, some clapping louder than others, as were the constant cheers, hoots and bellowed shouts, like “Build the wall.”

“We’re going to build a wall, believe me,” Trump responded.

It was a stream of consciousness performance, veering from topic to topic, with lengthy asides and non-sequiturs.

Trump admitted it was more show than stump speech, peppered with criticism of the media coverage which he has artfully manipulated to lift his candidacy with little paid advertising and scant staff until recently.

“It’s so much easier to be presidential,” said Trump. “You think this is easy? I’ve been ranting and raving. I have to entertain 18,000 whatever the number of people we have here.”

Entertain he did, for over an hour, with more energy than explanation, and it was hard not to laugh, as the audience did, at some of his more outrageous asides and insults.

“We’ve got to be a little bit careful about changing” into a more presidential style, he said, given how successful he’s been.

Trump criticized the media cameras for focusing on him for his entire speech, as the video above does, and for not showing the size of the crowd, only “twisting like a pretzel” if a protester showed up. Then he complained about the lack of protesters, who were far away from the hangar, separated from Trump supporters by a small band of State Police. 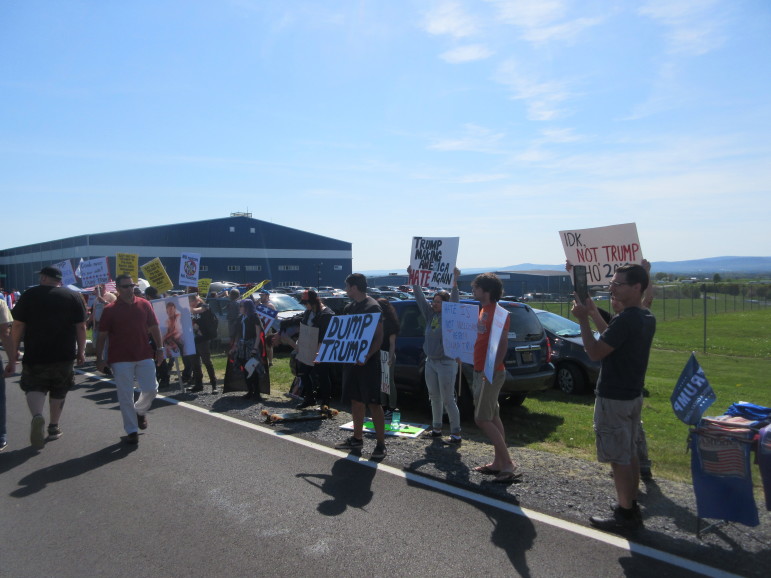 Trump has made a fool of almost every pundit and political reporter who predicted his demise or decline. Even now some are playing up the possible drama of an open convention with no clear winner on the first ballot.”I only care about the first ballot; we’re not going for the second, third.”

He said the people writing about a Trump loss at the convention are like short sellers betting that a stock will go down. He called them the worst people on Wall Street. “They’re almost as bad as the media.”

“We want to put it away,” clinching the nomination on the first ballot. Several times he expressed confidence that he would have the 1237 delegates needed.

“I have spent the least and I am number one … I’m winning by millions and millions of votes,” so how can either of the two left deny him the nomination? If that happens, “we’re going to have some folks who are going to be very, very angry.”

“It’s really an unfair system. The whole system is rigged.”

Trump spent little of the speech talking about policy, and mostly about winning — what he’s won so far, the people 14 people he’s knocked out of the race, “governors, senators …. experienced people… good people,” the people he wants to beat.

“On Tuesday, I’m expected to win all five” states, said Trump. “Maryland is looking fantastic” as is Delaware next door. He asked his staff to look into how many corporations he had registered in Delaware, a corporate haven that makes company registration fees an important part of its tax base. Was it five or six?

“I think we’ll make it easily” on the first ballot.

There were the usual attacks on “Lying Ted Cruz … I’ve never dealt with a liar like him.” The Texas senator used to be popular with evangelicals until they found out he lied, Trump insisted, and then they turned to him.

“You put the bible up high [holding his hand up] and then put it down, then you lie,” said Trump, referring to Cruz.

He mocked the politicians who are now calling him to make up after attacking him during the campaign. “It’s a phony, phony business, this politics.” But then he admitted that some of his own disdain for opponents was for show.

“You know in about four or five weeks [Ted is] going to be one of my best friends,” Trump said. “I like people after defeat.”

Looking ahead to Hillary

Trump was already looking ahead to the general election.

“I really want to fight Hillary. I don’t know whether it will be easier or harder [than his primary wins], but I want to beat her. That will be so much fun.”

He doesn’t buy the conventional wisdom that “Crooked Hillary” will beat him badly.

“More voters will turn out” for that contest, he said, much as his presence has raised turnout for the primaries. “We’re going to unify the party.”

“The last person she wants to run against is Donald Trump.”

He attributes some of that to the loyalty of his supporters. He wanted to hug a woman he saw on TV who said of him: “There is absolutely nothing that man can do that will make us vote against him” 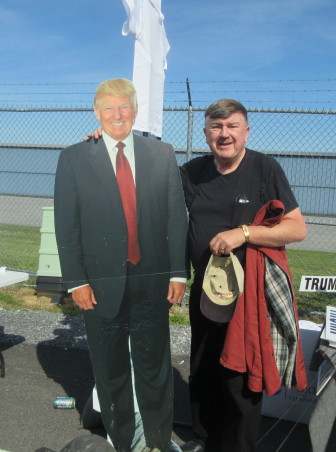 As close as Len Lazarick got to Donald Trump

Trump did veer briefly into a few issues, such as job losses and trade policy. He promised to punish manufacturers like Carrier moving to Mexico with 35% tariffs if they outsource jobs. “They have to have consequences.

“I’m a free trader, but you can’t have free trade when your leaders are either paid off or stupid,” said Trump. “I’m not angry with China. I wish our leaders had the same brain power.”

“Yes, the products will be more expensive [if they’re made in America], but we’ll have millions of jobs. They never talk about that, especially the media.”

Trump talked briefly about the Middle East and strengthening the military, and eliminating Common Core (though it is not an official federal education mandate.)

But at the end he turned back to maintaining his winning streak.

“We need the big mandate. Maryland is so important.”

“We’re like fighters.” Comparing boxing officials to party leaders, “The judges can’t help if I knock that guy on his ass.

Podcast: March and Rally for Life