‘ROUGH RIDE’ BILL KILLED: A Senate committee has killed a proposal that would have fined police officers $10,000 if someone was hurt while riding in the back of a police van, reports Erin Cox for the Sun. The legislation was spurred in part by the death of Freddie Gray, who prosecutors say suffered a fatal spinal cord injury in the back of a Baltimore police van last year. Six police officers have been charged in his arrest and death.

HOGAN DERIDES SPENDERS: Gov. Larry Hogan convened a news conference last week to blast lawmakers for trying to spend too much money. The two biggest culprits happened to be fellow Republicans. And the costliest proposal is an idea Hogan has also pushed, Erin Cox of the Sun is reporting.

ANOTHER 30 YEARS FOR NICE BRIDGE? The only practical connection between Southern Maryland and Virginia is a steep 76-year-old toll bridge with two narrow lanes, no shoulder, no sidewalk and no barrier in the median. According to the Hogan administration, that’s good enough for at least another 30 years. Michael Dresser of the Sun writes that local residents disagree, but the administration’s generally popular decision to cut tolls last year has contributed to the state having little money for projects like replacing the Harry W. Nice Memorial Bridge.

CUTTING KEY BRIDGE TOLLS: One by one the sponsor and a few supporters stepped up to testify in support of a bill to eliminate tolls for some drivers who use a turn-around area at the Francis Scott Key Bridge. But it was who was absent that drew the attention of a number of lawmakers, writes Bryan Sears for the Daily Record. Last summer, Gov. Larry Hogan announced the reduction of tolls for users of that turnaround. But at the hearing, no one from the department or the governor’s office signed up to testify on the bill.

VOTE DELAYED ON BILL ADDRESSING TEEN DRINKING ENABLERS: The House Judiciary Committee on Friday delayed until this week its vote on legislation that would allow judges to imprison adults who host underage drinking parties, writes Steve Lash for the Daily Record. The committee’s action followed the Senate’s passage of similar legislation, SB 564, by a vote of 46-0 on March 3.

BREATHALYZER USE EXPANSION: A long-sought bill to require more drunk drivers in Maryland to have Breathalyzers installed on the dashboards of their cars cleared a major hurdle on Friday when it received preliminary approval in the House of Delegates, Ovetta Wiggins reports for the Post.

CROSSOVER DAY: Lawmakers expect to be busy this week as a procedural deadline looms for getting bills passed, writes Pamela Wood in the Sun. Though the General Assembly’s 90-day session doesn’t end until midnight on April 11, next Monday, March 21, is “crossover day.” That’s the date by which bills must be approved by at least one chamber to be guaranteed consideration in the other chamber. As such, both chambers expect to be busy passing a flurry of bills before the crossover deadline.

JUDGESHIPS ADDED: Both houses of the Maryland legislature have now unanimously approved their own versions of bills to create 13 new judgeships, MarylandReporter is reporting. But the 11 new Circuit Court judges Gov. Larry Hogan will get to appoint will have to run in contested elections to keep their jobs. A Senate committee has already rejected a proposal that that their terms be shortened from 15 years to 10, and they be subject to reappointment by another governor, the same as District Court judges.

RIGHT TO SMOKE DOPE? NOPE: Marylanders still have the right to remain silent, but they won’t have the right to remain high, Michael Dresser of the Sun reports. A House committee decisively rejected a proposed amendment to the state Constitution that would have enshrined marijuana usage as a right. The panel then narrowly approved a bill that would make the use of the drug in a public place a criminal offense, as it was before 2014.

JUVIE SHACKLING: The Baltimore girl, 15, stood in front of the judge that spring day two years ago. She’d stolen toilet paper, laundry detergent and clothes because her grandmother was sick and they had little money. The judge said it was time for the serial shoplifter to learn a lesson. Erica Green of the Sun reports that the judge ordered a weekend stay at one of the state’s juvenile detention centers — where she would be subjected to two increasingly controversial practices — shackling and strip-searches.

ROADSIDE FUNDRAISING: Nine years after the General Assembly banned panhandling along roads in Anne Arundel County, lawmakers are considering a measure that would make the practice legal for firefighters and some other groups, reports Amanda Yeager for the Annapolis Capital. Under House Bill 102, fire companies as well as charitable groups and religious, fraternal, civic and war veterans’ organizations could request a permit from the county to collect money along the side of the road for up to seven days a year.

OPEN MEETINGS: Last year, 34 complaints were submitted to the state’s Open Meetings Compliance Board. This year, proposed legislation in the General Assembly is designed to enhance enforcement of the law by requiring more training of public officials — and more reporting on violators by the attorney general’s office. The bill would require all members of a public body to complete online training on the requirements of the Open Meetings Law within 60 days of becoming an officer, and every two years thereafter, Tamela Baker reports for the Hagerstown Herald-Mail.

HOGAN’S EMAILS: While the General Assembly’s presiding officers rely on staff to read and respond to email on their state accounts, Gov. Larry Hogan is in the driver’s seat of his. The 59-year-old Republican is blunt with his staffers when it comes to defending his administration and protecting his image. Brian Witte of the AP obtained hundreds of pages of emails from the governor and leading lawmakers over a week’s time in a Public Information Act request as part of a Sunshine Week initiative.

SAVING OPEN SPACE: In an op-ed for the Sun, Del. Maggie McIntosh writes that, “There is an old saying that you get what you pay for. Now is the time for Baltimore voters and those throughout our state to get the open space funding that was promised to them decades ago. Recently, the House Appropriations Committee, which I chair, held a hearing on a bill that will restore full funding for Maryland’s premier green infrastructure program.”

HOGAN’S PARTISANSHIP: Columnist Barry Rascovar, writing in MarylandReporter, says that perhaps someday Gov. Larry Hogan Jr. will learn how to govern and deal with Maryland’s co-equal branch, the General Assembly. So far, though, it hasn’t happened. Most of the time Hogan stays in partisan campaign mode, pretending he can have what he wants simply by reminding legislators of his popularity in polls.

AA DEMS HOST EVENT ON TRUMP: Rick Hutzell of the Annapolis Capital writes that Anne Arundel County Democrats will hold a meeting in response to the presidential candidacy of Republican Donald Trump on Wednesday in Annapolis. The District 30 Democratic Club said the “Stop the Madness” event, co-hosted with other county Democratic and community groups, is a response to the celebrity billionaire’s “intolerance and extremism.”

EDWARDS TAKES LEAD: U.S. Rep. Donna Edwards, long seen as an underdog in the race for Maryland’s open U.S. Senate seat, now has “a slight lead” and is winning among several critical Democratic constituencies, a new poll for The Baltimore Sun and the University of Baltimore shows. John Fritze writes the story for the Sun.

BALTIMORE BECOMES PRIME VOTE TERRITORY: Charm City has become the key battleground in Maryland’s competitive Democratic Senate primary, thanks to a cheap media market and a lack of homegrown candidates. With polls showing Chris Van Hollen winning his base of Montgomery County and Donna Edwards her home of Prince George’s County, both candidates are focusing their firepower on Baltimore, whose voters are up for grabs, reports Rachel Weiner in the Post.

ONE VOTE AT A TIME: In an article in the Post, Arelis Hernandez writes about how candidates win races — one vote at a time, focusing on the 4th Congressional District race. 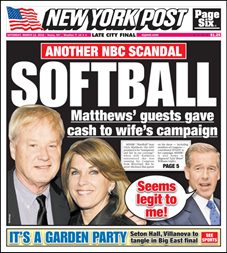 MATTHEWS’ GUESTS DONATE: Chris Matthews, who has made glowing references to his wife Kathleen on his show without mentioning her campaign for the U.S. House, hasn’t uttered a word about the contributions his 62-year-old wife has received from his TV guests, reports Jamie Schram for the New York Post. The story was on the cover of the cheeky New York tabloid.

8th DEMS TOUT POLLS: Campaigns in general disclose internal polling only when they believe it shows good news for their candidates. This weekend, two contenders for the Democratic nomination in Maryland’s 8th Congressional District did just that, publicly sharing two distinctly different sets of numbers, Bill Turque reports for the Post.

ENDORSEMENT BLUES: Thursday’s announcement that the African-American Democratic Club of Montgomery County had voted to support state Sen. Jamie Raskin in the District 8 congressional race roiled some rival political camps—amid questions over the degree to which the endorsement reflects the sentiments of the county’s sizable bloc of black Democrats, Louis Peck reports for Bethesda Beat.

8th REPUBLICANS DEBATE: Republican candidates for the 8th Congressional District cooly discussed issues such as immigration, the Affordable Care Act, the elderly, and foreign policy with Asia at a debate hosted by the League of Women Voters of Maryland held at Hood College. Candidates Shelly Skolnick, Dan Cox, Jeffrey Jones, Liz Matory and Aryeh Shudofsky touched on what they would bring to the table if elected, then calmly debated each subject, writes Brandi Bottalico for the Frederick News Post.

ONE CANDIDATE STANDS OUT IN GOP FIELD: There were few policy differences in evidence Thursday night as the eight Republicans vying for the seat now held by Democratic Rep. John Delaney debated for the third time this year. But the session again served to highlight a split on abortion between the only woman in the field, national security consultant Amie Hoeber of Potomac, and her seven male opponents, as the issue was discussed in starkly personal terms, Louis Peck reports in Bethesda Beat.