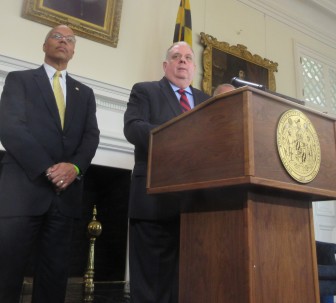 From day to day, lawmakers in Annapolis don’t know what to expect from Gov. Larry Hogan, Jr.

Will it be “Good Larry” who moderates his comments, works to find middle ground and comes out making everyone happy?

Or will it be “Bad Larry” who uses heated political rhetoric; sounds false warnings of doom to energize his conservative base, and alienates the very legislators he needs to accomplish things?

Perhaps someday Gov. Larry Hogan Jr. will learn how to govern and deal with Maryland’s co-equal branch, the General Assembly. So far, though, it hasn’t happened.

Most of the time Hogan stays in partisan campaign mode, pretending he can have what he wants simply by reminding legislators of his popularity in polls.

Then he bumps up against the hard reality of American politics: Without support from the legislative branch, no state’s chief executive can make headway toward his goals.

The “Good Larry/Bad Larry” dichotomy was on full display last week in the State House.

On Tuesday , “Bad Larry” went ballistic because Democratic lawmakers aren’t about to gift-wrap for him new budget powers so he can make deeper cuts in spending.

It was a bravura Thursday performance after an embarrassing Wednesday display of staged anger.

The Republican governor can’t decide whether he wants to govern or campaign.

Governing requires that he be practical and pragmatic, compromising with Democrats so he can achieve partial victories.

Campaigning requires that he abandon any chance of winning over lawmakers and instead launch a continuous barrage of verbal assaults on Democratic legislators in preparation for the 2018 elections – still two-and-a-half years away.

Usually, Hogan has chosen to stay in campaign mode.

On Tuesday , he condemned Democrats [See editor’s note at end of column] for not taking seriously his bill to eliminate many of the spending mandates established by legislators over the years. Asking any legislature to cede budget power to the governor is a non-starter – unless the governor can provide some persuasive reasons.

Hogan failed to do so.

Instead, he blamed Democrats for “eight years of financial mismanagement” and Maryland’s current “precarious fiscal situation.”

Neither statement is true.

The state’s past fiscal woes stemmed from the deep and long Great Recession. As for that “precarious fiscal situation,” it doesn’t exist – not when Hogan is sitting on a $300 million budget surplus and $1 billion in a “rainy day” account.

It’s campaign hyperbole, as was the chart Hogan continually pointed to at his Wednesday press conference, the one claiming Democrats seek to impose on Marylanders $3.7 billion in spending mandates this session.

Hogan already has more budget power than any other governor in the country. He doesn’t need extra authority to short-circuit spending mandates in troubled economic times.

Why? Because he already can make drastic cuts in two different ways – with approval from the Board of Public Works, or with the cooperation of state lawmakers through a budget reconciliation bill.

The same is true of his earlier wailing over Democratic bills forcing Hogan to explain the rationale for building roads and bridges that appear to be low-priority items.

Hogan claimed in almost hysterical terms how this was a “reckless power grab” and a “thinly veiled power grab.”

The package of bills doesn’t stop Hogan for doing whatever he wants in selecting the state’s transportation projects. The bills simply force him to explain why he’s picked road project F over road project A on the state’s priority list.

Senate President Mike Miller clearly explained that these bills remove “the mystery of how, why and where roads get built.” The measures encourage government transparency while leaving intact the governor’s road-selection powers. What’s wrong with that?

Hogan and his second-floor Republican ideologues are good at promoting phantom crises they blame on Democrats. They’re applying national GOP tactics to Maryland: Make this a fight between good Republicans and evil Democrats and point an accusing finger at the party of evil.

No wonder Hogan has won few legislative victories in a Democratic-dominated General Assembly. At the moment, it looks like he’s headed for a large basketful of defeats this session, too.

That’s why Thursday’s supplemental budget from Hogan is so intriguing. The governor negotiated deals with Democrats on a host of issues and wound up getting praised by his opponents for working out win-win compromises.

That victory could set the stage for more moments of Hogan playing the role of Great Conciliator as the General Assembly moves rapidly toward its conclusion.

But he won’t get very far in that direction if he continues to alienate and infuriate key lawmakers with his “Good Larry/Bad Larry” routine.

Editor’s note: After the column was published Sunday night, Doug Mayer, the governor’s deputy communications director, wanted to point out that “At no point did the governor blame mandates solely on Democrats in the General Assembly. In fact, the word was never uttered by anyone during the entire press conference.”

As pointed out in a Baltimore Sun story published Saturday, which said that two Republican delegates were the “worst offenders” in proposing mandates this session, “the governor was well aware of the bipartisan nature of the mandates and that he never called out one party or another,” said Mayer.