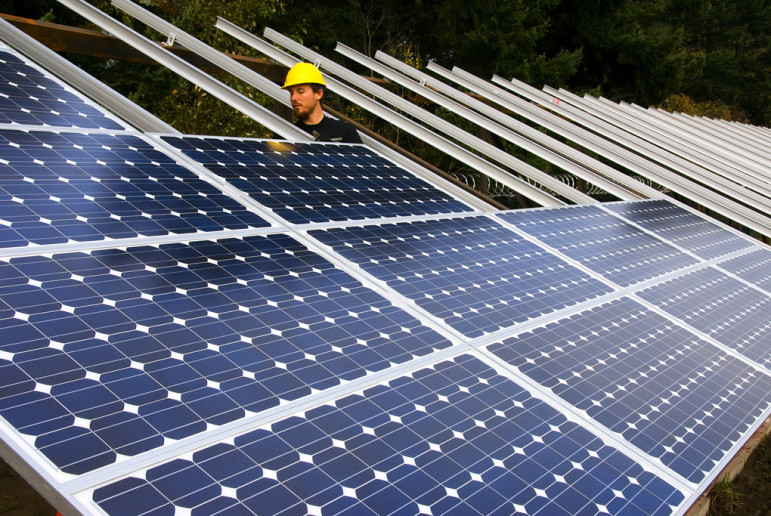 Legislators, environmental activists and renewable-energy workers congregated outside the Maryland State House Thursday, trumpeting statewide polling results that found a majority of respondents — across ideological and geographical lines — in favor of a bill that sets new goals for renewable energy consumption and puts $40 million aside for more clean-energy jobs training.

Overall, 74% of those surveyed said they were in favor of the Clean Energy Jobs Act, according to the statewide poll conducted by Opinion Works, an independent research firm. Majorities of polled Republicans, Democrats and independents all supported the act, as did those in rural, urban and suburban communities in Maryland.

The Clean Energy Jobs Act aims to combat climate change by expanding the state’s renewable energy industry with a $40 million investment in training for clean energy jobs, which includes providing pre-apprenticeship job training for careers in the clean energy industry and grants to help provide loans to women- and minority-owned small businesses.

The bill also mandates that Maryland fuel 25% of its electricity with clean energy sources like wind and solar power by the year 2020.

With a little over one dozen clean energy workers standing behind her, state Sen. Catherine Pugh, D-Baltimore, spoke about the importance of the bill, which supporters tout as the largest investment in clean-energy jobs training in state history.

“It’s not just about the jobs; it’s about a cleaner, greener Maryland,” said Pugh, the sponsor of the Senate bill.

When asked about the bill, Bob Hainey — a spokesman for Pepco, an electric power company serving Maryland residents — said “we are monitoring the legislation as it moves through the process.”

After the rally, members of the House Economic Matters Committee heard testimony about the Clean Energy Jobs Act bill.

Multiple representatives from the renewable energy industry and environmental advocacy groups hailed the bill as fiscally feasible and tough on climate change.

But others were much less enthusiastic about the bill.

Tom Dennison, the government and public affairs director of the Southern Maryland Electric Cooperative, said the legislation means Marylanders would pay a little extra. If it passes, the price of complying with the state’s Renewable Energy Portfolio Standard — which sets the percentage of energy coming from renewable sources for Maryland utilities — will jump roughly $1 per month for the “average residential customer,” according to a projection from SMECO.

“It is an increase, and an increase I wanted to point out to the committee,” Dennison said.

There are nearly 4,300 solar jobs in the state today, according to information from the Solar Foundation, an independent organization that seeks to increase understanding of the industry. This bill could produce up to an additional 1,000 solar energy jobs per year and 4,600 wind energy jobs in total, according to supporters.

Advocates also claim that the bill, if passed, will grow the solar industry by up to 300 megawatts, which could expand solar power to 26,000 Maryland homes per year. The bill is also expected to create demand for around 1,000 extra megawatts for wind energy and other renewable sources.

The Hogan Administration does not have a position on the Clean Energy Jobs Act, said spokesman Matt Clark, but it has “ongoing serious concerns” about spending mandates like the one in the bill.

A hearing for Pugh’s bill is scheduled for March 8 in the Senate Finance Committee.