END OF LIFE OPTIONS: Maryland, a state where lawmakers abolished the death penalty and made same-sex marriage legal, would seem fertile ground for an aid-in-dying bill. But the state also has deep Catholic roots and a large African American population, and both of those communities have long opposed assisted suicide for the terminally ill, reports Ovetta Wiggins for the Post.

DRUNKEN DRIVING LAWS: Steve Lash of the Daily Record writes that the drunken-driving-related deaths in Montgomery County last year of two recent high-school graduates and a police officer have spurred legislation to allow judges to imprison adults who host underage-drinking parties, permit drunken-driving victims to get punitive damages and increase the punishment for drunken motorists who kill people.

A SAY OVER SUPERINTENDENT: The Maryland Senate will decide this week whether it should have a say in who is chosen as the next state superintendent of schools, Ovetta Wiggins reports for the Post. The Senate was scheduled on Friday to vote on a bill that would change the selection process of the state superintendent. Instead, it delayed action after questions were raised about whether the Senate has the legal authority to confirm the head of the state’s school system.

FROSH SEEKS REVIEW OF ASSAULT RIFLE RULING: Maryland Attorney General Brian Frosh is seeking a review of an appeals court decision that dealt a blow to the state’s 2013 law that bans assault rifles. Frosh on Friday asked the full federal Fourth Circuit Court of Appeals to review a ruling from earlier this month that sent a case on the assault weapons ban back to a lower court for review. The law has remained on the books during the legal challenges, Pamela Wood of the Sun reports.

HOGAN SEEKS FEDERAL AID: Gov. Larry Hogan on Friday asked for federal disaster aid for the counties that were hit by last month’s winter storm. Hogan asked President Obama to make a disaster declaration for Maryland, which would make the state eligible to receive federal assistance for the response to the storm. Maryland Emergency Management Agency has been working with local governments and the federal government to assess the damages of the storm, which are put at $34.2 million in early tallying.

CARROLL PILOTS STATE DRUG TREATMENT PROGRAM: Carroll County is poised to serve as a model for treating substance abuse across the state. County Health Officer Ed Singer said the change calls for the involvement of private health care providers, who will then be reimbursed using funds provided by the state. This replaces the current system for funding treatment at the county level, in which a grant is provided to local health departments with a fee-for-service model, Heather Norris writes in the Carroll County Times.

POT SNIFFING K-9s IN LIMBO: Nero, a 3-year-old German shepherd-Malinois mix, has been on the front lines of the fight against drugs in Carroll County for the past two years. But after the General Assembly voted to make smoking marijuana in public a civil offense, Nero may be forced to hang up his leash.The problem is that  most drug dogs in Carroll County are trained to identify marijuana, Heather Mongilio writes in the Carroll County Times.

SINKING HOGAN? Democrats have said their blueprint for defeating Gov. Hogan involves boosting voter turnout in the state, which heavily favors their party in terms of registration, and allowing Hogan to sink himself with conservative policies. So far, with Hogan’s approval ratings soaring above 60% in recent polls, neither approach appears to be showing much success, writes Ovetta Wiggins and Josh Hicks in the Post.

HOGAN AT HIS WORD: The editorial board of the Sun urges Gov. Larry Hogan to take a few steps back. “We get that the Democrats in Annapolis aren’t exactly welcoming Gov. Larry Hogan with open arms or jumping to enact his agenda. They have tried on a number of fronts to hem in his authority — an issue, by the way, on which we have taken his side twice in the last week — and they overrode all six of his vetoes. But Mr. Hogan does himself no favors by falling into the trap of disdain for the legislature that has bedeviled any number of his predecessors.”

CHAMBERS’ VOICES IN LOCAL PROCESS: Does Anne Arundel County have a central chamber of commerce that represents all of its business interests — or different chambers for different regions? That’s the debate touched off, at both county and state levels, by County Executive Steve Schuh’s proposal to rotate a seat on the School Board Nominating Commission among the county’s six chambers of commerce, reports Shantee Woodards for the Annapolis Capital.

EDWARDS-VAN HOLLEN DEBATES: The two leading Maryland Democrats running to replace retiring Sen. Barbara A. Mikulski have agreed to four debates, including two that will be broadcast on television, John Fritze  writes in the Sun. 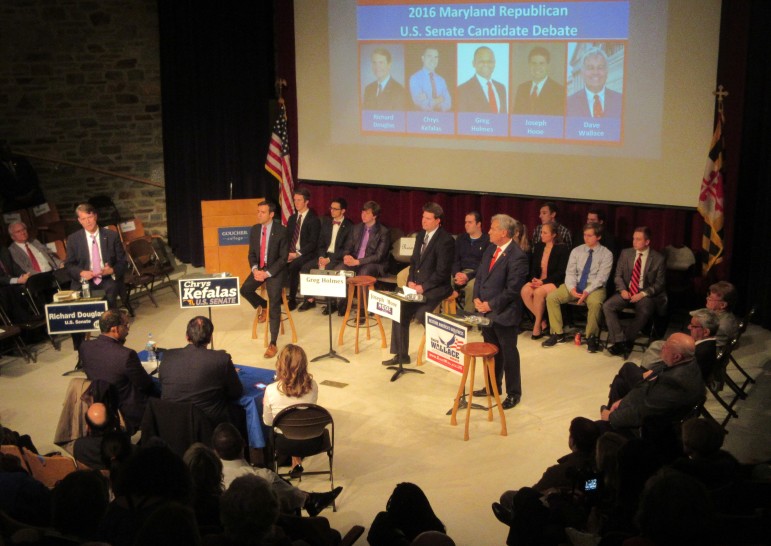 SENATE RACE SPENDING: Candidates in Maryland’s competitive congressional contests are increasing their spending significantly, with the two leading Democrats for Senate burning through cash faster than they’re taking it in, a review of recent campaign finance reports shows, John Fritze writes in the Sun.

PRESIDENTIAL POLITICS & MARYLAND: Del. David Moon, in a guest column at Maryland Juice, writes that this year’s presidential primaries have been taking place in the midst of the Annapolis legislative session. But he’s finally started tuning in to the national horse race, and he’s noticing some fascinating data points that Maryland politicos might want to consider. One takeaway: He believes that in Maryland, that the battle for the White House shows the impact of a recession-era (and growing millennial) electorate finally registering.