BIG BUCKS IN GAMBLING FIGHT: According to data compiled by iSolon.org and VotersEdge.org from the Maryland State Board of Elections website, ballot issue committees have raised $51.3 million to spend on Maryland’s statewide gambling question, Question 7. This is not only the largest amount spent on a single ballot proposition in Maryland’s history; it exceeds the previous record by 51%, J.H. Snider writes in Patch.com.

Maryland voters are sharply divided over a ballot proposal that would allow a Las Vegas-style casino in Prince George’s County, according to a Washington Post poll that shows widespread doubt that the measure would boost education funding as advertised.

GAY MARRIAGE POLL: John Wagner, Aaron Davis and Peyton Craighill write that a new Washington Post poll has found that Maryland voters are poised to approve same-sex marriage at the ballot box next month, a potential watershed moment in the history of a right that has been granted by courts and state legislatures but never by a popular vote.

Polls in other states with gay marriage on the ballot are also showing the measures might pass, Daniel Leaderman reports in the Gazette.

RELIGIOUS VIEWS: More clergy are speaking out for gay marriage, saying that it’s the government’s job to ensure fairness to all, while others are standing firm in their belief that gay marriage is an attack on traditional marriage, reports John Rydell for WBFF-TV.

DREAM ACT SUPPORT: A Washington Post poll finds that Maryland voters broadly support a measure – 59% to 35% – that would allow undocumented immigrants to pay in-state tuition rates at public colleges and universities,  A referendum on the law, known as the Dream Act, appears as Question 4 on the November ballot, write Aaron Davis and Jon Cohen of the Post.

DREAM STUDY: The AP’s Erin Durkin reports in Cumberland Times News reports that, contrary to what critics say, students are not at risk of being shoved out of spots in Maryland community colleges or universities if the Dream Act is upheld, says a new University of Maryland, Baltimore County study released this week.

THE REFERENDUMS: In this Daily Record podcast, Alexander Pyles and Danny Jacobs discuss the ballot initiatives on expanded gambling, the Dream Act and same-sex marriage, as well as what the proposed redistricting map and a pterodactyl have in common.

CONFUSION ON MOPED LAW: A new law requiring motor scooter and moped users to wear helmets and eye protection has riders confused as to what should be shielding their eyes, writes CNS’s Chris Leyden in the Salisbury Daily Times. According to the law, riders who do not have a windscreen on their scooter or mo-ped must have either a visor on their helmet or some other type of eye protection.

OUTPACING IN FUNDRAISING: Congressional incumbents in Maryland are crushing their challengers in the crucial fundraising contest, except in the highly competitive 6th Congressional District, writes Len Lazarick for MarylandReporter.com.

LaFERLA, HARRIS PART I: Challenger John LaFerla, a write-in candidate, and incumbent U.S. Rep. Andy Harris are interviewed by Cecil Whig staff concerning the economy and health care is this first segment of a two-part series.

CARDIN ON SENIOR HEALTH CARE: U.S. Sen. Ben Cardin had planned to talk about protecting Medicare and Social Security at the Urbana Senior Center, but about 20 people who showed up yesterday to meet the senator focused his 90-minute discussion on health care for seniors, writes Ike Wilson in the Frederick News-Post.

REPUBLICANS OUTNUMBER DEMS IN CECIL: Voter registration ended Tuesday, and the totals are still being entered into the computer system, but Cecil County Election director Evelyn Potter said for the first time the number of registered Republicans has surpassed the number of registered Democrats in Cecil County, reports Cheryl Mattix for the Cecil Whig.

PHONE SYSTEM SOLUTION? Three months after top city officials rejected a contract to install a new municipal telephone system, Baltimore City Mayor Stephanie Rawlings-Blake’s chief information officer and Comptroller Joan Pratt met yesterday to talk about what to do next, writes Luke Broadwater in the Sun. The administration proposed a memorandum of understanding between the two feuding offices that would create a commission to oversee the city’s phone system, which has been the subject of heated debate.

INDEPENDENTS GROWING: In Maryland, the Democratic and Republican parties continue to grow their numbers, but the fastest-expanding segment of the electorate are unaffiliated political independents, Benjamin Ford writes in the Gazette.

REDISTRICTING: The Gazette’s Holly Nunn takes a look at the battle over congressional redistricting and what other states have done to remove some of the politics from the process.

ALSTON ARROGANCE: Barry Rascovar in hi Gazette column writes about Tiffany Alston and her attempt to hold onto her legislative seat despite her guilty plea on campaign finance misuse. 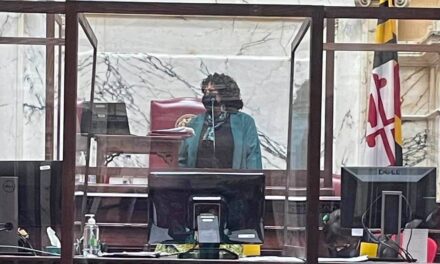